Wednesday night was one of the most pivotal evenings of the entire CBA saga that the NHL and NHLPA have found themselves embroiled in for the past several months. Negotiations were tense and fraught with high emotions, but in the end the two sides made progress on several key issues, and things appear to be at least headed in a positive direction, although an agreement still isn’t imminent according to sources.

The lockout has already cost the league a significant amount of its season, with games having been cancelled through December 15th, as well as the Winter Classic in Ann Arbor, Michigan between the Detroit Red Wings and Toronto Maple Leafs. The NHL All-Star Game, set for Columbus, was also cancelled recently, meaning the league has already shut down its two signature events due to the lockout.

Sticking with those cancellations for a moment, the NHL handled the two event postponements in completely different ways. The Winter Classic at the Big House at the University of Michigan was being rightly hyped as one of the biggest events in the history of the sport. A huge deal was made of the festivities in downtown Detroit at Comerica Park, home of the Detroit Tigers, where the alumni game was going to take place, and the allure of potentially having the highest-attended hockey game in history at the Winter Classic was one that was truly intoxicating for Commissioner Gary Bettman and company. In fact, the league was so enamored with the idea of a Big House Winter Classic that they immediately announced that the Wings would get the next one in 2014 when they cancelled the event back in November. 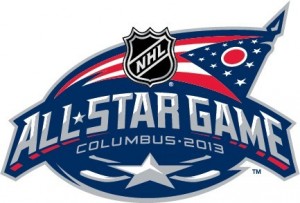 When Bettman announced late last month that the All-Star Game was also being cancelled, however, he did not make the same promise that Deputy Commissioner Bill Daly did when cancelling the Classic, opting instead to simply apologize to Columbus fans for the aborting of the game and festivities surrounding it. This was, frankly, a mistake on the league’s part, and one that it needs to rectify in short order if and when a new CBA gets ratified.

The league has been down this road on a couple of occasions in recent years. When they cancelled the 2005 All-Star Game in Atlanta, they ended up making it up to the Thrashers by staging the contest at Phillips Arena in 2008. They were forced to skip the game because of the 2006 Olympics in Italy, but the game did get returned to Atlanta in fairly short order.

The Phoenix Coyotes, however, were not so lucky. They were chosen as the host of the game in the 2006 season, but the game ended up being cancelled because of that aforementioned Olympiad. In years following, the uncertainty surrounding the team’s ownership, as well as the need to repay Atlanta for their lost game, has led to the Valley of the Sun never getting its hosting duties back. That will likely change whenever Greg Jamison completes his deal to purchase the team, but the fact of the matter is that we are already going on seven years since the game was taken away from Phoenix, and a similar fate would be completely unacceptable to fans in Columbus.

No, the All-Star Game isn’t the end all be all of hockey events, and no, it isn’t as big of a deal as if Columbus were to get a Winter Classic, but even still, there is a certain degree of civic pride that goes into being the town fortunate enough to host the game. Whether it was in Raleigh for the 2011 edition when the player draft was first instituted, or in Ottawa last year when fans thought it might be the final time they’d see Daniel Alfredsson suit up in the exhibition, the All-Star Game always has the potential to captivate the hockey world, and the beneficiary of that attention is the city hosting it. The financial benefits of hosting a game are also worthy of consideration, and judging by Columbus’ admirable job in hosting the 2007 NHL Entry Draft, they showed that they could put on a good show for the league, and an All-Star Game was going to be a chance for the league to give the Blue Jackets a stage to shine once again.

As a new CBA is (hopefully) nearing ratification by the owners and the players, it would behoove Gary Bettman to make sure that Columbus gets taken care of, and to announce that they have been awarded (assuming the players will be allowed to participate in the Sochi Olympics in 2014) the 2015 All-Star Game. It is the right thing to do, and would give hockey in Ohio’s capital city the boost of confidence that it so desperately needs after an offseason that has not only seen a lengthy lockout, but also the departure of the greatest player in franchise history.

It may seem like this is one of those backburner stories that can be held off on for a while, especially in the afterglow of a new agreement that green lights hockey for puck-crazed fans, but this kind of attention to the feelings and desires of fans would be a positive step forward for the league after the PR nightmare the work stoppage has been.

Columbus has been the butt of jokes for long enough. There’s plenty of time for dissecting and insulting the moves that Scott Howson and company have initiated, but for the sake of fans in the area, let’s hope that we aren’t still arguing that the city should get an All-Star Game when 2020 rolls around.