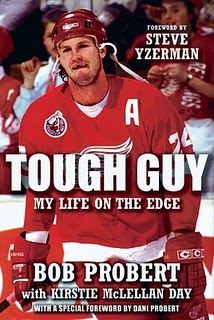 “Hockeynistas,” almost by definition, have a disdain for other sports.

PBS recently released “League Of Denial,” a devastating documentary examining the effects of chronic traumatic encephalopathy (CTE) among NFL players.  CTE is a sadistic killer.  It slowly ruins the lives of those afflicted with it, turning its victims into confused, frightened, violent juggernauts.  Victims of CTE often turn to drugs and engage in other high-risk behaviors, and suicide becomes the final method of escape.

That years of ferocious physical contact can result in brain damage is a “duh” observation.  It’s the intrinsic horror of CTE that is shocking, and the possibility of the disorder terrorizing other contact sports, like hockey, is something to be taken seriously.

As tough as hockey is, it does not reach the level of violence found in football.  Skull-rocking hits occur in every play on the field, but only once or twice a game on the ice.  The average weight of an NFL player is 248 pounds.  The average weight of an NHL player is 204 pounds.  Advantages in weight do not serve hockey players like they do football players.  Hockey is a game based largely on speed, and unnecessary weight would slow skaters down.  But this speed causes laymen to wonder if differences in weight can be “overcome.”

The hits concussing Sidney Crosby were nothing remarkable.  #87 did not get “jacked up” before he missed over a year of hockey.  Could the speed making hockey so exciting be the culprit in this case? And how about the boards? The boards regularly act as a reverse-battering ram causing damage, not a shield preventing it.

Unlike Sidney Crosby, ex-NHLers Bob Probert and Derek Boogard were enforcers: men paid to administer and absorb hits to the head.  Both Probert and Boogard died young, 45 and 28, respectively, and autopsies showed both men suffered from CTE.  Substance abuse raises questions as to how much a role CTE played in the deaths of these players, but the brain-killing disease has knocked on the NHL’s door and the knocks could get louder.

Bobby Orr, a man who knows a thing or two about hockey, undoubtedly had future troubles in mind when he made these remarks:

“I don’t think there’s any question they’re (modern player) bigger and faster today, that’s why it comes back to the [need for] rule changes. We’ve got to slow them down, we’ve got to make them use their skill. That four feet [added] inside the blue line: Do you know how much room that is in hockey? They’re loading the one side and one-timing. Wow, and the coach is saying “block the shot.” Ouch. We have more penalties, more powerplays, more boom-booms from the blue line. What we’ve got to do in our game: stop the high blind-side hits, hitting from behind, and [have] automatic icing. They probably won’t listen to me.”

After the 04-05 lockout, the NHL enacted rule-changes to increase scoring.  Suddenly, with the killer CTE looking for new prey, the league is changing rules to decrease head injuries.  Amazing how brain damage, and the threat of multi-million dollar settlements, can change priorities.

We soon could be faced with a situation where the “part of the game” argument is no longer sufficient when discussing violence in hockey.  No one would accuse Bobby Orr and Steve Yzerman of being anti-purists, and both men are ringing the warning bell.  As of today, the NHL is not concussed to the point where they cannot hear it.

Some steps to quench CTE’s thirst for hockey-brains have been taken.  More, undoubtedly, will be needed.