In today’s News & Notes, Guy Boucher has been fired by the Ottawa Senators, Kendall Coyne Schofield has been hired by the NHL Network as a studio analyst and the NHL has announced their three stars for the month of February.

The Senators have fired Boucher as their head coach and have replaced him with Marc Crawford who will take over in an interim capacity.

Things haven’t gone well for the Senators over the last two seasons and though it’s very hard to put the blame on Boucher given what’s taken place in Ottawa, this could set the tone for a completely new-look franchise after this season. Crawford could end up being the full-time coach but the Senators will likely do their best to find the person they deem best suited for the role. 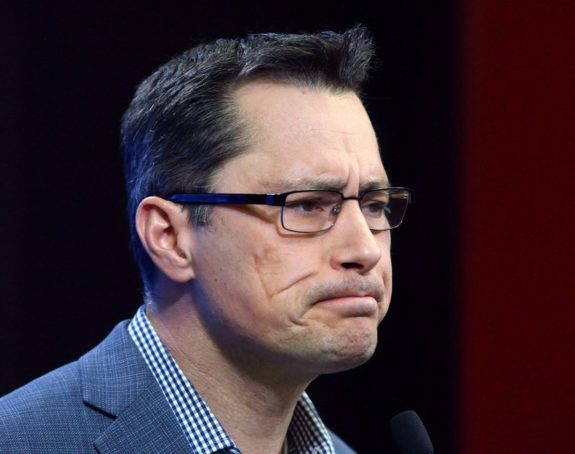 “I want to thank Guy for his three years of service,” Senators general manager Pierre Dorion said. “He is a good person and has been an excellent representative of the Senators. At this point, however, we need a different set of coaching and leadership skills to guide our team through this rebuild. In the interim, Marc will bring a different perspective along with a wealth of head coaching experience.”

Dorion would continue by saying that the status quo wasn’t okay in Ottawa.

“I told them that recently our play wasn’t acceptable, and that moving forward I didn’t want any excuses,” Dorion said.

“I think we’re fielding a team from now to the end of the year that can win games. And we want to see this team win games, develop, grow, have a great culture, play for each other, play for the coaching staff, and more importantly play for our fans. And we saw that against Calgary a few days ago (a 2-1 loss Sunday). I don’t think we saw that last night. And at a certain point in time, we felt that we had to make this decision today. And it’s a decision that tries to set a foundation for this organization and this rebuild to thrive as earliest as possible.”

The NHL Network has hired Coyne Schofield to be a studio analyst. The Olympic gold medalist will make her debut March 4 and will provide first-hand insight on the game as she’s played it at the highest level in the NWHL as well as internationally, representing the United States at the Olympics and the World Championships

The entire hockey world was blown away by Coyne Schofield when she dazzled at the NHL All-Star Weekend festivities, participating in the fastest skater competition and further breaking the barrier that stands between women in hockey being considered equal as players to the men.

Coyne Schofield made her broadcast debut on NBCSN just a little while after that impressive showing and would work pre-game coverage on “NHL Live” before covering the game in the booth alongside John Forslund and Eddie Olczyk and “Inside the Glass” with Pierre McGuire.

NHL 3 Stars of the Month

Vladimir Tarasenko has been named the NHL’s third star of the month. The Blue’s right winger scored an impressive 10 goals and 22 points in 14 games and helped the Blues to a very impressive 12-1-1 record in the month of February. The Blues appeared destined to miss the postseason in the not-so-distant past but the team has found their footing and have looked very impressive as of late. Much of that success has been helped by Tarasenko. 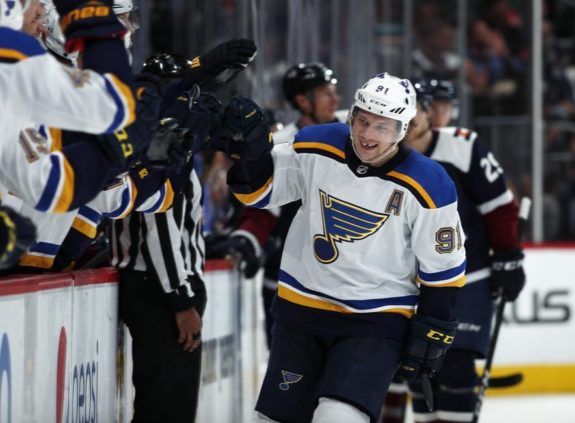 The 27-year old forward is second on the Blues with 27 goals and 54 points in 62 games but has scored 16 goals and 32 points in his last 25 games alone since Jan 3. While there was once thought that he could be moved at the trade deadline, his name was never so much as whispered as the deadline came and went given the Blues’ recent streak.

Patrick Kane has been named the NHL’s second star of the month. The Blackhawks’ right winger would score 11 goals and 23 points in just 13 points and would be a big part of his team’s 9-4 record in February. That record is important as well given the fact that the Blackhawks are now slowly creeping into the postseason race. 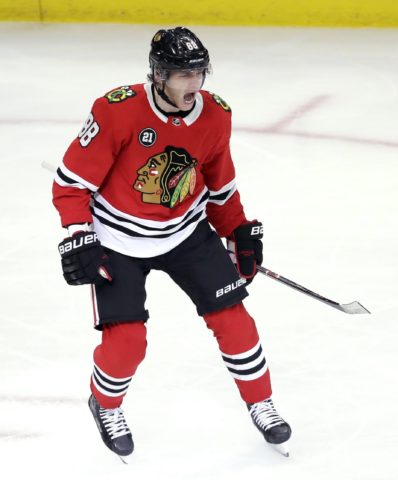 Nikita Kucherov has been named the NHL’s first star of the month. The veteran forward has been scoring at a torrid pace over the last few seasons and this year is no exception. He’d lead the NHL in assists (17) and points (25) in 15 games in February, helping the Lightning to a very impressive 12-1-2 record. The team’s only loss came on the final day of the month against the Boston Bruins who are on a similarly impressive point streak (one that they are still on heading into March). 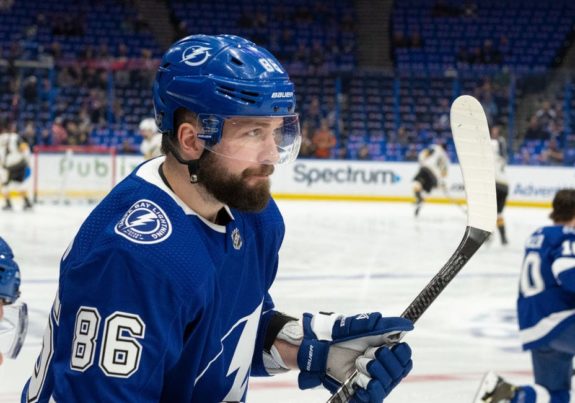 TAMPA, FL – FEBRUARY 5: Nikita Kucherov #86 of the Tampa Bay Lightning before the game against the Vegas Golden Knights at Amalie Arena on February 5, 2019 in Tampa, Florida. (Photo by Scott Audette/NHLI via Getty Images)