One thing remains to be unseen and that is the official names of the newly minted divisions. The current working titles of Divisions A, B, C, & D aren’t exactly appealing and the league is planning on giving them actual names. However, nothing official has come down the line as of yet. Will they go with a ho-hum geographical name or look to the past for the answers?

I have some ideas that maybe Gary Bettman should take a gander at for the new NHL realignment.

If the NHL wants to continue to use geographical terms to name their divisions, it might be more confusing than ever.

For example, take a look at Division C. Division C has the teams from the Northeast Division, Detroit, and the two Florida teams. You really can’t call it the “Northeast Division” if Tampa Bay and Florida are well over a thousand miles away from the rest of it’s new division rivals. Detroit isn’t exactly in the Northeast, either. They are in the Midwest and the naming just wouldn’t make much sense.

The Colorado Avalanche and Dallas Stars aren’t really in the Central. You could argue that Dallas is, but I consider them more Southern than anything. However, Dallas was part of the Pacific Division when they are closer to the Atlantic Ocean, so, anything could really happen with this one.

Bringing Back the Old Favorites

I’ve been an advocate for this one for awhile now, the NHL should bring back the Adams, Norris, Patrick, and Smythe Division names.

I really liked these names because it was something different that no other major North American league had done. All the divisions had been named East, West, South, and so on, it got old quick. The NHL named their divisions after four men who made the league what it is.

Division D consisting of the teams in the Atlantic Division, Carolina Hurricanes, Columbus Blue Jackets, and Washington Capitals become the Patrick Division. The old Patrick Division is back from the early 80s now that the Capitals are in the same division and it just makes sense to name the division, the Patrick.

I would like to take it one step further and name each conference the Campbell and the Prince of Wales, but one step at a time.

How about a twist one the old classics and renaming the divisions after other famous hockey figures. No offense to Charles Francis Adams, James E. Norris, Lester Patrick, and Conn Smythe, they are true legends of the sport, but maybe you try to add some more life in the division names.

Division A, since the Edmonton Oilers are in it, gets renamed the Gretzky Division. Wayne Gretzky already has his number retired league wide and is the best player in the history of the sport, maybe a division name is another proper tribute to the “Great One”.

Division B, as I mentioned earlier, doesn’t have a lot of history outside of the Chicago Blackhawks and the St. Louis Blues. I was torn between choosing Stan Mikita and Bobby Hull, the two greatest Chicago Blackhawks, but in the end I chose Stan Mikita. Hull may have better stats, but Hull’s violent past involving his ex-wife probably wouldn’t look too good for the league. So, Hull’s former teammate Mikita and his great history with the Blackhawks gets the honor bestowed upon him.

Division C has quite a bit of teams with a deep, rich history. The Boston Bruins, Detroit Red Wings, Montreal Canadiens, and Toronto Maple Leafs are four of the Original Six and could have anyone within it’s history be honored with a division name.

However, the Montreal Canadiens edge out all of them. The Canadiens ARE hockey. They have won the most Stanley Cups in NHL history, have pumped out Hall of Famer after Hall of Famer, and a rabid fanbase, but which Canadien gets the honor? There are a lot of great Canadiens to choose from but Maurice Richard gets the nod, and so Division C becomes the Richard Division. 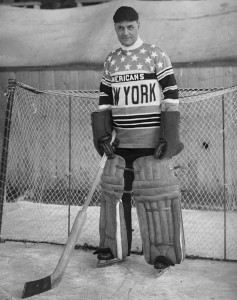 Now Division D I decided to name after a former owner and not a former player. The New York Rangers have the most history within the division and, to honor the man who brought the Rangers into the league, the division is named for “Tex” Rickard. Now this could get confusing with the Richard Division playing alongside the Rickard Divsion, so, I developed a plan B.

What do you think the new division’s should be called? Comment below or send me a Tweet, @MarkWGraham