In today’s rumor rundown, there are updates involving the Toronto Maple Leafs, there is news on the who the Winnipeg Jets might be targeting at center before the trade deadline and it sounds like a decision will be coming this week on pending free agents Mark Stone, Matt Duchene and Ryan Dzingel out of Ottawa.

The Latest on the Maple Leafs

There is plenty of news and speculation when it comes to the Toronto Maple Leafs. The biggest surrounds defenseman Jake Gardiner and a couple of the team’s young prospects.

While on the Fan 590, Nick Kypreos said, “I believe if they can get in around $5 million, Jake has a chance to get an extension here.” It seems unlikely Gardiner would take $5 million per season knowing that on the open market he could get more, but on a shorter term, perhaps he says yes knowing that he’ll be on a competitive team and still have a chance to cash in after those two or three years are over. A deal might be structured in a similar way to what the Leafs did with Auston Matthews.

Maple Leafs Won’t Use Top Prospects to Snag a Rental

Elliotte Friedman on Sportsnet Headlines said the Toronto Maple Leafs have been linked to Carolina Hurricanes forward Micheal Ferland and are looking for that type of player but that the Hurricanes may not be looking to move him now. So too, the Maple Leafs are not willing to trade their top two prospects or a future first-round pick to acquire such a player.

“They have indicated that, for a rental, they are not interested in dealing either of their top two defence prospects, [Rasmus] Sandin or [Timothy] Liljegren or another first-round pick,” Friedman said. “They’ve already dealt one for Jake Muzzin, who they have for another year.”

Decision Coming in Ottawa This Week

During last night’s “Headlines” segment of Hockey Night in Canada, Sportsnet insider Elliotte Friedman reported the Senators would have a decision made regarding Mark Stone, Matt Duchene, and Ryan Dzingel by “about 10 days out before the deadline hits” on February 25th. That means, the team will either be announcing extension or secure deals with other teams by the end of the week. 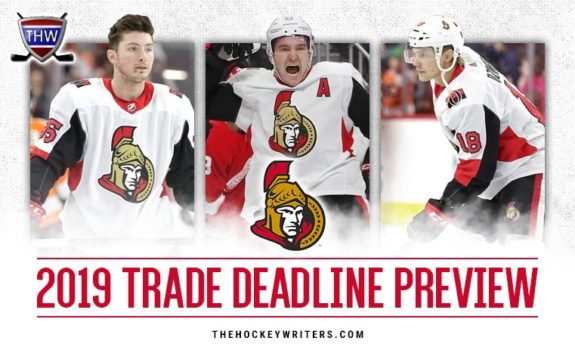 Chris Johnston suggested that all three deals could revolve around Duchene. It has been noted that Duchene likes Ottawa and Johnston suggested there might even be a possibility of him being traded and then signing back on with the Senators in the postseason. If he leaves, however, the offer of $64 million over eight years won’t be possible and these types of returns are rare.

Rory Boylen of Sportsnet took a look at the options likely available to the Winnipeg Jets at center heading into the trade deadline. He suggested Derick Brassard, Brayden Schenn, Matt Duchene or Kevin Hayes as the most likely targets.

When it comes to Brassard, it helps that the Golden Knights are already retaining $2 million of Brassard’s cap hit and that he could fit on the Jets second line, moving Bryan Little to the third line. Brayden Schenn may be a trickier get because the Blues are back in the playoff race and may not want to move him. Duchene will cost a lot as a rental.

Kevin Hayes may be the best option and Nick Kypreos said that the Jets and Nashville Predators have been linked to Hayes in trade talks.

Listen to the Latest Edition of the Hockey Writers Podcast

What’s going on with Mitch Marner in Toronto now that Matthews is signed? Also, what moves are the Edmonton Oilers about to make?