The challenge a team brimming with young talent faces in managing its payroll structure was one topic Babcock particularly enjoyed sidestepping shortly after Toronto and forward William Nylander ended a lengthy contract dispute this month.

“Well, I think you’ve got to talk to a manager about that,” said Babcock, referring to general manager Kyle Dubas.” I just coach the players.”

Babcock was so pleased with his response, he winked and added: “I bailed on that one, eh?” 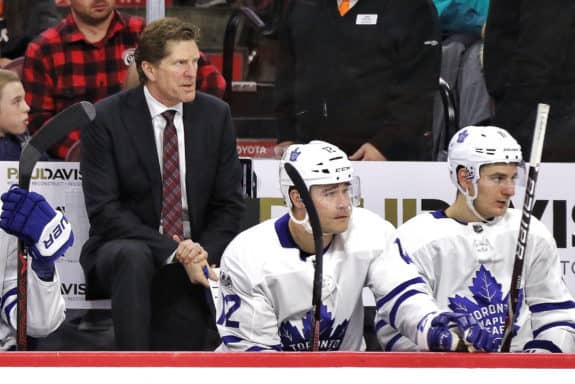 Funny, sure, but it doesn’t make the issue go away.

Nylander signing a six-year, $41.4 million contract was merely a prelude to what will be a busy 2019 for Dubas, who will have to be creative in keeping the young core of his team intact within the constraints of the NHL’s projected $83 million salary cap. With $55 million in salary already on the books for next season, the Leafs have little wiggle room with 2016 first-round draft pick Auston Matthews and forward Mitchell Marner, the team’s current leading scorer, both completing the final years of their contracts.

Matthews, who followed up his 40-goal rookie season with 34 last year, is expected to command a contract similar to the eight-year, $100 million deal Edmonton Oilers captain Connor McDavid signed in the summer of 2017. And Marner, the fourth pick in the 2015 draft, likely won’t be far behind because he is on pace to top the career highs of 22 goals and 69 points he had last season.

“I don’t think any of our group and our whole organization should forgo the enjoyment of the season because we have good players that need contracts,” he said. “I think it’s a fortunate position that we’re in.”

Dubas is not the only one in this fix.

In Winnipeg, forwards Patrik Laine, Kyle Connor and defenceman Jacob Trouba are eligible to become restricted free agents. With an eye on the future, the Jets were unable to retain Paul Stastny, who elected to sign a better offer with Vegas last summer.

In Buffalo, newly acquired forward Jeff Skinner’s asking price goes up with each goal he scores. Skinner has 25 already to match last season’s total and ranks second in the NHL behind only Washington’s Alexander Ovechkin. Skinner will be an unrestricted free agent this summer if the Sabres can’t re-sign him. 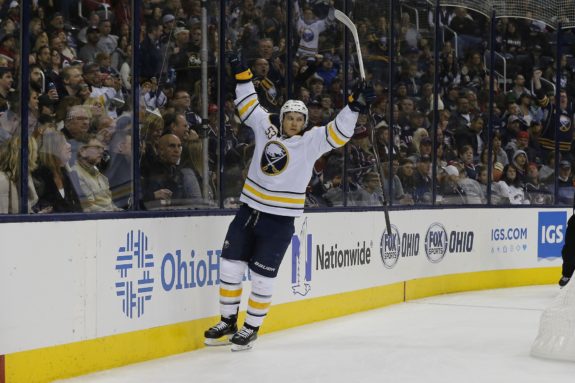 Buffalo will have money to spend, but has to be cautious with centre Jack Eichel in the first year of his eight-year, $80 million contract. And the team will also have to keep open a large portion of cap space once No. 1 overall pick Rasmus Dahlin’s entry-level contract expires in three years.

The question becomes how teams retain their young stars while keeping enough money aside to fill the remainder of their roster.

“The philosophy is simple, and you’re seeing it around the league. The only way you can keep a lot of your top-end players is if you have other players coming up through the system,” Sabres GM Jason Botterill said, placing an emphasis on scouting and player development.

Botterill saw that firsthand working in Pittsburgh, where the Penguins complemented their core of Sidney Crosby, Evgeni Malkin and Kris Letang by filtering in younger players on cheaper entry-level contracts.

Still, it can get complicated once a team’s high-priced core starts aging.

The troubles are apparent in Chicago, which won three Stanley Cups from 2010-15 with Patrick Kane and Jonathan Toews but is now a team in transition with some big contracts in place. It’s no different in Los Angeles, where the Kings have been eliminated in the first round of the playoffs and missed the post-season three times since 2014, when they won their second Cup in three years.

“It’s not a perfect business,” Detroit Red Wings GM Ken Holland said. “You make decisions and you may wake up two years later with different information, but it’s too late and you have to manage around that decision.”

CHICAGO, IL – JUNE 24: General manager Ken Holland of the Detroit Red Wings talks with his staff during the 2017 NHL Draft at United Center on June 24, 2017 in Chicago, Illinois. (Photo by Dave Sandford/NHLI via Getty Images)

What’s changed over the past decade? Teams are spending more money on retaining players over adding them in free agency.

It’s a philosophy that places an emphasis on evaluating potential at a younger age and determining whether they can perform to the value of their contract. Otherwise, a team could be stuck with a player with a high-priced guaranteed contract that handcuffs future decisions.

“I don’t think there’s any easier answer to it. I mean, you just have to make the right decisions on the player,” Nashville Predators general manager David Poile said. “One bad contract and it knocks everything out of line.”

Poile has done an adept job in maintaining a competitor on a roster that features six players taking up a combined $40.25 million in salary cap space this year.

“You’ve got to be willing to say, ‘You know what, the guy that doesn’t quite fit in that core, we may need to make a decision that you have to move him,'” Nill said. “I know sometimes fans are going to say, ‘Whoa, why are they doing that?’ You’ve got no choice.”

The Maple Leafs are among the exceptions in trying to build through the draft and free agency, after signing John Tavares to a seven-year, $77 million contract last summer.

After missing the playoffs during each of his eight seasons in Carolina, Skinner is enjoying the buzz the Sabres have created in Buffalo, a year after finishing last for the third time in five years.

“I haven’t really been here before and realized how much they love the Sabres. It’s been fun,” said Skinner, who waived his no-trade clause to approve the Hurricanes dealing him to Buffalo for prospect forward Cliff Pu and three draft picks in August. “Hopefully, we can keep giving them something to be proud of.”

Skinner was reminded of how those same fans want him to stay in Buffalo beyond this season.

GAME OF THE WEEK

Sidney Crosby and the Pittsburgh Penguins travel to face Alex Ovechkin and the Capitals on Wednesday night.