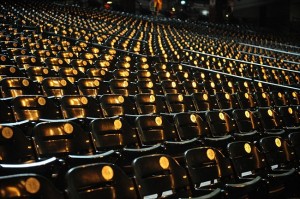 After the lockout ended, most teams were looking into ways to make it up to the fans. NHL ticket prices however didn’t get too much attention, with costs remaining status quo and some teams even increasing costs for the shortened season.

While every Western Conference team except Colorado (Tickethorse) uses Ticketmaster as their official ticket supplier, secondary market ticket resellers such as StubHub (owned by Ebay) and Razorgator (based in California) are often a competitive if not cheaper alternative for fans.

Below is a chart showing every Western Conference team and the price of the cheapest ticket available for one person, both from Ticketmaster and also a secondary market reseller. While these prices change daily, if not hourly, consistency has been attempted by keeping the opponents to either Columbus, Phoenix or Anaheim for each team, depending on the remaining schedule.

This list does not include standing room or specialized VIP tickets. The lowest priced ticket available for the listed game using these websites is shown in bold and these were generally electronic or instant printable tickets, thus eliminating any delivery charges from companies such as FedEx.

The cheapest tickets available were for the Anaheim vs Columbus game at just over $16, followed closely by Phoenix and Colorado at just under $19. The most expensive single tickets on this day belonged to the Chicago Blackhawks at close to $70, followed by the Calgary Flames at $68.75 and the Vancouver Canucks who managed to keep costs down slightly by adding “Last Seat In The House Single” tickets, reduced to $66.

While the Canadian teams and old-timers such as Chicago and Detroit generally have little trouble filling their respective rinks, an interesting comparison is the price differences between the cheapest and most expensive seats for each franchise.

The table below shows the lowest to highest prices for a game ticket, as shown via the cost range area of the Ticketmaster online website. These prices are all subject to change with the lowest often including standing room and the highest being row 1, glass seating.

While the Dallas Stars have official tickets starting at just $11, surprisingly the Detroit Red Wings also have seats starting at just $16 with first row action costing just over $210, close to $150 cheaper then fellow original six team Chicago. The cheapest row 1 seating went to the Columbus Blue Jackets at $212 while the most expensive ice-level seating went to the LA Kings at $477, similar to the price of a first row ticket (not court-side) at an LA Lakers game.

The graphic below provided by Razorgator, shows the average home and away secondary market prices of all 30 NHL teams from the beginning of the current season.

As is to be expected, the two teams with the most expensive average secondary market ticket prices are the Toronto Maple Leafs and the Winnipeg Jets.

The Jets, having just re-entered the league last season, have a huge demand for tickets having been without hockey for many years. The fans have embraced the return of the Jets and whether or not this trend will continue in the future may depend on the on-ice performance of the team. The demand and price of tickets however shows that the NHL was successful in moving the team from Atlanta, which averaged just 13,538 fans in the teams final 2 years, quite low for a city of 5.3 million people in the metro area.

The Leafs with their huge fan-base will always be regarded as one of the biggest draw-cards, despite not reaching the NHL playoffs since 2004. The sheer number of hockey fans in the greater Toronto area will almost guarantee full attendance for a long time to come though it will be interesting to see how a second team in Southern Ontario may affect the Leafs’ attendance, especially if they were to begin outperforming the original six team.

The cost of one front row seat on Ticketmaster, behind the goal at the United Center for the Chicago Blackhawks vs LA Kings game on March 25th – $457

Two flights to Los Angeles, departing from Seattle $120pp (Boltbus Vancouver to Seattle $14pp) on March 22nd, 1 night in a private hostel room near Hollywood $30, 2 cheapest tickets available for the 1pm LA Kings vs Vancouver Canucks game at the Staples Center on March 23rd $90, return flight LAX to Vancouver after the game on March 23rd $150pp – $688

While the above scenarios may seem exaggerated, for a neutral hockey fan it certainly pays to be in a city such as Anaheim or Phoenix  It is fairly obvious that demand for tickets increases prices but in some hockey markets the casual fan is being priced out, often expecting to pay over $100 a ticket.

As getting season tickets for some NHL teams are near impossible with huge waiting lists, the only real solution to get casual fans involved again, besides building bigger limited view arenas, may be through NHL relocation, as has already proven successful with the Winnipeg move from Atlanta. If three struggling NHL teams were to move to Seattle, Southern Ontario and Quebec, this would allow more fans in Vancouver, Toronto and Quebec to attend games, raising the revenue of the NHL and growing the business of hockey.

As well turning away some fans, the high ticket prices of some teams may add extra pressure to perform, as when a fan pays a high price for a ticket, they will expect a good quality game with a win for their team, with the pitchforks likely drawn at an expensive, boring 1-0 loss.