There’s an old saying that seeing is believing. For the NHL, fans aren’t seeing what the league wants them to believe.

The league puts off the false facade that the game has never been better, and that they couldn’t be happier with the product. Look deeper into it, and it’s easy to see that Commissioner Gary Bettman and the NHL are lying through their teeth and don’t really believe the nonsense being spewed.

The league is seeing pregame shows for the NBA outdraw them in the ratings yet they say the popularity of the game is on the rise. And to say that doesn’t bother them would be a boldface lie. The league stifled watch parties because it took away from people watching at home.

Newsflash NHL, the people in a local market with a dog in the fight shouldn’t be your concern when getting people to watch. They obviously care about the team or they wouldn’t go to the arena to watch a road game with thousands of other fans. Besides, the amount that attend aren’t nearly enough to impact ratings. Instead, the league should focus on getting fans with no team to watch.

In Canada, where the game is immensely popular, ratings are down 60% percent. And while many will point to the fact that no Canadian team made the playoffs as the reason, there are still many Canadian-born players left that would normally lead to viewers. But the fact that the NHL promotes a game that aims to limit the impact its stars turns a lot of people off. Why would people tune into a game where players like Sidney Crosby and Logan Couture are getting held and interfered with nearly every shift? 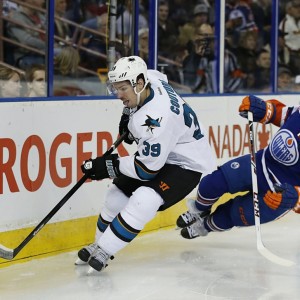 Fans watch to see fast-paced action where players can showcase their true ability. Tuning in to see defenseman grabbing and hooking a player in the offensive zone with no repercussion is not what people want to see. In fact, it’s the complete opposite.

The game should be aimed at allowing star players to showcase their abilities, but instead Bettman and the rest of the executives want to say that the game is doing great. Yea, so great that ratings for regular season games were beat by reruns of television shows that aren’t even relevant anymore. What about the fact that the league’s championship round has only had one of the first three games shown on network television.

Game 2 was on NBCSN, a channel not everyone gets, to make room for a new episode of American Ninja Warriors. That makes sense from an NBC perspective as ANW is likely to get higher ratings than the Stanley Cup Final — Game 1 on NBC pulled a 2.3 with 4.1 million viewers —  but that’s not NBC’s fault. But why was Game 3 on NBCSN on Saturday night? NBC aired a repeat episode of Dateline at 8pm on Saturday. You mean to say that Game 3 — which had a 1.9 with 3.3 million viewers — couldn’t have been on the main peacock network that night? I call shenanigans on the NHL for that. Again, it’s not NBC’s fault, it’s the league’s and their terrible television deal.

Compare that to the aforementioned NBA where every game in the NBA Finals is airing on ABC. Not a single game is going to broadcast on cable, which will undoubtedly lead to higher ratings for the association. While a lot of it has to do with the NBA being more popular than the NHL, the fact that the NHL continues to fall in popularity is more of a sign of management than it is of the overall sport itself.

The NBA promotes its superstars and highlights them on the court with rules that are in favor of them. The NHL is on the other end of the spectrum. Not only does the league have rules that allow the hampering of stars, as mentioned before, but they don’t even seem to want to promote the next wave of superstars.

The next great player in the league – Edmonton Oliers forward Connor McDavid – was shown on national television in the United States a whopping zero times. Hell, the only time he was scheduled to appear, a March 1 game against Jack Eichel and the Buffalo Sabres, the game was replaced to show a matchup between the Washington Capitals and Pittsburgh Penguins. That’s right, instead of showing a matchup between two new stars — McDavid scored twice in a 2-1 Oilers win — that will be linked together for the next 15 years, the league decided to show a matchup that fans have seen for years and are getting tired of. Great business practice.

One can only imagine how the league’s next television rights negotiations will go if the trend continues. The NHL will likely get laughed at for what they want, and bidders will simply point to the fact that Seinfeld reruns get higher ratings than the league. And when it all comes down to it, the Bettman and the rest of the executives running the league have only themselves to blame.