Who is in Play? 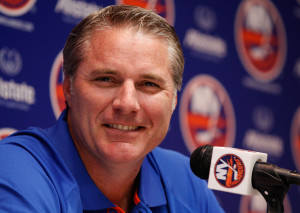 The New York Islanders have a few good pieces I expect to be on the trade market this offseason. By themselves in a trade none of these players would garner more than a mid-round draft pick or a secondary prospect. But if you put a couple of these players together along with a Griffin Reinhart or a Ryan Pulock, you’re now talking trade. Who are these players that I am referring to on the Islanders roster? Why, none other than Michael Grabner, Brian Strait, Thomas Hickey and Matt Donovan.

The Gremlin is Available

Due to injuries and inconsistency in his game, Grabner only played 34 games last season. He’s only 27 and has shown that he has a lot of speed, skill and is a solid penalty killer. His talent on the ice also makes him a breakaway waiting to happen, especially when on said penalty kill. Keep in mind that it was not that long ago that Grabner scored 34 Goals in a season. Grabner is on the last year of his deal, but only counts for $3 Million against the Salary Cap next season. Because he is only a year away from being an unrestricted free agent that does lessen his trade value.

D-Men Chips on the Table

To say the Islanders are deep on defense in the organization is an understatement. The Isles have locked up their top three defenseman in Johnny Boychuk, Nick Leddy and Travis Hamonic for the long term. In addition, they have talented youngster and former 1st-round pick Calvin de Haan in the system. Lubomir Visnovsky is a UFA and will likely depart. The team also has Reinhart, Pulock and Scott Mayfield all banging on the door, and appear ready for the NHL. It’s also a possibility that the Isles go out and add a proven Top-4 defenseman this offseason.

So, where does that leave Strait, Hickey and Donovan? Hickey and Donovan are RFAs this summer, and will likely be favorable salary cap players. Strait, on the other hand, is signed for next season at a measly 775K cap hit, and becomes an UFA after next season. With all their top young defenseman coming down the pipeline, it’s possible at least two of these three players will be traded away this summer.

As I stated at the top I think general manager Garth Snow can get the most for these players by putting them in a package, along with another valuable piece. If that happens, it could get interesting to see what player(s) come back to Brooklyn. I firmly believe Snow does not get his due as a General Manager.