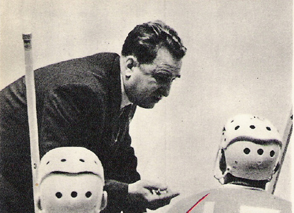 When I first heard about ESPN’s latest 30 for 30 documentary, “Of Miracles and Men,” I counted down the days until I would get to relive the Miracle on Ice. For me, it’s the single-greatest American sports story there is.

I had already seen the HBO documentary “Do You Believe In Miracles?” and the movie “Miracle” starring Kurt Russell as United States coach Herb Brooks. So, I knew the story form beginning to end. What I was wondering was how this new documentary was going to offer something new that the documentary and movie before it didn’t offer.

Well, “Of Miracles and Men” showed a completely different view regarding that historical game between the United States and Soviet Union: the perspective of the players who played for the Soviet Union.

Director Jonathan Hock explains his vision for this documentary:

As Hock explains in his vision, the only reason we talk about the Soviet Union hockey team is because they lost to the Americans. Before and even after the 1980 Olympics, they dominated the sport of hockey, winning gold medals in every Olympics from 1964-1976 and winning 12 gold medals at the World Championships from 1963-1979.

Not only do you hear Al Michael’s famous “Do you believe in Miracles? Yes!” call, but you hear the Soviet Union radio announcer during the 1980 game, which signs off the air by simply stating “With that we are finishing our commentary.”

When I think of Soviet Union hockey, I think of robotic players with no emotions playing a game to win rather than for fun. However, it was Tarasov’s love of the game and big-hearted nature that helped the Soviet Union players fall in love with the sport.

“Of Miracles and Men” shows the light-heartedness of Tarasov and what made him so loved by all of his players. The documentary does a fantastic job of humanizing the players I thought of as robots and void of emotion. They loved playing the game of hockey just as much as any kid in American loved playing it.

It was only when Viktor Tikhonov became the coach did the players start to sour on the sport.

The documentary follows former Detroit Red Wing Stanley Cup winner and member of the 1980 Soviet Union team Slava Fetisov, as he visits the arena in Lake Placid on a trip down memory lane with his daughter, Anastasia Fetisov.

He, along with several other former teammates, including Boris Mikhailov, Vladislav Tretiak and Alexei Kasatonov recount what it was like to play for the Soviet Union during the 1970s and 80s.

One of my favorite parts of the documentary is the aftermath of the loss in the 1980 Olympics. Fetisov wanted to play in the NHL and was being recruited by New Jersey Devils general manager Lou Lamoriello. However, the Soviet Union would not let him leave, as he was still under contract with the Soviet Army.

After a number of broken promises, being barred from the team, being re-instated on the team and winning gold in the World Championships and Olympics, Fetisov was allowed to play in the NHL by the Soviet Union.

Fetisov broke the barrier of Soviet Union players being permitted to play in the NHL, and it ushered in a new wave of players from the Soviet Union, and eventually, Russia in the early 1990s.

“Of Miracles and Men” was one of the best 30 for 30 documentaries I have seen. It shed new light on a subject that has been analyzed over and over for the past 35 years. All of the stories, all of the emotion are coming from the “bad guys,” but after watching the documentary, they don’t seem so bad at all.

I’d highly recommend this documentary, not only to hockey fans, but to all sports fans. It will give you a greater appreciation and understanding for one of the greatest American sports stories in history.