When Anaheim Ducks’ General Manager Bob Murray fired head coach Randy Carlyle last November he knew the medicinal fix that his offensively talented roster, which was already on course to miss the playoffs for the second time in three seasons, needed. He decided to call up the NHL’s now proven Doctor of offensive depth in Bruce Boudreau. Boudreau maximized both the top end offensive talent and most importantly the offensive depth of his rosters in Washington and he has gone on to produce just about identical results with another talented roster this time in Anaheim.

The evidence of Bruce Boudreau’s success with this offense is plain for everyone to see. Anaheim didn’t make any major additions to their roster in terms of offensive player this past offseason. Still, Boudreau has generated more production out of the team’s top scorers and he has found a level of offensive depth that few realized this team had.

Here’s a look at the difference in offensive numbers over the past two seasons.

In 2011-12 the Ducks scored 201 goals ranking them among the NHL’s bottom feeders in terms of offensive production. Corey Perry (37 goals) and Bobby Ryan (31 goals) both ranked among the top 25 goal-scorers, while Teemu Selanne (26 goals) ranked in the top 50. However, offensive depth was a serious cause of concern.

The turnaround so far through the shortened 2013 NHL season has been remarkable. Through 40 goals Bruce Boudreau has this team rolling with 117 goals on the scoreboard already. That projects out to around 40 more goals in an 82-game season compared with 2011-12.

The top three goal-scorers on Boudreau’s team are only accountable for 32% of the team’s goals in 2013 so far. 10 players on the team have scored more than 5% of the goals and it seems like a different depth forward steps up to carry a line for Anaheim each month. Here’s the table for the top 10 scorers for the Ducks this season.

Getzlaf and Perry still lead the team, while Andrew Cogliano is also enjoying a better season after tallying only 13 goals in 82 games last year. Getzlaf and Perry are each responsible for just 11% of the team’s goals, while in 2011-12 three players were each accountable for 13% of Anaheim’s goals or more.

Bruce Boudreau has very deliberately always aimed for balance in his forward group and it is clearly paying off. Even with Getzlaf recently sidelined with injury Boudreau has still aimed for balance. Before the top center’s return to the line-up on Wednesday against Colorado Matthew Lombardi was centering the top line with Perry and Ryan. Selanne was paired with youngsters Palmieri and Peter Holland, while Saku Koivu and Andrew Cogliano formed a third line along with Daniel Winnik. Even the team’s recent fourth line has some decent offensive potential with a pair of wingers with big goals this season in Matt Beleskey and Emerson Etem.

The influence of Bruce Boudreau has been a big part of the success those players have enjoyed. The 58-year old has a way of igniting offense in players, especially younger players. Boudreau has shown that he is capable of setting up an offensive system that maximizes the offensive potential of his team. He isn’t afraid to use less established attacking threats on his top lines and more often than not it pays off.

This isn’t Boudreau’s first time generating that kind of offensive success. He coached the Washington Capitals for four years from November 22, 2007 until November 28, 2011. During that span he developed his ability to scratch offensive depth out of his line-up and played a crucial role in developing a group of young scorers.

Since the 2004-05 lockout the Capitals have regularly been a pretty good offensive team led by superstar Alexander Ovechkin and the statistics clearly reflect that.

During his time in the nation’s capital Boudreau had the opportunity to work with a dominant offensive core led by Ovechkin, Nicklas Backstrom, Alexander Semin and Mike Green. He had the opportunity to work with some strong veteran depth players including Michael Nylander, Mike Knuble and Sergei Fedorov. However, he also played a critical role in maximizing the potential of developing forwards Tomas Fleischmann, Eric Fehr, Brooks Laich, Mathieu Perreault and Marcus Johansson.

The table below demonstrates the offensive depth of Washington in terms of number of 10+ goal scorers and percentage of goals scored by the top three goal scorers each season over the past seven years. The years where Bruce Boudreau coached are in bold.

*Boudreau took over head coaching duties on November 22 during the 2007-08 season.

** Boudreau was relieved of his head coaching duties on November 28 during the 2011-12 season.

During his tenure the Capitals became less and less reliant upon their top three scorers in terms of the percentage of the team’s goals they scored. Incidentally, the percentage is back up to 44% through the shortened 2013 season under Adam Oates so far. He also always found a way to get more players involved offensively and that shows in the number of 10+ goal-scorers column.

There are those that will argue that Bruce Boudreau has been privileged in terms of the personnel that he has had the opportunity to work with. Boudreau had the opportunity to work with Ovechkin, Backstrom, Semin and Green in Washington and in Anaheim he is working with Getzlaf, Perry, Ryan and Selanne. That’s hardly a downgrade and any team with either of quartets should be among the leaders in the league offensively. 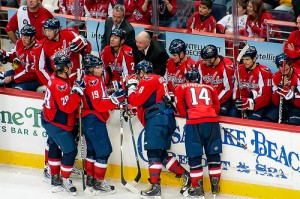 However, while most coaches at NHL level have the basic ability to run a decent offensive team when they have offensive stars on their roster. Boudreau has shown that he has the ability to build a more sustainable offense. An offense that utilizes its maximum potential both in terms of its stars and its depth players.

Ultimately Boudreau still has plenty to prove as an NHL head coach. He won just two playoff series in four appearances during his time in Washington. Fans of the Capitals got frustrated with a system that didn’t emphasize defense enough and Boudreau wasn’t able to transition successfully to a more balanced system. Perhaps he has found better balance with the Ducks producing the seventh ranked offense and eighth ranked defense. Anaheim started the season as a bit of a dark horse pick, but after a fantastic regular season display they will start the 2013 playoffs as one of favorites in the Western conference. Bruce Boudreau needs to be in charge of a team that makes a serious playoff run.

It won’t be easy to do that with this Anaheim team. They have slipped up just a little of late going 5-6-1 in their past 12 games. The blue line is heavily reliant upon the top pairing of Francois Beauchemin and Sheldon Souray [see also: Sheldon Souray’s Performance Plus]. Both players are big, physical and have heavy shots. Still, their skating game is a little suspect and intuitively it feels like a difficult pair to trust as the top shutdown duo.

Meanwhile, Boudreau got very used to goaltending difficulties in Washington and didn’t always handle them in the most effective way [see also: Viktor Fasth Strong Play ‘Curse In Disguise’ For Anaheim Ducks?] Viktor Fasth and Jonas Hiller have split duties pretty close to 50/50 so far this season. Hiller was the #1 heading into the season, but former Swedish Elite League star Fasth has stepped up and had the better season so far. Presumably Fasth would start the first game of the playoffs if they started tomorrow. However, that’s not an easy choice and Boudreau can ill-afford to mix around his goaltenders again in the postseason.

Until then the 58-year old deserves a lot of credit for the fantastic job that he has done with a franchise that had missed the playoffs in two of the previous three seasons.