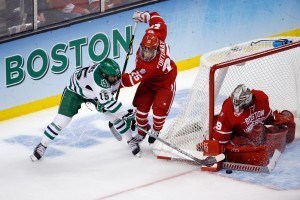 Rumored to have been deciding between multiple teams including the New York Rangers, Edmonton Oilers, Vancouver Canucks and even the Calgary Flames, O’Connor joins a young, talented and emerging Senators team which is now overcrowded in goal.

Since the Rangers have Henrik Lundqvist and Cam Talbot in goal, the Canucks possess Ryan Miller, Eddie Lack, Jacob Markstrom and Thatcher Demko and the Calgary Flames retain Jonas Hiller and Jon Gillies, the decision likely came easy for O’Connor. Based on the starting goaltenders and general situations of these teams, it is quite easy to see why O’Connor decided otherwise.

On the other hand, the Oilers have little quality in net.

O’Connor’s choice to sign with the Senators is an interesting one, especially so considering the teams current goaltending situation. 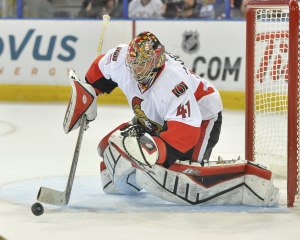 Ottawa currently has Craig Anderson under contract until 2017-18. Over the next three seasons, Anderson’s contract carries an average cap hit of $4.2 Million dollars. The Senators’ official starting goaltender before he was supplanted by Andrew Hammond this season, Anderson has spent the past five seasons in Ottawa, a place where he has played the best hockey of his career. Most recently, Anderson boosted the Senators’ 2014-15 playoff drive, recording a 0.97 GAA and .972% SVP in four games.

Let’s not forget about the Hamburgeler! Andrew Hammond’s exceptionally strong play in the final stretch of the regular season helped lead the Senators to a playoff birth. An average goaltender at the AHL level, Hammond recorded an amazing 20-1-2 record in 24 games played with the Senators this season to go alongside a 1.79 GAA and .941% SVP. Although he struggled somewhat in the playoffs, Hammond is a hero in Ottawa for his play at the NHL level this season, play which will make it difficult to trade or even demote Hammond, although he is set to become a restricted free agent come July 1st. 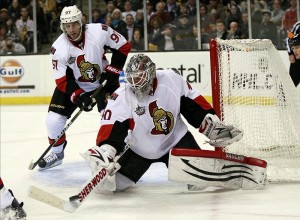 Despite having two quality goaltender’s in Anderson and Hammond, the Senators also possess the skills of Robin Lehner. Signed through 2016-17 at a cap hit of $2.2 Million dollars, Lehner once projected to be the Senators’ starting goaltender of the future, however Robin has been largely inconsistent at the NHL level.

Despite the current goaltending situation in Ottawa, O’Connor must have felt, and had similar communicated to him, that the opportunity for considerable NHL playing time existed with the Senators.

However, with three goaltenders with NHL experience and success in Anderson, Hammond and Lehner, it appears increasingly likely that Ottawa will need to trade one of it’s number of goaltenders in the near future.

Edmonton and Ottawa Ready to Deal?

Quite obviously, it was disappointing for the Edmonton Oilers and their fans to learn of O’Connor’s commitment to the Ottawa Senators, as had O’Connor signed with the Oilers, he could have received the vast majority of starts and playing time in the Oilers’ crease.

However, the Oilers have been extremely lucky in the past and present, in particular in the draft lottery as well as with attracting college free agents such as Justin Schultz.

[Related: Oilers Must Draft a Goaltender in 2015]

One other option for the Oilers in the Entry Draft. If the Oilers do decide to draft a goaltender at the 2015 NHL Entry Draft, it will still be a considerable amount of time before such a player adequately develops and begins to play at the NHL level. As a result, the Oilers must seek a goaltender, among other players, via trade.

With the Oilers’ goaltending situation looking increasingly bleak, it is time for the Oilers to trade for a starting goaltender, and the Ottawa Senators could be the perfect trading partner. Two of the Senators’ now four goaltenders who would most likely be available on the trade market are Craig Anderson and Robin Lehner.

In terms of potential Oilers interest, Anderson is without doubt the superior of the two goaltenders. However, at the age of 33 and with a history of injury troubles, Anderson could be an unreliable solution to a perpetual goaltending problem in Edmonton. Further, with a $4.2 Million dollar cap hit until the completion of the 2017-18, Anderson’s presence with the Oilers could create a cap crunch, especially so considering Edmonton hopes to bring in players of similar high quality.

The other option would be Robin Lehner. At the age of 23, Lehner has plenty of hockey ahead of him in his career, however his inability to thrive on a consistent basis at the NHL is a cause for concern. If acquired, Lehner would be a young goaltender of tremendous potential who could develop alongside the Oilers’ core of young stars. Under contract for another two seasons at a cap hit of $2.2 Million dollars, Lehner could use those two seasons to prove he can be a starting goaltender at the NHL level. Come the end of 2016-17, the Oilers could then decide whether to move on from Lehner, or re-sign him to a contract reflective of his play.

Although Anderson is a goaltender of superior skill and ability, the Oilers could lean towards Lehner, if any Senators goaltender, largely due to his young age and potential. The cost to acquire Lehner remains difficult to predict. Perhaps a package including the Oilers’ 16th overall pick in the 2015 NHL Draft, or possibly Nail Yakupov or Justin Schultz?

Whatever the case, the Oilers are in significant need of an upgrade in goal, and the Ottawa Senators could be the perfect trading partner to solve the perpetual problem between the pipes in Edmonton.