The Edmonton Oilers didn’t want to lose Sam Gagner. At least not now. Their depth chart at the center ice position is painfully thin. Ryan Nugent-Hopkins won’t be ready to start to the season and they traded away Shawn Horcoff. Boyd Gordon was next in line to be the team’s number one center. Gagner was somebody they needed. He likes the Oilers and they like him. The team knows what they’re going to get. Gagner has been improving as he continues to grow as an NHLer. He’s the perfect age to fit into Edmonton’s young core. 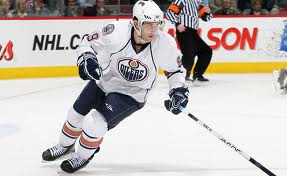 Today, the Oilers avoided arbitration, locking up Gagner to a new contract. The new deal is for three years, at a cap hit of $4.8 million. Reasonable number for a 23 who averages over 40 points a season. This past year he had 14 goals in 48 games. It’s safe to say he would have passed the 20 goal mark for the first time in his career had the year not been cut short due to the lock-out. A good comparison would be Toronto centerman Tyler Bozak. His new contract earns him $4.2 million a season. His career numbers are lower but close to those of Gagner. It’s a fair deal. It’s not the sort of contract that will have the Oilers tied up for an extended period.

But the real question remains: is Sam Gagner going to be a mainstay in Edmonton? Consider this. Taylor Hall and Jordan Eberle both signed big, long-term contracts. Nugent-Hopkins and Justin Schultz are both RFA’s next season. Maybe the Oilers and Gagner couldn’t agree on a number, and the three year deal worked best. Maybe Gagner himself wanted to keep his options opened down the line for fear he may fall down the depth chart. However at this point, the worst he could be on this team is a number two center, barring any other sort of trade or signing. That’s a pretty good gig.

So perhaps the Oilers weren’t prepared to commit long-term. Gagner is improving, slowly. There’s a chance the other forwards on this club will end up more valuable. After all, he’s been in the NHL for six seasons and has failed to hit the 20 goal, or 50 point plateau. The thing about Gagner is that he’s so young. He’s a veteran under the age of 25.

But the Oilers may see something we don’t. Maybe they believe he’s hit his ceiling. Maybe they still aren’t sure what they’ll get from him. In any case, Sam Gagner is an Oiler for the next three seasons (give or take). He’s going to be a huge part of the line-up, especially early on this season. Whether he fits in Edmonton in the future, that remains to be seen. Whether or not Craig MacTavish will acquire another center, we don’t know. But they needed Sam Gagner. They may no longer need him in three years, but right now, his signing was crucial. MacTavish knew that.

The NHL regular season schedule was released on Friday. Check out our partners at TiqIQ for the best deals on Edmonton Oilers tickets for all 2013-14 games.