Last week we looked at defensemen and goalies, this week its the forwards’ turn.

On forward, the biggest question marks for this season surround former thirty goal scorers Bobby Ryan and Milan Michalek. Neither Ryan nor Michalek had very good seasons last year. Both had signed lucrative extensions in the summer of 2014 and were expected to lead Ottawa’s attack. However, Michalek only managed to score 13 goals, a career low in a non-lockout season, while missing 16 games with injury. Similarly, Bobby Ryan, after suffering an early season hand injury, only scored 18 goals, with only four of those coming after the All Star Break. With $11.25 in cap space invested in these two, their lack of production is exceptionally concerning. So what does this season hold for both? Will fans see a return to form for the two snipers, or was last season the start of a long decline?

Will Bobby Ryan Bounce Back?

In regards to Bobby Ryan, yes, he absolutely will bounce back. The first encouraging sign is that when he was on the ice, he produced points. Ryan’s average points per 60 minutes (p/60) was 2.38 which ranked him 22nd among regular right wingers in the NHL. Other wingers with similar production? Phil Kessel, Marian Hossa and Blake Wheeler; which puts Ryan in pretty elite company. If Ryan wasn’t producing offence when he was on the ice that would be a major warning sign. However, despite suffering a possible broken hand last season, he made the most of his ice-time.

Furthermore, Ryan also consistently generated shots. He took more shots than any other Senators’ forward and was 40th in the league in shots. His problem was that he only scored on a career low 8% of his shots. Given that his career shooting percentage is 12.9%, if Ryan continues to produce shots at the same rate and scores on 12% of them, his goal total will rise to 27. Already that is a nine goal improvement from last year without taking into account a healthy hand, improvements in regular center Mika Zibanejad’s game, and opponents focusing their defensive attention on Marc Stone.

Finally, even though Ryan is approaching 30, he should remain productive as he ages. See the goal below against Winnipeg last season for proof:

Half of why Ryan scores because he is aware of where his teammates and opponents are on the ice and is able to find empty space in front of the net. The other half is a killer release on his shot. While not the hardest shooter, Ryan is able to shoot so quickly that goalies are often caught unaware. Watch this Bobby Ryan highlight package and count how many times the goalie just didn’t expect a shot. I guarantee it is a lot.  Neither his hockey IQ nor shot release will decrease substantially with age, meaning that Ryan should continue to produce into his 30s. Furthermore, as he demonstrated last season, Ryan is also comfortable playing more of a play-making role. His evolution into a more well-rounded offensive threat was part of the reason that line-mates Zibanejad and Mike Hoffman were able to both eclipse 20 goals and also demonstrates a willingness to change his game to reflect the needs of his team and his own evolving skill set.

Seen from that perspective, a 36 assist, a 54 point campaign isn’t necessary as large a disappointment as first imagined. Rather it represents a change in Ryan’s game combined with some bad luck when shooting. Eliminate the bad luck – by say, having a non-broken hand – and Ryan will be an elite right-winger for the Senators this season and beyond.

For Michalek the news is not so good. His points per sixty minutes for last season was 1.89, which is hovering between 2nd and 3rd line production. However, unlike Ryan, who has continued to produce shots at an elite, level, Michalek 130 shots last year only rank him 8th on the Senators. Furthermore, his 10% shooting percentage last season was perfectly in line with his career average (if we view his 35 goal season as the weird but welcome aberration it was). Now, Michalek did start a majority of his shifts in the defensive zone, so if deployed in a more offensive role he could certainly produce a little more, however, doing so would mean giving Michalek ice-time at the expense of more productive players, so isn’t likely to happen. Rather, he will probably slot in on the third line and be used in a predominately defensive role.

Part of the reason for his decline is that multiple knee surgeries, including an experimental treatment in Germany during the 2013 off-season, have drastically reduced Michalek’s top end speed and speed was how Michalek scored goals. Watch how he leaves Evgeni Malkin in the dust on this goal. 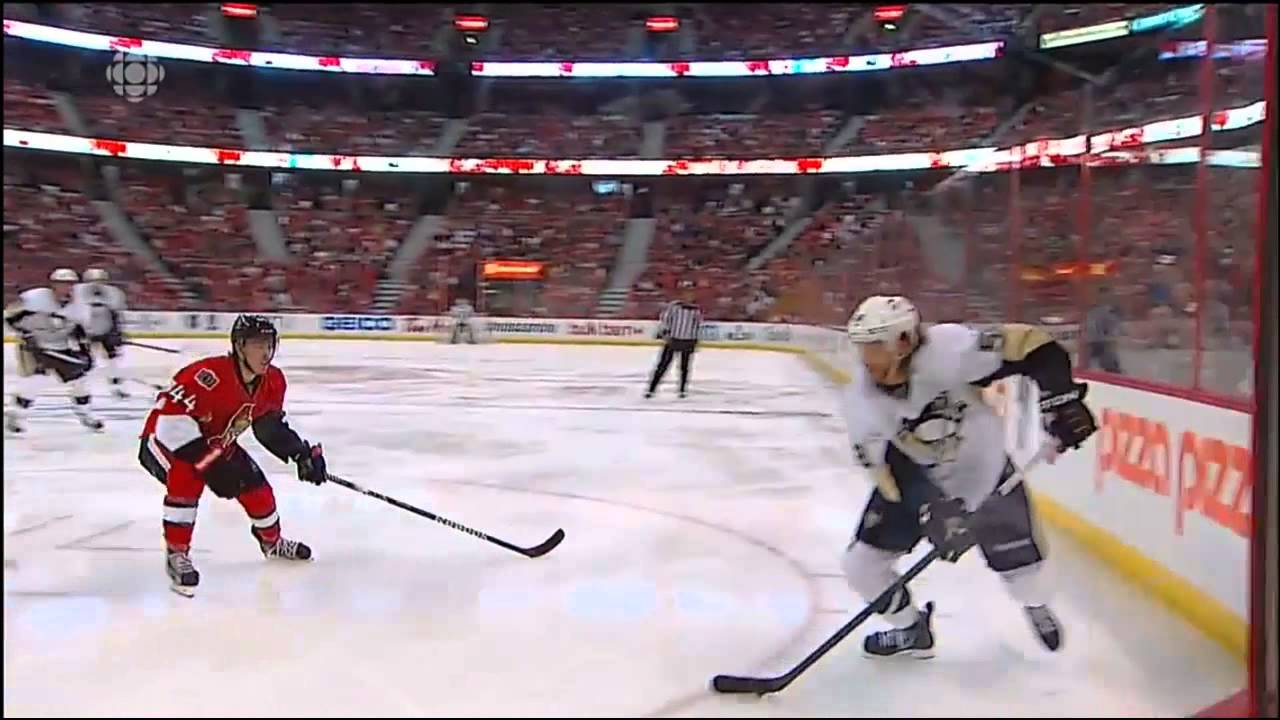 Michalek was never a particularly creative player. Rather, he was able to use his fearsome combination of speed and strength to beat defenders. However, now, rather than being the fastest player on the ice, Michalek is simply average; meaning he can’t rely on blinding speed to beat guys. Sure, he is still an average skater, has decent hands and is strong enough to win battles in front of the net, but his unique ability that made him an above average player is mostly gone. He is skilled enough to be a top six bubble player who can contribute to the top two lines if needed, but is probably better suited to playing on the third line.  Ultimately, Ottawa fans will have to accept that Michalek will probably cap out at 15 goals and 40 points; his thirty goal scoring days are behind him now.

Bobby Ryan will most likely start the season on the second line with Mika Zibanejad and Mike Hoffman. As I’ve described above, multiple different factors will combine to ensure that 2015-2016 is Ryan’s most productive in a Ottawa jersey. 30 goals and 70 points certainly isn’t out of the question but he will probably finish the year somewhere around 26 goals and 60 points; a bounce back season for sure. For Milan Michalek the prognosis is less optimistic. He will probably start 2015-2016 on the third line with J.G. Pageau and Curtis Lazar. If he remains healthy he should be able to score 15 goals and put up another 20 assists, finishing the season with 35 points, a very small improvement from last year and the new normal for his career.