OTTAWA — Ryan Dzingel scored on the power play in overtime as the Ottawa Senators defeated the Pittsburgh Penguins 2-1 on Saturday night.

Thomas Chabot got Senators (13-14-3) on the board in regulation. Craig Anderson was kept busy, stopping 35 shots.

Jean-Sebastien Dea scored the lone goal for Pittsburgh (12-11-5), while Casey DeSmith made 27 saves.

The Senators took advantage of the Penguins taking a penalty for too many men on the ice in overtime as Mark Stone set up Dzingel for the winner. Stone finished with two assists. 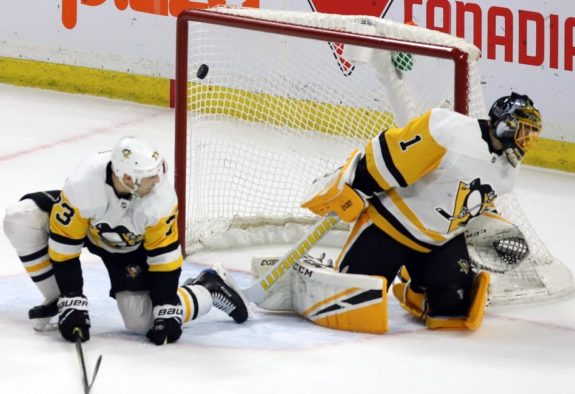 Ottawa was without the services of its leading scorer Matt Duchene, who the team announced earlier in the day would be out weeks with a groin injury. The Senators also revealed Bobby Ryan would be sidelined indefinitely with a concussion.

Tied at one goal apiece, the third period was eventful with both teams having power-play chances, but were unable to capitalize on their opportunities.

Midway through the period Sidney Crosby fed Kris Letang who had a great chance, but rang a shot off the crossbar.

The Senators appeared to jump out to a 2-0 lead in the opening minute of the second period. Zack Smith found the back of the net off his own rebound, but the Penguins challenged the goal and upon review it was ruled the Senators were offside.

Three minutes later Dea, who was recalled from the American Hockey League on Friday, picked up a loose puck and beat Anderson glove side with a shot from the circle.

With Derick Brassard in the penalty box, the Senators generated a number of chances on the power play, but were unable to beat DeSmith.

Despite the Penguins outshooting the Senators 16-7 and controlling the play much of the first period, it was Ottawa who led 1-0 heading into the first intermission.

Stone fed Chabot at the point who fired a puck through traffic to beat DeSmith glove side. Chabot has eight goals and 25 assists to lead all defencemen in scoring.

Notes: D Christian Jaros was a healthy scratch for the Senators, while Mark Borowiecki missed his eighth straight game with an upper-body injury. Pittsburgh defencemen Chad Ruhwedel and Juuso Riikola were healthy scratches.