Now that the smoke has settled following crazy trade rumours involving P.K. Subban, Montreal Canadiens fans can exhale – as the leader of their defence is here to stay. The NHL all-star is one of the most talented defencemen in the world, and he has a Norris trophy to prove it. The past year of his life has summed up what makes him so important to the Montreal community, and to the Canadiens’ roster. When the Habs lost star goaltender, Carey Price, the pressure in the most passionate hockey market in the world was turned up to a new level. Though there was so much extra pressure on Subban, he has made a habit of saying the right things at the right times. P.K. is a leader in the Canadiens’ locker room, and in the face of adversity this year, he has shown that his character, and his spirit won’t be broken.

Playing in Montreal definitely has it perks: The city is filled with hockey fans who understand the game, and who care about their team. That said, every player that plays for the Canadiens faces intense pressure from the fanbase, and the media. Since the fans in Montreal are so passionate, they know pretty much everything that goes on with their team. Everything that a Habs player goes through is known by the public in a matter of minutes. The pressure of playing in Montreal has actually driven some players away from playing for the Canadiens (which in some cases, worked out for the better).

Subban is one of the most flamboyant players in the entire league; he doesn’t shy away from getting himself noticed. This has earned him lots of negative attention from the market in Montreal, as many criticize him for being so out there. On the other hand, the more reasonable fans have embraced his personality – and view him as a piece of Montreal’s community as well as their hockey team. The Toronto native’s year started off with a hefty donation to the Montreal Children’s Hospital, and it has escalated to the point where his name was being tossed around in trade rumours.

Throughout this hectic year where the Canadiens went from being the best, to one of the worst teams in the NHL, Subban has continued to impress on and off the ice. The defenceman’s on-ice play has been surprisingly steady, despite the Habs’ great struggles. Through 60 games this season, P.K. has registered 5 goals, 41 assists, and a plus-7 rating while playing an average of 26:09 per game (per. Hockey Reference). Subban has been one of the only consistent parts of the Canadiens’ season. His risky style of play rarely costs him, as he has learned how to manage the risks that he takes in-game. While playing over 26 minutes per game for a team that currently has a negative goal differential (more goals against than goals scored over the entire season), P.K.’s plus-7 rating is quite impressive. His stats also prove that he has been doing his part offensively, which is important – considering the Canadiens’ struggles to score. Montreal fans are very critical of the defenceman, though he has proven that he is doing everything that he can to help this team succeed.

Subban has learned how to carry himself like a true gentleman off the ice. He has grown as a person since being drafted by the Canadiens in 2007. Coming into the league, Subban was a raw, risky talent who had many doubters. Since then, he has matured into a true leader and an ambassador for the game. His donation to the Montreal Children’s Hospital was an extremely generous gesture, as he gave back to the community that had been so good to him since his arrival. Though a player like P.K. draws lots of media attention, he always knows what to say, and always knows how to carry himself and his public image.

As mentioned earlier, P.K. was the subject of trade rumours last week. These trade rumours surfaced after the defenceman was called out by coach, Michel Therrien following a loss to the Colorado Avalanche. Since then, it had been reported that Subban was being shopped on the trade market by the Canadiens, and that they were listening to offers on him. These reports ended up leading to a statement from TSN hockey analyst, Darren Dreger, who assured the hockey world that Subban wasn’t being shopped. P.K. responded professionally when asked about the rumours. The Toronto native went out the next game and made up for his error against Colorado – as he recorded 2 assists against Philadelphia, and was named the first star of the game. P.K.’s first star interview after the win against the Flyers ended with him letting the hockey world know that he “Loves Montreal.” This was only a small example of his personality, as he showed how he responded to trade rumours, and to his coach calling him out. 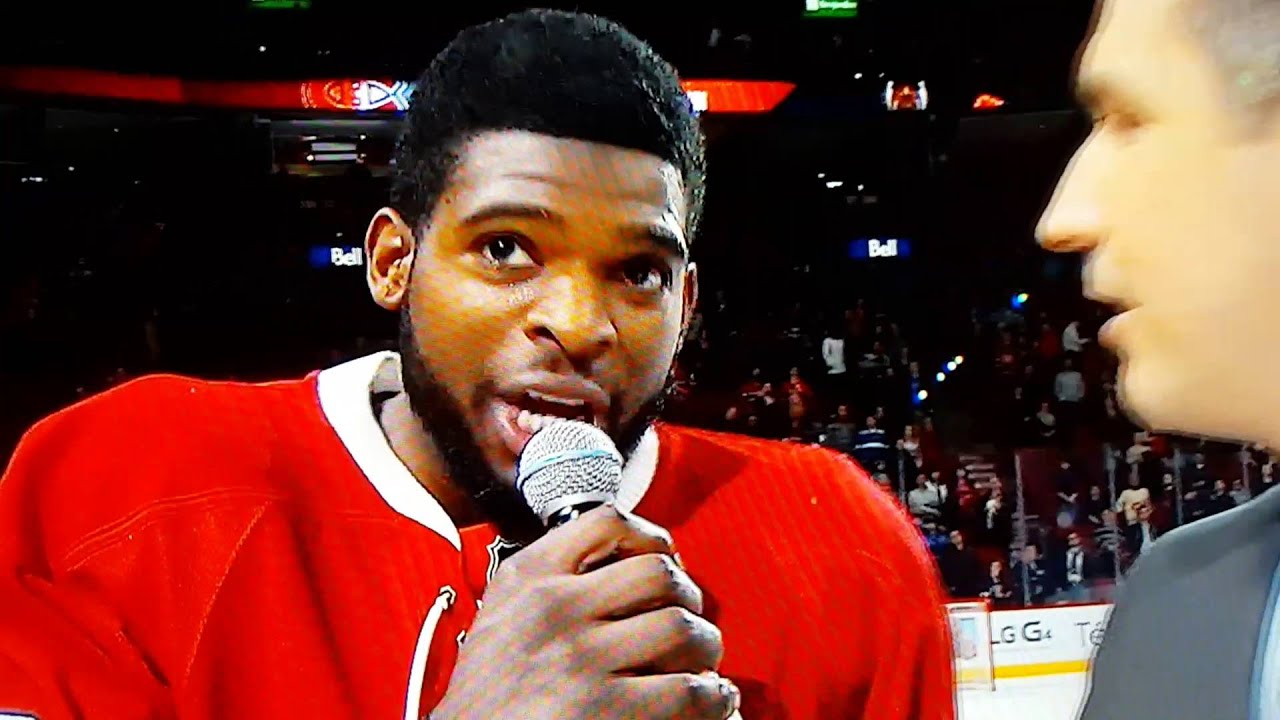 P.K. Subban Has to Be Himself

Subban is beloved by the majority of the Canadiens fanbase, and with good reason. The defenceman is more than just an excellent hockey player; he has also become a part of the Montreal community. He has learned to carry himself like a true gentleman – even when facing adversity. He is, and will be a part of the Montreal Canadiens for years to come. P.K. Subban is a crucial piece in the Canadiens’ long-term success, so Habs fans had better get used to his big personality. After all, his play backs it all up.