In this translated interview, originally appearing on sovsport.ru, Red Wings forward Pavel Datsyuk discussed the World Cup format, praised young defenseman Alexey Marchenko, and remembered playing with Brett Hull. Datsyuk is having yet another great season, while rookie Alexey Marchenko is getting his first NHL long stint, having played 10 games so far and finally being injury-free. Marchenko played his first NHL game last year, on January 4th 2014, against the Dallas Stars.

For the original sovsport.ru interview by Pavel Lysenkov, click here.

– Pavel, how did you like Alexei Marchenko’s game? [Note. This interview has been taken after the Red Wings’ 7-6 OT win over the Dallas Stars on February 21st]

– He is recommending himself as a good player. I think that he’s on the right path. He needs to gather some more experience, but if he keeps on playing that well he can get a full-time spot in the team.

– You always score many game-winning goals.

– Well, it’s a full merit of the whole unit, the whole team. I need to score more goals. Sometimes I score some goals, then I kind of disappear. I’ll work on this aspect of the game. Thanks God, [against the Dallas Stars] everything worked.

– Some years ago you played very well with Brett Hull. Today Detroit has a new young goalscorer in the team, Teemu Pulkkinen. Wouldn’t you like to play on a line with him?

– After all it’s a decision for our coach. And probably it’s still early to compare Pulkkinen to Hull. Brett was a great player with a capital letter, and I will always remember the experience he gave me and playing with him was truly great. He had no rivals in getting open and find the right spot for a good shot.

– You’re known for your good sense of humor, but mostly in Russian language. Do you try to do the same in your English interviews?

– I never prepare my jokes earlier. It’s all improvisation. It’s hard to translate these things from Russian to English, but I try hard. 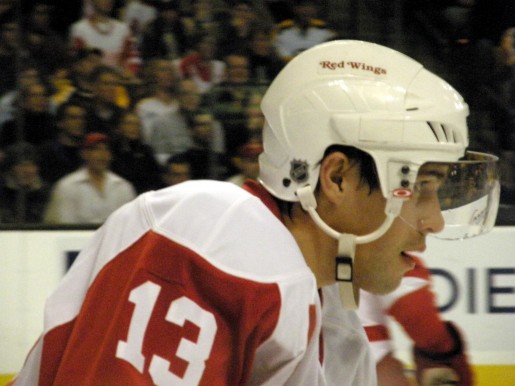 – During the warm-up I noticed that something changed. And now I notice it: it’s in your hair. Are you trying to change your look?

– I just had a haircut. We’re going to play in warmer places. It was cold at home and I wanted to change something.

– I follow my home team [Avtomobilist Ekaterinburg], who just got to the playoffs. I congratulate them! I heard from my friends that they just have another couple of game, then they will start their Gagarin Cup run.

– Who is the main contender [for the Gagarin Cup]?

– Forecasts are a thankless job. Let meteorologists do it.

– Do you like the new World Cup format? North America will have two teams, senior and junior, and other nations will have one.

– This may be good for the guys on the junior team, they will have a chance to play with older players and gather some experience. But it’s not good in relation to other countries.

– Maybe Russia will send their junior team too?

– Each junior national team has a different level. I think that they should gather a team with young players from all over the world, to form a Team World, not only a Team North America. You can find good young players in any country.