The rise of the analytics age in hockey has caused a stir over the use of new metrics in explaining player and team performance, drafting, as well as acquisitions via trades and free agents. Now, the latest claim reported by USA Today is players may be manipulating advances statistics to boost their leverage when negotiating contracts.

According to the report, players are taking shots from anywhere on the ice to help boost their Corsi. Since Corsi is an aggregate of a player’s shot attempts, regardless if they are on net or not, any shot towards the net would increase a player’s Corsi total. A higher Corsi would indicate a player is better at possessing the puck, and could be used as a positive indicator of a player’s ability in contract talks.

At face value this claim makes sense — player’s have incentive to act in a manner which will maximize their earnings potential. If that means throwing more stray shots towards the net to boost their advanced statistics profile, than why not exploit it?

However, there is very little statistical backing to support this claim.

Looking at data from hockey-reference.com, advanced statistics started being collected during the 2007-2008 season. The first plot below shows how each player’s Corsi per game has trended each season over the past decade — including thus far this season. 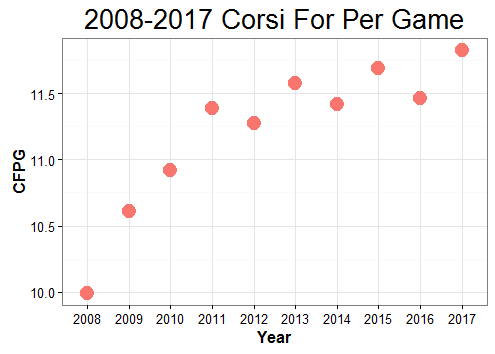 This first plot would insinuate a trend that backs the claim of players manipulating the system — Corsi has increased slightly per game each season over the past ten years.

However, correlation isn’t always causation. A player’s Corsi total isn’t a measure of their personal attributions, but how many total shots were attempted by the team while they were on the ice. If the goal is to see if more stray shots are being thrown towards the net to improve statistics, Corsi isn’t the appropriate metric to evaluate. Instead, we should look at Shot Attempts and Shot Thru %. 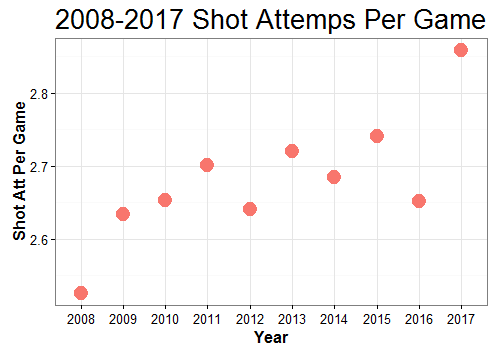 This plot shows how Shot Attempts per game have changed on average per season for each player since 2007-2008. Aside from two outliers in 2007-2008 and thus far this season, this number has remained fairly constant over the past decade.

Possibly the most valuable metric to evaluate if players are blindly throwing more pucks towards the net to improve their advanced statistics would be the Shot Thru%. This number tells us what percentage of a player’s shot attempts actually were on goal. If players were manipulating the system in their favor, we’d expect to see this number decrease.

What have we observed over the past decade? 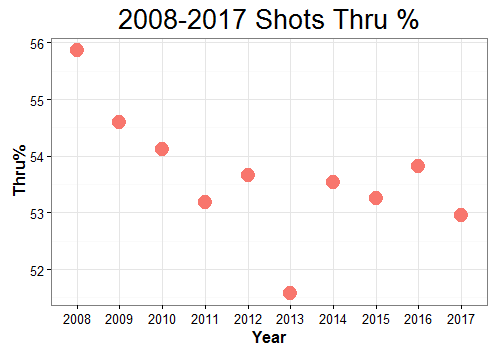 Again, there is no linear trend that would insinuate a decrease in player Shot Thru% over the past decade. Aside from outliers in 2007-2008 and 2012-2013, this number has been consistent each year. Since 2010-2011, this number increased in the first year and then decreased across the league the following year.

There are other ways to study this conundrum.  Specifically targeting players in contract years, and those who just received an extension would be one way. However, the initial data shows that it’s unlikely a different trend amongst those players will emerge.

In whole, players do have incentive to try to boost their earnings potential throughout the duration of their career. Earnings are maximized by creating scoring opportunities, limiting opposition attempts, and making plays that help improve a team’s win probability on a nightly basis. Throwing pucks blindly towards the net doesn’t help teams win, or help players earn more on their next contract.

Write to codyreiff@email.com. All data in this article is courtesy of hockey-reference.com