Now in its 11th year, the World Junior A Challenge is a top showcase for skaters across the world playing junior A hockey. This year’s tournament features two NHL draft picks, 48 players committed to NCAA programs and 19 players who made Central Scouting’s preseason players to watch list for the 2017 NHL Draft.

The Challenge kicks off Sunday in Bonnyville, Alberta and runs for seven days, with the championship game taking place on Saturday, Dec. 17.

Here are 10 players to keep your eye on as the 2016 tournament progresses.

The University of Minnesota-Duluth commit and 2017 draft eligible is an intelligent defender with strong skating skills. There’s good reason the Waterloo Black Hawks (USHL) used a tender on him last spring. He’s capable of making plays to spark the offense, which was the exact reason he earned a USHL Defenseman of the Week honor in the season’s opening weeks.

His offense has cooled a bit since then, but Anderson nonetheless has the ability to make an impact for the U.S. from the blue line. He may also be a key penalty killer for the U.S. 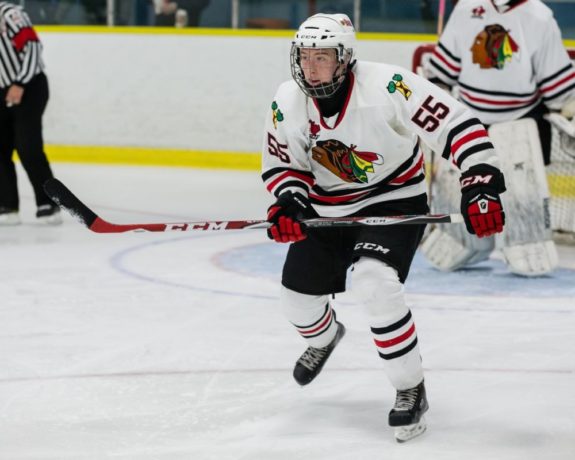 The 17-year-old defenseman and Boston University commit could be a lynchpin for Canada East at the Challenge. He hasn’t put up many points for the CCHL’s Brockville Braves, but Crotty is effective at both ends of the rink.

Central Scouting has praised how he “dictates pace of play” and is a “decisive puck-mover.” He’s expected to be selected in the second or third round of the 2017 Draft.

Along with Crotty, Keenan should be a leader for Canada East. The 18-year-old is putting up nearly two points per game with the Whitby Fury in the OJHL and has his eyes set on being an impact player next year with Princeton. He’s an alternate captain for Canada East and his praises sound similar to how scouts talk about Badger captain Luke Kunin, calling him a two-way center with good leadership qualities and an impeccable work ethic.

Kostin is the only A-rated prospect in the tournament. He’s expected to go in the top 10 at the 2017 Draft, rising as high as sixth overall in a recent Sportsnet ranking (same rank in the last Future Considerations ranking). There were many who were surprised he didn’t make Russia’s World Junior roster.

Russian World Junior team coach Valeri Bragin said rink size at the 2017 WJC was a part of not having Kostin on the roster. “If [World Juniors] was held in larger venues, we would consider Klim Kostin, but the tournament will be held in small venues,” Bragin said (in a crude translation). “He lacks explosive qualities.”

He’s an immensely gifted offensive talent and has been shining on the international stage this year, posting three points in November’s Canada-Russia series, as well as registering four goals and seven points in five games at the 2016 Ivan Hlinka Memorial Cup. He could be a show-stopper at the Challenge.

The captain of Canda West and future UMass-Amherst defender will be a pillar for the team. Skating for the Brooks Bandits of the AJHL, Makar has been a dynamic offensive force from the blue line, putting up 38 points (11-27-38) in the season’s first 28 games. Given a B rating by Central Scouting in their preseason list, he’s proven scouts right with “very quick hands and feet” and an ability to “create something out of nothing.”

Even before the tournament starts in earnest, Makar has made an impact, scoring the game-winner for Canada West in their scrimmage against the U.S. on Friday.

The University of Denver commit isn’t quite the offensive force that Makar is (both skate in the AJHL), but Mitchell is having success at both ends of the ice. He’s lauded for an ability get the puck moving in the right direction and having the vision to transition through the neutral zone.

Pena-Triana is a player to watch on the Swiss side. At just 16, he’s one of three 16-year-olds participating in the tournament. Those three will be the youngest three players to ever participate in the tournament. Pena-Triana is the oldest of those three with Canada East goaltender Hunter Jones coming in second and Russia’s Nikita Okhotiuk, who turned 16 last week, setting the mark for the youngest player to ever participate in the Challenge, according to Hockey Canada.

Central Scouting has praised Pena-Triana’s ability to play larger than his 5-foot-10 frame and use his impressive speed to create offense. 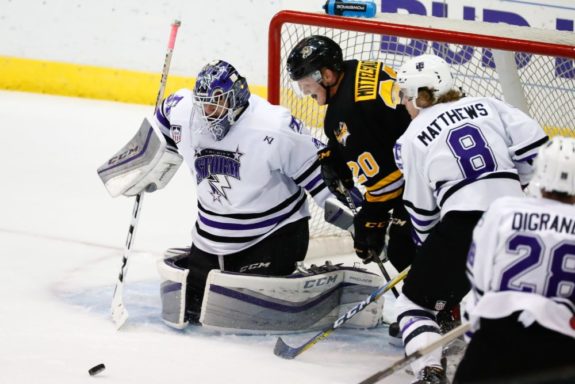 These are the two netminders the U.S. are bringing to the Challenge. They’re also the top-rated 2017 draft eligible netminders in the tournament, with both taking a B rating from Central Scouting. Primeau, son of NHL legend Keith Primeau, is a Northeastern commit. Even though he’s struggled at times with the Lincoln Stars (USHL), he’s taken the majority of the team’s starts this season.

Rasmussen has grabbed an overwhelming majority of the games for the Tri-City Storm (USHL), posting a .904 save percentage in 16 games.

The only 2017 eligible to make the Central Scouting players to watch list for the Czech Republic is Sirota, a responsible two-way skater. He has good size and decent vision. He doesn’t produce much offensively, but he’s been an asset to the Cedar Rapids RoughRiders this season and could eat up a lot of minutes for the Czechs at the Challenge.

One of just eight skaters in Alberta that could be picked in the 2018 Draft, Svechnikov has the potential to be one of that draft’s top picks. He’s been playing with the Muskegon Lumberjacks this season and isn’t having any issues transitioning to North America. He has 24 points (10-14-24) in 17 USHL games (fifth overall in points), including a 13-game point streak that just ended in a 4-1 loss to Omaha last week.

(That’s Primeau allowing the shootout goal to Svechnikov in the video above.)

He led all skaters at the World Under-17 Hockey Challenge in November with five goals and eight points in four games. He also posted four goals and five points in five games at the 2016 Ivan Hlinka Memorial Cup.

With teammates Kostin and Alexei Lipanov, he could be one of the biggest offensive threats playing in the tournament. Both Svechnikov and Lipanov posted a goal and two assists in Russia pre-tournament tilt against Canada East.

The World Junior A Challenge starts Sunday and will be streamed daily on Hockey TV (formerly Fast Hockey).