I reviewed the Nashville Predators’ promising playoff prospects two weeks ago, and now, with just four regular season games to go over the next week, it is time to take another look. First, a review, how has my prediction held up? For those predictions, I gave the Predators a win against teams they had a winning record against, an over time loss when the records were about even, and a regulation loss when the they had a losing record against the opponent. The Preds are a bit behind that, but they remain within range of the franchise-best 111 points, a mark they can still reach if they can win out. 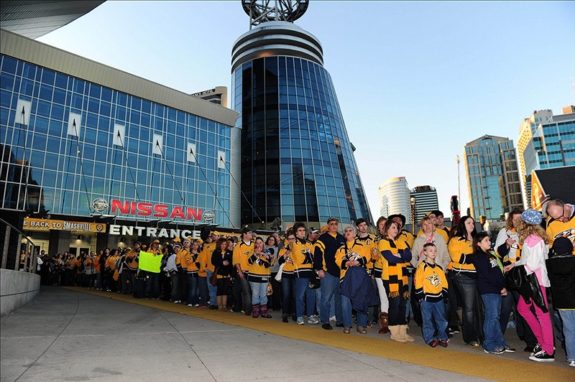 While Nashville has already clinched a playoff spot and is currently number one in the Central Division ahead of the St. Louis Blues and the Chicago Blackhawks, their hold on the top spot is tenuous. The Central is easily the tightest division in the league with the top three teams already in the playoffs (only the Atlantic division has more than one) and a total point differential across the three teams of just one measly point. Obviously Nashville wants to win out, but what happens in St. Louis and Chicago is equally important to secure home ice.

Can the Predators Win Out?

The Predators have 103 points, and 8 are still on the table, the first two of which come up tonight at Bridgestone against the Dallas Stars, a team the Preds play again, in Dallas, next Saturday. The Predators are already 3–0 against the Stars, with 4–1 and 3–2 (OT) wins in Nashville and a 3–2 win in Dallas. Dallas is 6–4–0 in their last ten games, but just 1–3 in their last four, giving up nearly five goals a game. That’s good news for the Predators, who have struggled on offense at times throughout the season. It shouldn’t be much of a stretch for Nashville to pick up those four points with an offense that has been clicking lately. Plus, injured forwards James Neal (nine games) and Matt Cullen (six games), in addition to captain Shea Weber (three games), have made the last few practices, and it is looking like all three will be back in the linup against Dallas tonight. 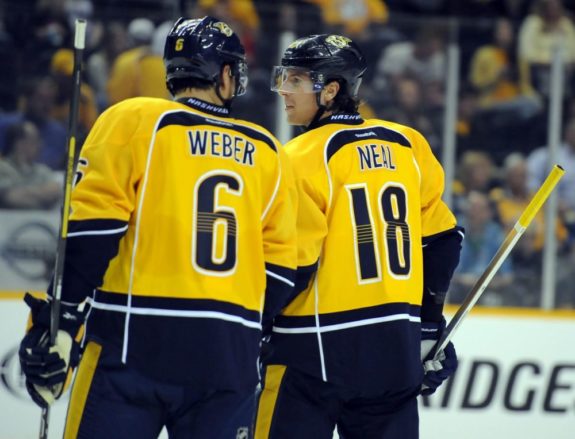 Picking up the two mid-week games will be tough. The Predators play at Colorado on Tuesday. In Colorado, Nashville has gone 1–1, with a 3–0 win and a 0–3 loss, making that game a toss-up. On Thursday the Predators face the Minnesota Wild in Nashville. While the series is 2–2 this year (with one of Nashville’s wins in OT), all four wins went to the away team. I count both of those games as fifty-fifty, and hope that Nashville can get two points between the two games.

While the Predators do have the tiniest of edges over the Blues and the Blackhawks (the Predators have the regulation plus overtime wins tiebraker over the Blues, and one point on the Blackhawks), keeping them at bay will be tough. Luckily, their schedules work to Nashville’s advantage. Each of Nashville, St. Louis, and Chicago play four more games. Somewhat fortuitously for the Predators, the Blues and Blackhawks play each other … twice. Whatever happens in those games tomorrow (Sunday) and Thursday, the highest priority is that they end in regulation to limit the total number of points. The Blues face the Winnipeg Jets and the Wild, both at home, while the Blackhawks also face the Wild (home) and the Avalanche (away). These games are mostly winnable for the Blues and Blackhawks. 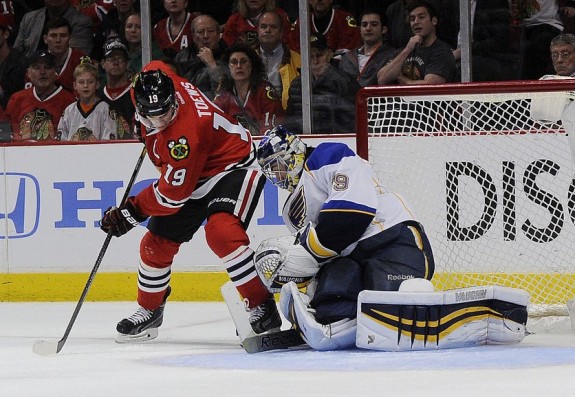 Predators fans want to root against St. Louis and Chicago whenever possible, and when they face each other, root for a quick ending. Since the Predators have an easier schedule down the stretch than the competition, home ice advantage is Nashville’s to lose.