Doug Weight makes his debut as head coach of the New York Islanders as they host the Dallas Stars at Barclays Center. The Islanders blanked the Boston Bruins 4-0 behind the strong goaltending of Thomas Greiss on Monday. The Stars are fresh off a 7-6 shootout victory over the New York Rangers on Tuesday night.

The Islanders fired head coach Jack Capuano on Tuesday because of the team’s slow start. Capuano had been behind the Isles bench since Nov. 15, 2010. Weight has served as an assistant coach and assistant general manager in recent seasons but this is his first game as a head coach. He is expected to keep the same systems the team has used all season in place.

The Stars snapped a two-game losing streak with an exciting 7-6 win over the Rangers at Madison Square Garden on Tuesday night. Tonight’s game is the conclusion of a three-game road trip for Dallas. They have struggled all season on the road, winning just seven of 23 road contests thus far (7-12-4).

The Islanders will again start Thomas Greiss in goal. He has played well since becoming the full-time starter and shutout the Bruins on Monday in the team’s last game. The Stars will start Kari Lehtonen in net. He’s played well in relief during the team’s 7-6 win over the Rangers on Tuesday.

Both of these teams had disappointing first halves after entering the season with high expectations.

1) Both of these teams have struggled on special teams this season. The Islanders are ranked 27th on the power play while the Stars penalty kill is 29th in the league entering tonight’s game. On the road, Dallas kills just 65.4 percent of opponents’ power plays. The Isles must take advantage of this weakness.

3) The Islanders have done very well against Western Conference opponents at the Barclays Center. This season, they are 6-2-1 at home against the West, and overall since moving to Brooklyn last season, the Isles are 18-2-3.

4) Tyler Seguin has been red hot for the Stars. He now has 12 points (six goals and six assists) in his last 11 games. The Islanders will have to slow Seguin down if they hope to contain the Stars’ offense.

5) The Stars have struggled against the Eastern Conference this season. Dallas is just 3-7-3 in games against teams from the East. 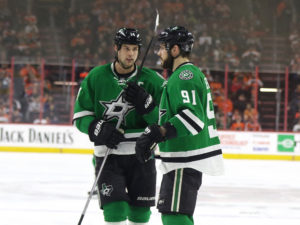 These two teams are both similar. They had disappointing first halves of the season after successful campaigns a year ago. Both are clinging to slim playoff hopes and need to go on a long streak to get back into the race.

It will be interesting to see how the Islanders react to their new coach. Weight is more outwardly emotional than Capuano and the team may reflect that approach — especially the first few games of his tenure.

A win tonight for the Stars would give them two victories in a three-game road trip and possibly something to build on. They obviously need to be better defensively then they were against the Rangers on Tuesday, especially in the neutral zone where the Blueshirts had too much room to maneuver.