As the 2016-17 NHL season inches closer to the halfway mark, let’s take an early look forward at the potential playoff picture.

The advanced metrics CF% and PDO have become mainstream in hockey analytics when looking at team performance, and for good reason. As I have discussed previously, using both of these metrics together can help predict a team’s output fairly accurately over a representative sample.

While these metrics help give us a snapshot into the future, they don’t come without their shortfalls.

Over the rest of the season, there are numerous variables that will come into play, affecting how a team climbs or falls in the standings. Some of these factors include injuries, trades, and strength of schedule, to name a few.

With that being said, let’s see who the data predicts will be vying for the Stanley Cup in the playoffs come this April.

This plot shows each team’s current PDO and CF% relative to their points – the size of each dot represents their current point total. The size of the dots trends towards the top right corner of the plot, indicating teams with higher PDO and CF% totals are most often the ones with the highest point totals in the standings.

As represented by this box plot, the Metropolitan Division has been far and away the best in the NHL thus far this season. Five of the top seven teams in the league come from the Metropolitan, as well as both of the Eastern Conference wild card teams.

This plot shows each team’s projected point total relative to their current PDO and CF%. Most of the teams near the top of the standings are expected to remain there at the end of the season. The highest projected total belongs to the Columbus Blue Jackets, who are projected to finish the season with 122 points. The leader in the race to the bottom is the Colorado Avalanche, projected to finish with a mere 68 points.

What does the projected NHL playoff bracket look like? 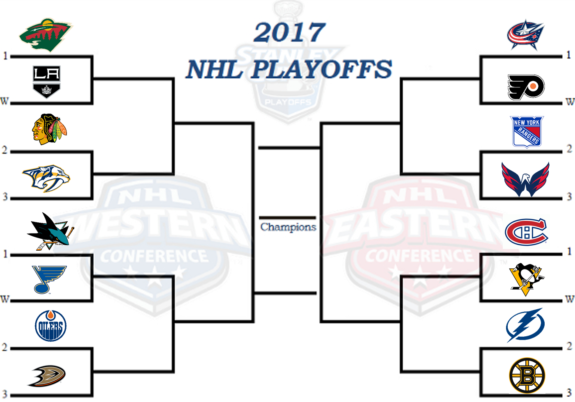 The biggest jump in current standings to projected finish belongs to the Nashville Predators, who are on pace to finish third in the central division. The Predators currently sit six points behind St. Louis for the third spot in the division, so this jump represents a fairly strong bias towards their advanced metrics. Nashville touts a slightly below average PDO of 99.98, but an above average CF% on the season of 52.46%.

The young Edmonton Oilers are second in the Pacific Division, and are expected to hang on to their current standing. It is worth noting the Los Angeles Kings could outpace their projected point total – this is because they are expected to have star goaltender Jonathan Quick return in mid-February. The marginal production he brings to the team isn’t accounted for in the Kings’ projection.

Here are the projected point totals for every NHL team:

Write to codyreiff@email.com. These projections and standings are as of the end of 12/14. All data in this article is courtesy of Corsica Hockey.