With the changing of the calendar to December, many might be surprised to see the Columbus Blue Jackets sitting atop the Eastern Conference wild card standings. The Jackets were seventh in their division and 26th in the NHL in points at the end of October, but are now amongst the top 10 in the league. For those who were paying attention to Columbus’ advanced statistics, this is no surprise.

Last month, Columbus was ranked eighth in the league based solely on their Corsi For % (CF%) and PDO. The large discrepancy between their analytics and actual position in the standings insinuated they were due for better fortune — a 10-2-2 record on the month would prove this to be true. Columbus finally found the greener pastures they long sought after and showcased the power of analytics along the way.

This brief case study of Columbus emanates the power of utilizing advanced metrics such as PDO and CF% in team analysis. Columbus had the seventh highest PDO in the league through October — making it a wonder how they were losing so often through the first month of the 2016-2017 season. The Jackets were able to increase their PDO while also improving their CF% in November, which inevitably led to wins in the standings.

Now that November is behind us, let’s look to see who the best performers were this month and through the quarter mark of the season.

The model to create the power rankings below is based solely off a team’s CF% and PDO thus far through the season. Using data dating back to the 2007-2008 season we can see how teams stack up amongst one other based solely on their advanced metrics. 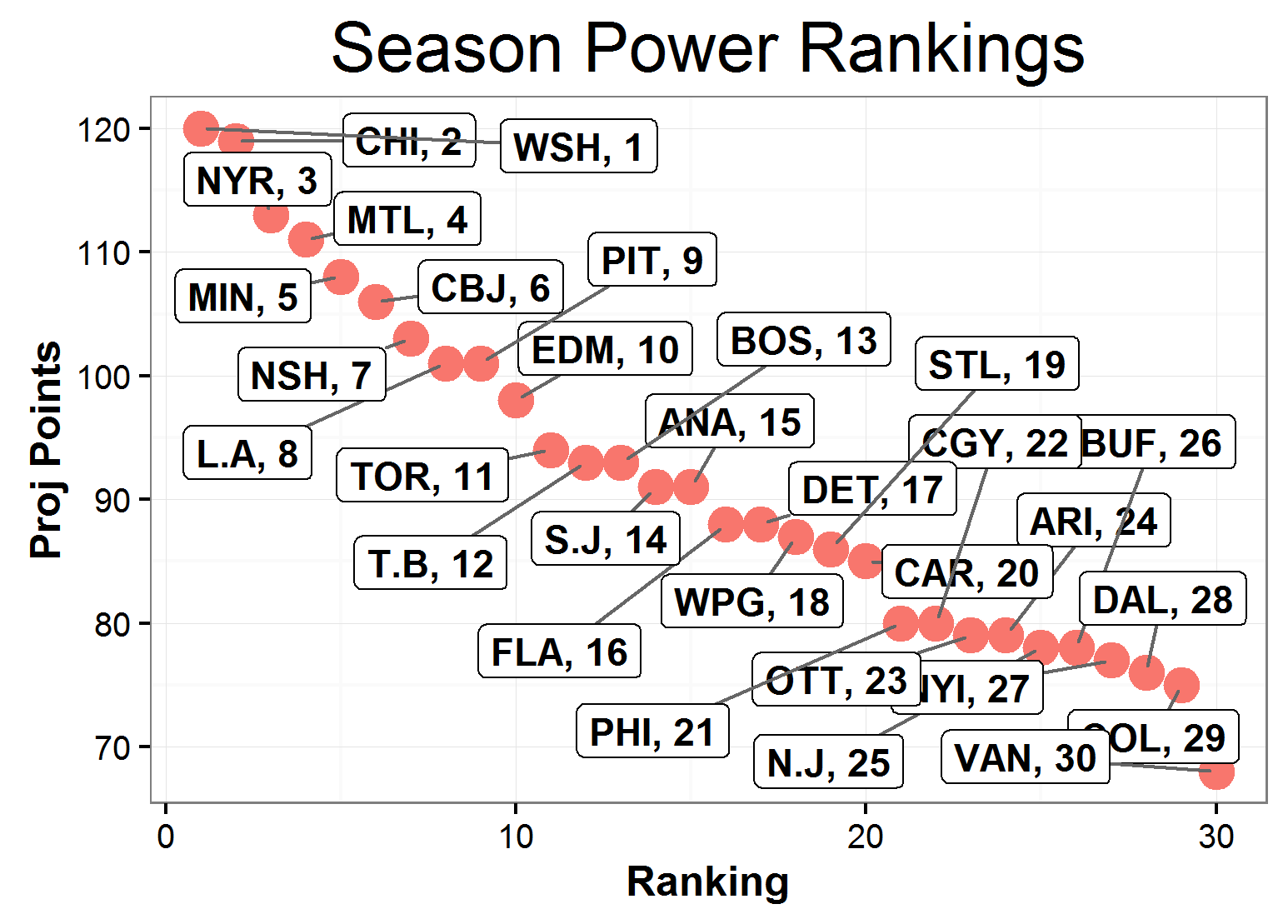 Despite a strong month, the Blue Jackets only moved up two spots in the power rankings. The Washington Capitals jumped to the top spot thus far through the season, posting a PDO of 102.73 and CF% of 52.1, through their first 21 games. The Chicago Blackhawks, New York Rangers, Montreal Canadiens, and Minnesota Wild round out the top five — each of which were in the top five through October as well.

The two plots below show how teams stacked up in their divisions this past month by CF% and PDO. The Toronto Maple Leafs led the way in the Atlantic Division with a PDO of 103.59. The Leafs drastically improved upon their PDO from the end of October, when it was a measly 95.83. The Rangers have seen a fairly drastic drop in their CF%, dropping from 53.65% in October to 43.71% in November — good for last place in the NHL for the month. 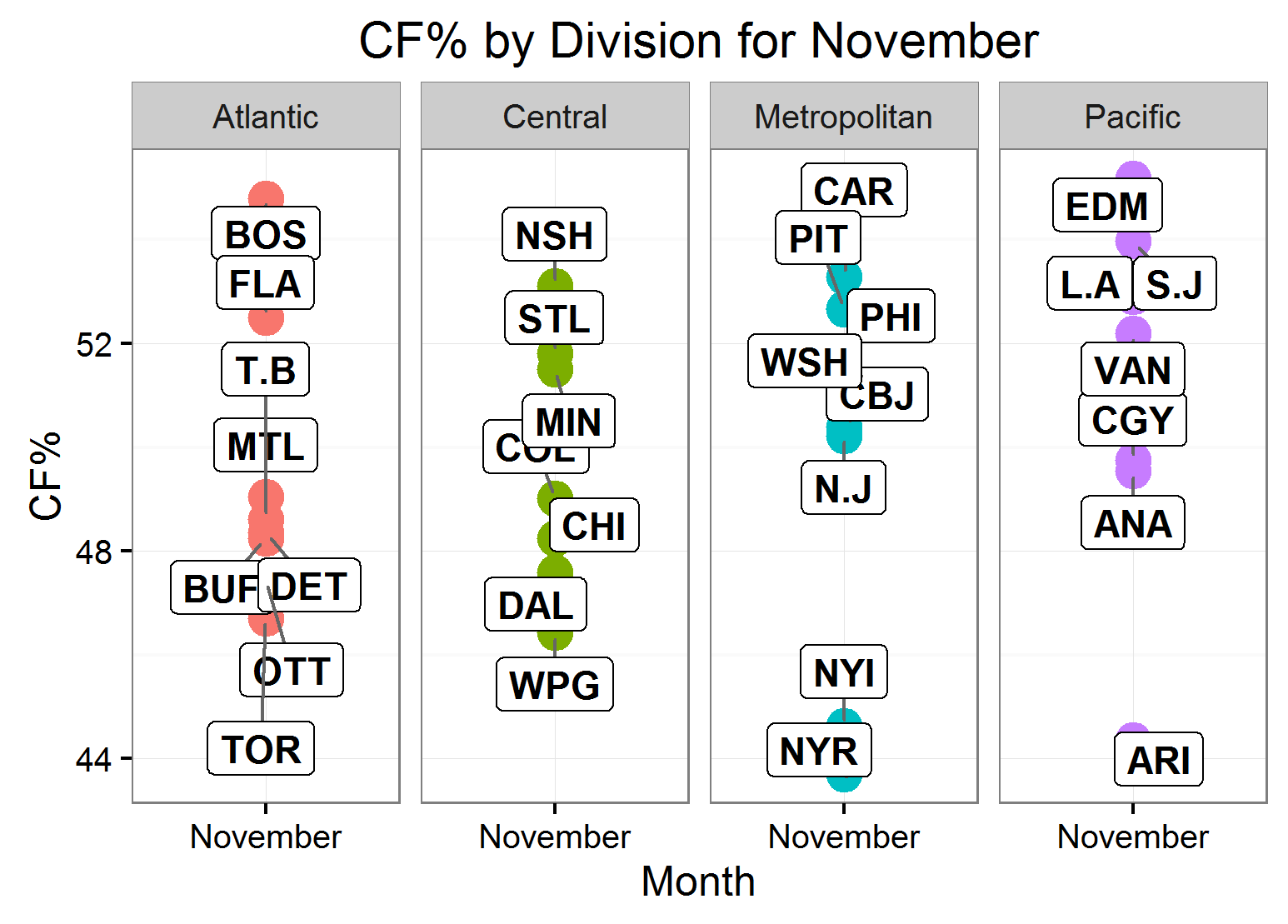 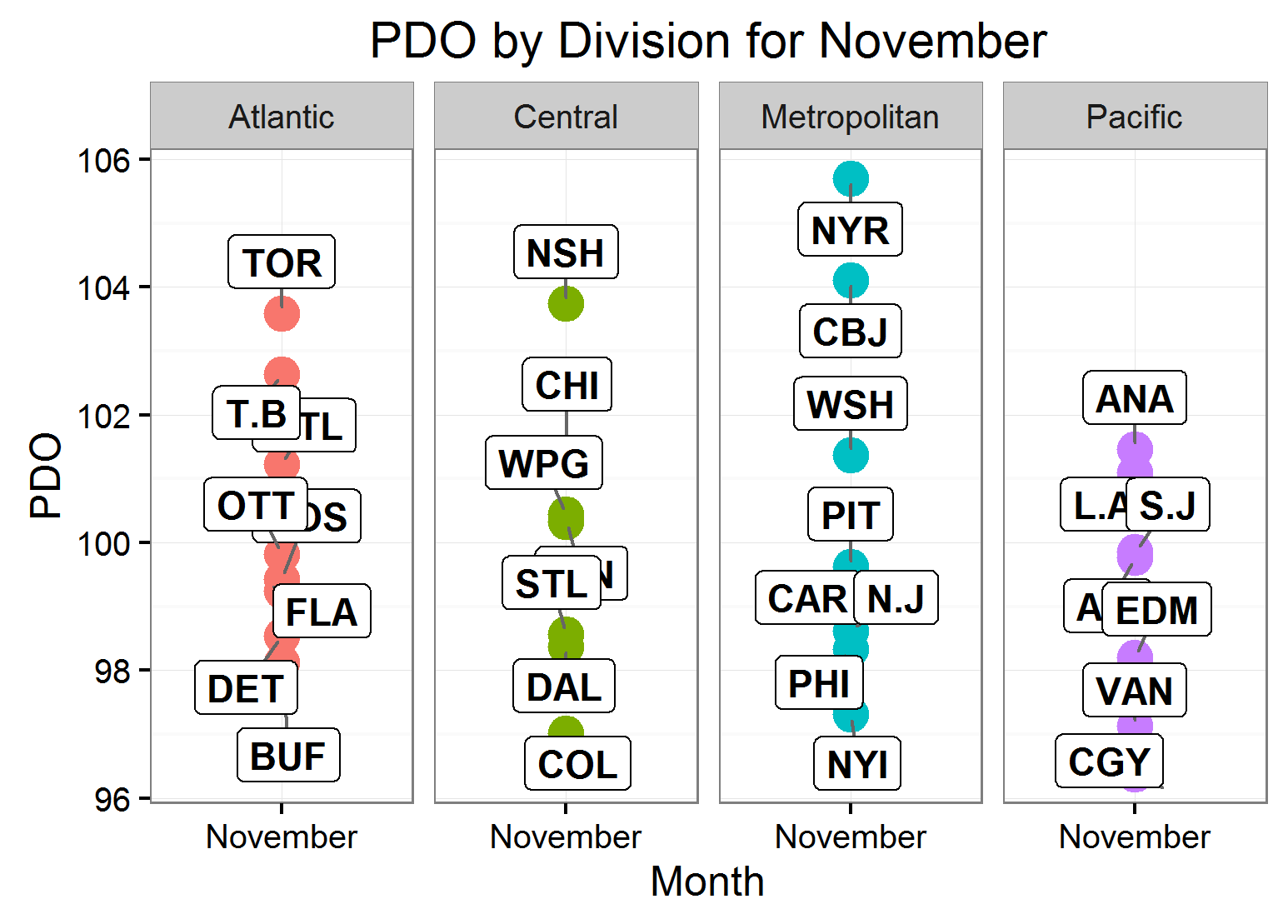 Who Will Regress & Who’s Prepared for Lift-Off?

As highlighted earlier, the Blue Jackets were the perfect storm for a team to drastically improve in the standings. Looking at a teams analytics profile relative to their current point total can help us find which teams are destined for lift-off, and which are likely to regress. 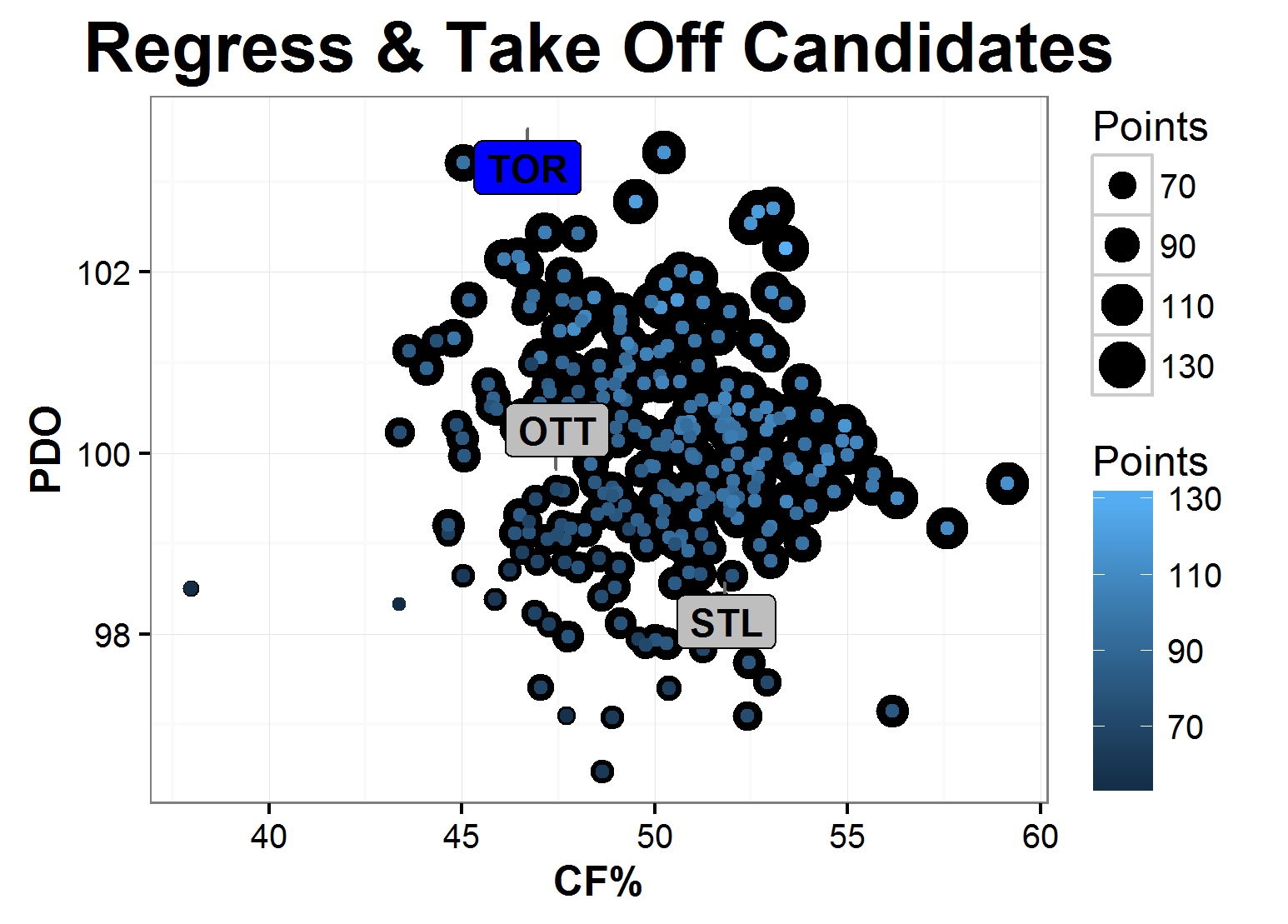 The Ottawa Senators and St. Louis Blues both find themselves amongst the top teams in the NHL in points through November, but both look destined to regress next month.

Neither team has a PDO over 100 for the season which is an early indicator of concern — 100 is the average for PDO, since goals scored for always equals goals allowed across the league.

As for the Blues, this isn’t the first sign of concern when considering their analytics profile. Before the season began, I wrote that the Blues were due to regress this season despite finishing in the top three in points last season. While their regression has yet to happen, it looks as if it could come soon.

This month’s candidate to propel though the standings: the Toronto Maple Leafs.

The Leafs posted a PDO of 103.59 in November, which ranked them amongst the top five teams in the league. Despite a slow 3-4-3 start in October, Toronto showed signs of improvement this past month with a record of 7-5-1.

Given the current standings, the Leafs are on pace for a modest 86 points this season. Despite their current pace, the Leafs’ analytics for the season suggest they are on pace for 94 points. Furthermore, their play in November alone was comparable to a team playing at a 112-point pace.

It’s difficult to imagine any scenario where the Leafs manage to become a 100-plus point team in 2016-2017, but they are due to see a jump in the standings if they can replicate their recent play into December.

Write to codyreiff@email.com. All data in this article is courtesy of Corsica Hockey.