At the end of each month, I will be releasing an analytics report recapping the month and season thus far through the lens of advanced statistics.

As I often highlight, PDO and Corsi For (CF%) are strong predictors of team performance. Using data of every team’s CF% and PDO since the 2007-2008 season we can explain 82% of the variance of each team’s final point total. 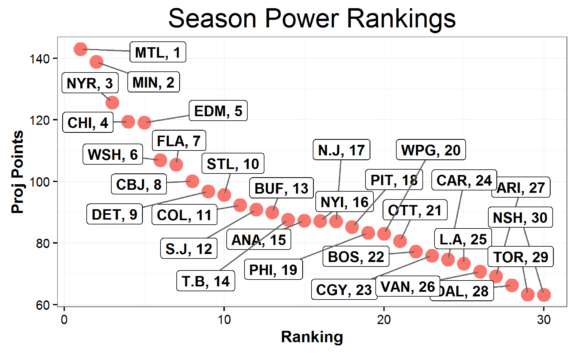 This plot shows each team’s expected point total given their CF% and PDO through October. The purpose of this analysis isn’t to try to predict how many points each team will finish with this season, but evaluate where the teams stack up so far.

It shouldn’t come as much of a surprise to find the Montreal Canadiens at number one given they currently lead the league in points and have yet to lose in regulation. The five teams with the highest expected point total also fall within the top five in PDO.

Below are two plots showing how each team stacks up against the other teams in their division for both CF% and PDO.

The only team leading their division in PDO but not leading in the standings is the New York Rangers. The Rangers had a strong October — recording a PDO of 102.84 and a CF% of 53.65%. They are the only team currently in the top five in the league in both metrics thus far. 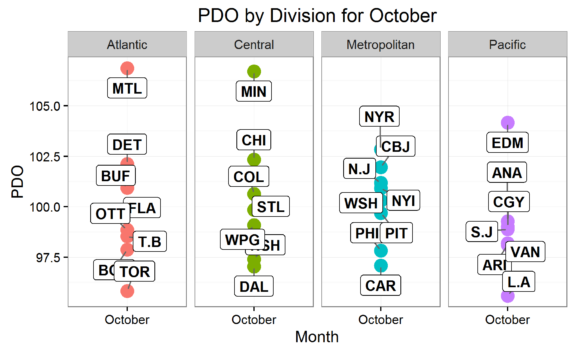 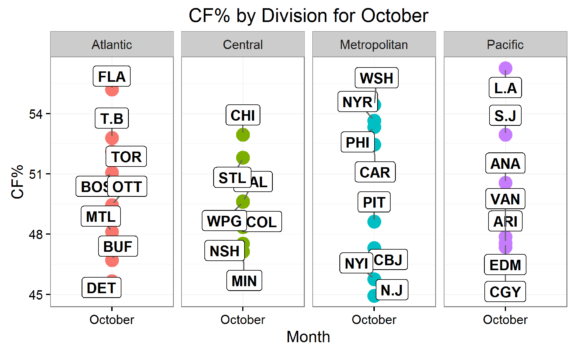 Who Will Regress & Who’s Prepared for Lift-Off?

To find out which teams are most likely to soar and regress, we can look at their current advanced statistics and see how they compare to similar teams since 2007.

The plot below shows how each team has fared given their PDO and CF% over the past nine seasons. The points tend to trend toward the upright corner of the plot — meaning teams with a higher PDO and CF% have generally picked up more points in the standings.

The two teams shown in the plot are this month’s regress and lift off candidates: Pittsburgh and Columbus. 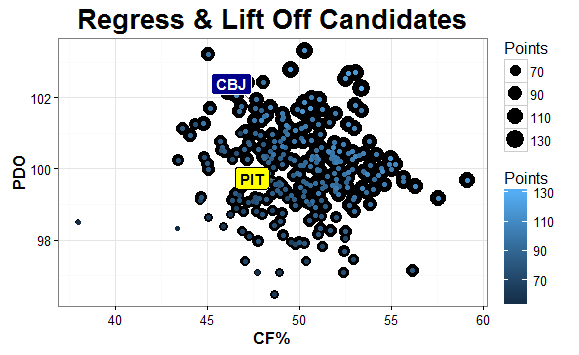 Currently, the Penguins have the largest discrepancy between their rank in the standings and their expected point total. Pittsburgh is 6-2-1 with 13 points, which is good for 1st in the Metropolitan Division and 4th in the NHL. However, the Pens have produced an underwhelming PDO of 99.69 and CF% of 48.62.

All signs indicate they will take a step back from their current first place position, except for the return of Sidney Crosby.

Crosby has played just three of the Penguins’ nine games this season, but the Pens have won all three of his appearances. He’s contributed a stat line of 4-1-5 in his three games, as well as a CF% of 54%.

Although Pens fans had reason to worry, as long as Crosby remains healthy the Penguins should avoid a slip in the standings over the next month.

Despite currently sitting in 7th in the Metropolitan Division and 26th in the league, the Blue Jackets have played relatively well.

The Jackets currently rank 7th in the league in PDO, although their CF% is presently 47.31%. Although these numbers may seem disappointing, teams that have posted similar numbers have finished the season with about 100 points.

Saying the Blue Jackets, who finished 2015-2016 with 76 points, will eclipse the 100 point mark is a bit of a reach. However, they are playing well statistically and should be rewarded in the standings if they continue to maintain their current production.

All data in this article is courtesy of Corsica Hockey.