After a 2-10-1 start to the 2013 campaign, many Washington Capitals fans were all but ready for their team to bomb the season and pray for luck in the draft lottery. After a healthy resurgence and quick adjustments to their new coach, Adam Oates’ system, the Caps sit in first place in the Southeast Division. The boys from the nations capital are looking like the team that won the President’s Trophy in 2009-10.

The Capitals currently stand at 23-17-2, tallying points in 12 of their last 13 games, and posting a 11-1-1 record during that span. They are four points ahead of the Winnipeg Jets for the division lead. Alexander Ovechkin is scorching hot. Mike Green is playing his best hockey in four years. Everything is looking up for the Caps.

With the playoffs looming, let’s look at some power rankings for Capitals players based on importance for the upcoming postseason.

Neuvirth has looked good in his last two outings, notching wins in both games. If Braden Holtby isn’t as hot as he was in the 2011-12 playoffs, the Capitals will heavily rely on Neuvirth to fill Holtby’s shoes.

Oleksy has been a bit of a surprise for the Capitals this year. Unless you follow the Hershey Bears, you likely had no idea who he was. Oleksy is plus-eight on the year and has been a large part of the Capitals success. Let’s hope his lack of playoff experience doesn’t appear visible in the upcoming postseason.

Erskine has been part of the team since they started winning Southeast division crowns. His physicality and blast from the point can provide a huge spark for the Capitals in the playoffs. His gritty play will be needed.

Chimera ranked second on the team in 2011-12 in goals but has only tallied two through 42 games in 2013. He has had his opportunities, but hasn’t been able to light the lamp as much as he’d like. He does provide top-end speed that could lead to a breakaway or washed out icing. Chimera is going to need to step it up and forget about his poor regular season.

Beagle might be the best face-off guy on Washington’s roster. He led the team in face-off percentage during last season’s playoffs. He is going to need to step it up once again.

Hendricks provides grit and grind work that doesn’t go unnoticed by opposing teams. Attempt to hurt any Capitals star, and Hendricks will make you wish you never got involved. He offers a big body presence in front of the net that can disrupt a goalie’s vision. His top-end speed is also a plus.

When Fehr scores a goal, the Capitals are 7-0-0 this season. If this string of success continues in the playoffs, Caps fans should pray for Fehr to score in every postseason game. 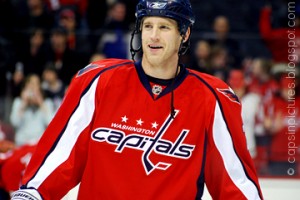 If Laich isn’t healthy enough to play, this information will not be useful. But Laich knows how to win in the postseason and does all the dirty work in front of the net for the Capitals. He has missed the past few games with an injury and has only played in nine of 42 this year. He needs to get healthy fast, as he is a top-six forward for Washington.

Perreault was benched by former head coach Dale Hunter for nearly all of the 2011-12 postseason. He has thrived under Adam Oates and is a deadly threat at center on Washington’s third line. He’s a slick playmaker who can also stick one top shelf if he has the opportunity.

Ward led the Predators in goals during the 2010-11 postseason. It was stellar enough play to earn him a three-year, $9 million contract from the Capitals. He scored the game winner in Game 7 against the Bruins in overtime last year. The Capitals acquired him for the playoffs and are going to need him to step up. 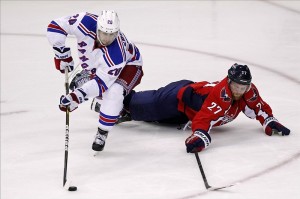 Alzner is the best shut-down d-man the Capitals have on their roster. He will be relied upon heavily to shut down the top players on whichever team the Capitals face in the playoffs. Alzner is the teams unsung hero who does things that don’t show up on the stat sheet, but are easily recognized by the coaching staff.

Johansson has come back from an early season injury to help complement Ovechkin and Backstrom for one of the NHL’s top lines. He didn’t play too well last post season, but will have a great chance to redeem himself if the Capitals continue to soar.

Brouwer is No. 2 on the Capitals with 16 goals this year. He has a spoken leader for the team and has won a Stanley Cup with Chicago in 2009-10. He’s another guy that provides a big body presence in front of the net and he will be relied upon to do all the nasty work on the Capitals power play.

The Capitals traded perhaps their top prospect in exchange for Erat’s services. He has yet to tally a point yet for the Capitals, but is known to get on the stat sheet. He better help prove that George McPhee made the right decision acquiring him at the deadline.

Aside from his superb defensive play, Carlson’s offense could provide a huge spark for the Capitals. He is going to need to step it up like he did for the United States in the World Junior Championships back in 2010.

We saw Mike Green tally nearly 40 goals back in 2008. When the playoffs came, he didn’t score any goals. The question still looms as to whether or not Green can perform in the postseason. If he can continue his play that’s allowed him to score 10 goals this year, the Capitals will get really far in the playoffs.

Perhaps one of the top off-season acquisitions for any team this past summer, Ribeiro ranks third on the team in points and has provided much more than that. His smooth, swift skating often freezes defenders and opens up wonders for other guys on the ice. His play has contributed to Washington’s top ranked power play this year. In recent years, the Capitals power play hasn’t boded well in the playoffs. Maybe Ribeiro can reverse the trend.

Backstrom has recorded more points in the month of April than any player in the NHL. His play has largely contributed to the Capitals 7-0-0 record during the month. He has assisted on nearly all of Ovechkin’s goals this year. He’s going to have to continue to be a top-tier playmaker in the postseason.

Ovechkin leads the league in goals to this point in the regular season after an abysmal start to the year. The Capitals resurgence has coincided with Ovechkin’s blazing hot play. If he’s playing well, the Capitals will be playing well. Their offense runs through number eight. 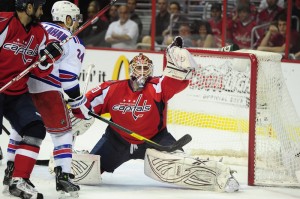 If Holtby is hot and the offense is playing their best, the Capitals will be nearly impossible to beat. It’s as simple as that. A hot Holtby equals a potential Stanley Cup.

Only two of Washington’s upcoming games are on the road. Five of the upcoming six games come against potential playoff hopefuls.