There were several storylines hidden behind the loud collective performance of the top line of Brad Marchand (two goals, three assists), Patrice Bergeron (two goals, one assist) and David Pastrnak (four assists) during the Boston Bruins’ 6-2 victory over the Tampa Bay Lightning in Game 1 of the Eastern Conference Semifinals on Saturday afternoon.

However, two of the main performers for the Bruins on Saturday were two players who have been the centerpieces of criticism lately by the local media in goaltender Tuukka Rask (34 saves) and second line winger Rick Nash (two goals).

Following Wednesday’s Game 7 against the Toronto Maple Leafs, many in the always-harsh Boston media were quick to point the finger at Tuukka Rask and call for his job, despite Boston winning 7-4 and advancing to the next round. Some were more sensible than others, and to be fair, Rask did let in four goals on just 24 shots, so some criticism is definitely warranted when this is the type of performance that your former Vezina Trophy-winning goaltender turns in for an elimination game. However, the calling for Rask’s job and the idea that Anton Khudobin could have been any bit better against the Leafs on Wednesday is downright ridiculous, but that’s a conversation for another time.

On Saturday in Tampa, Rask silenced his critics (for the time being) with an absolutely dominant performance, saving 34 of 36 shots to help the Bruins to the series-opening win. The first goal that Rask allowed to Dan Girardi, a deflected shot from the point, cut the game to 2-1 early in the second period and can hardly be deemed his fault. The second goal, another shot from the point by Mikhail Sergachev at 13:22 of the second period, found its way into the Boston cage when Rask was a sitting duck without a skate blade after making a kick-save on a shot by J.T. Miller 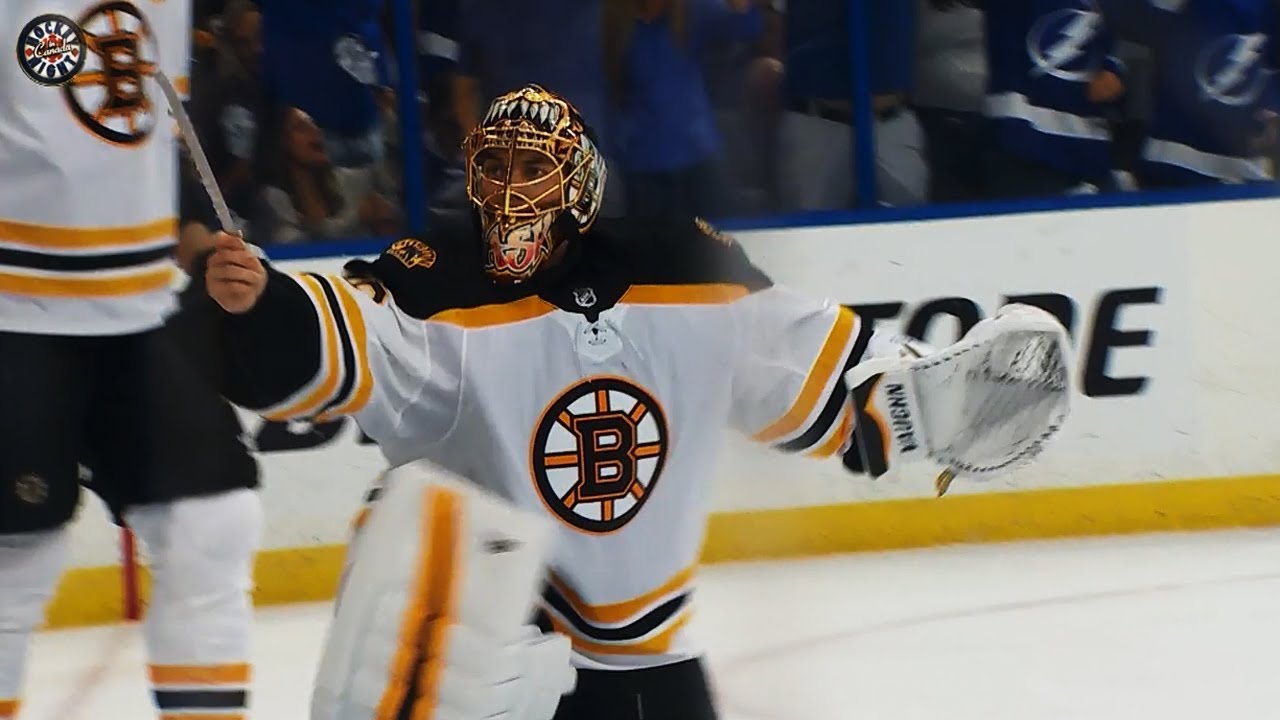 The official on the ice made the correct call by not blowing the play dead, as it is stated in the rule book under section 9.6 that the only type of equipment malfunction that can warrant a whistle is the displacement of a goaltender’s helmet.

Nevertheless, a very tough break for Tuukka Rask and the Bruins. However, following the goal by Sergachev, Rask hunkered down and saved every one of the 13 shots he faced throughout the remainder of the game while his teammates in front of him did their part and opened up the scoring with three unanswered goals in the third period.

Building and Moving Forward for Rask

Performances such as the one Rask had in Tampa on Saturday are obvious confidence boosters not only for Tuukka but for the Bruins as a whole. When your goaltender is turning in 34-40 saves per game against a potent offense such as Tampa’s, it gives the entire team even more reason to believe that they can win and advance to the next round. Rask had been extremely hot and cold throughout this postseason entering Saturday. One night, he’s turning in 31 saves and leading Boston to victory (Game 5 vs. Toronto) along with what Bruins fans witnessed at Amalie Arena on Saturday. Other nights, he’s surrendering four goals on 24 shots in Game 7 against Toronto.

Hopefully, Saturday’s effort allows Rask a pedestal to build upon moving forward and if he does that, the majority of his critics on the radio and in the papers will be forced to eat crow.

The other main storyline of Saturday’s victory over Tampa outside of the goaltending was the sudden arrival of veteran winger Rick Nash.

During and following the seven games against Toronto, many in the Boston media harped on Nash for his lack of offensive production after accumulating just one point throughout the first six games of the series. Nash’s reputation of being a player who produces large in the regular season but not when the spotlights are on in the playoffs has followed him from Columbus to New York, and now to Boston after the B’s acquired him at the deadline. Many were calling for and expecting Nash to have a big series against Toronto, but it never came and throughout the last three days Nash has been getting scorched by the likes of Michael Felger, Joe Haggerty, and the rest of the talking/writing heads in the Boston media that cover the Bruins.

On Saturday, Nash opened the scoring by tipping home a shot from the point by David Pastrnak on the power play. In the second period, Nash scored the would-be game-winning goal by sniping home a wrist shot via the slot off the post and in to give Boston a 3-1 lead. Despite the top line’s absurdly good performance, the Bruins may not be leading this series if it is not for Nash showing up and silencing his critics with a two-goal performance in Game 1.

Building and Moving Forward for Nash

The stereotype labeled on Nash by many in the media that he is not a clutch player is extremely unfair. Could Nash be better in certain aspects? Certainly. Does Nash wish he had played better in past playoff runs with the Rangers? Obviously yes. Does that have anything to do with this year’s postseason run with the Boston Bruins? Absolutely not. Outside of some slight historical significance, Nash’s past postseason failures have little to no meaning when it comes to what he is capable of doing with the Bruins during the remainder of this playoff run.

Nash did not have the best series production-wise in round one against Toronto, but hockey is a weird sport, and anybody who watched Saturday’s Game 1 victory saw just how good of a player Nash can be when the puck bounces his way and when he’s given the correct matchups/minutes. We’ve learned from watching the seven-game series against Toronto that Boston’s top line has the ability to explode at any given moment. However, on nights were Marchand, Bergeron, and Pastrnak are left off the scoresheet, the Bruins need guys on their second and third lines like Nash, David Backes, Danton Heinen, and David Krejci to step up and produce.

Rick Nash and Tuukka Rask both have the reputations of being players who are unable to get the job done in the postseason.

With Rask, it goes back to the 2013 Stanley Cup Final, where he let in two goals in the final minute to lose Game 6 as well as the series to the Chicago Blackhawks. Call that Game 6 loss to Chicago whatever you want – neither goal was really Rask’s fault but that is not how it’s seen the eyes of a lot of Bruins fans and Boston media. The following year, the Presidents’ Trophy-winning Bruins were eliminated by the Montreal Canadiens in the second round (Rask’s Vezina season), and in 2016 Rask didn’t suit up due to illness in a must-win game (6-1 loss) to the Ottawa Senators on the last day of the regular season.

"Throughout my career, it’s always seemed like my goals have come in bunches. … Finally I got rewarded tonight."

🎥Rick Nash and Tuukka Rask speak after jumping out to a 1-0 series lead in Tampa: pic.twitter.com/xCJqvvKuzc

As for Nash, his reputation boils down to what Bruins fans and Boston media have heard/read from the like of Rangers fans and the New York media. Nevertheless, if Nash keeps having performances like this throughout the Tampa series, and Rask keeps the door shut in net like he did in Game 1, then the sky is the limit for Boston in terms of how far they can go into these playoffs.