The second and final meeting between the San Jose Sharks and the Carolina Hurricanes looked nothing like the 1-0 Carolina victory at PNC Center. The goals came in bunches. The goaltending was not stellar for the Hurricanes and San Jose’s Aaron Dell kept on his winning ways. The Hurricanes won the possession battle from the 15:00 mark of the first period and never relinquished it. Despite all three of the Hurricanes’ goals coming on special teams (two power-play tallies and a shorthanded goal), the Sharks’ skilled offense was able to chip away at Cam Ward, who was not sharp in the 4-3 San Jose victory.

The Captain Line needed only 12 seconds to finally get a goal past Cam Ward for the first time this year. Joe Pavelski had a well-positioned tip to spring Joe Thornton and Patrick Marleau two-on-one against Justin Faulk. Thornton put a perfect pass just outside of Faulk’s reach and right where only Marleau could deflect the pass in behind the 32-year-old Carolina netminder.

Less than two minutes later, with Joe Thornton in the penalty box for hooking, Teuvo Teravainen showed his immense skill as he shook off Justin Braun and threaded a pass to Lee Stempniak through Marc-Edouard Vlasic’s skates to tie the game at a goal apiece. The deadlock would quickly be broken as a Paul Martin point shot would deflect off of Carolina defender Brent Pesce’s skate and then past Cam Ward. The Sharks would loosen up their usual system of tight defensive play, and the line of Sebastian Aho, Teravainen, and Stempniak would continue to buzz around the net, and the game would open up.

#SJSharks are allowing themselves to get sucked into playing the Canes loosey goosey style of game. Need to tighten up screws in the second

The second period had a trio of goals that came in quick succession just as they did in the opening frame.

Joakim Nordstrom struck again against the Sharks when he broke in on a partial breakaway after Brent Burns laid out on the ice to try to break up the play. Both of Nordstrom’s goals have come against San Jose. In fact, Nordstrom has three goals in four career games against Team Teal, the most of any team in his career to this point.

On his next shift out after his defensive gaffe tied the game, Burns’ shot from the point would be tipped by Logan Couture, who was right in the face of Cam Ward. The goal would be reviewed to make sure Couture tip was legal, and the goal stood.

Only two more minutes would be needed for the next San Jose goal. Kevin Labanc would get his second goal in as many games, pouncing on the rebound from Dylan DeMelo‘s shot and showing off his quick release for the sellout crowd at SAP Center.

The Sharks would take a 4-2 lead into the locker room despite being outshot 22-14 through 40 minutes.

Early in the third, Sebastian Aho would frustrate defenseman Brenden Dillon, who would take an undisciplined cross-checking penalty on his way to the bench after a spirited but clean battle with the Finnish forward. Carolina would strike again on the power play when Derek Ryan was left all alone in front of Dell and snapped home the man-advantage goal.

The two teams would skate four-on-four as Brent Burns went to the penalty box on a hooking call while Hurricanes leading scorer Jeff Skinner was called for the corresponding embellishment penalty. Skinner was a force throughout the game with 11 shots on goal to lead Carolina, but only had an assist for his efforts to beat San Jose back-up Aaron Dell.

The Sharks finally clamped down on defense for long stretches following the Ryan power-play marker and ultimately survived the Hurricanes for a 4-3 victory despite being outshot by a 33-20 margin. 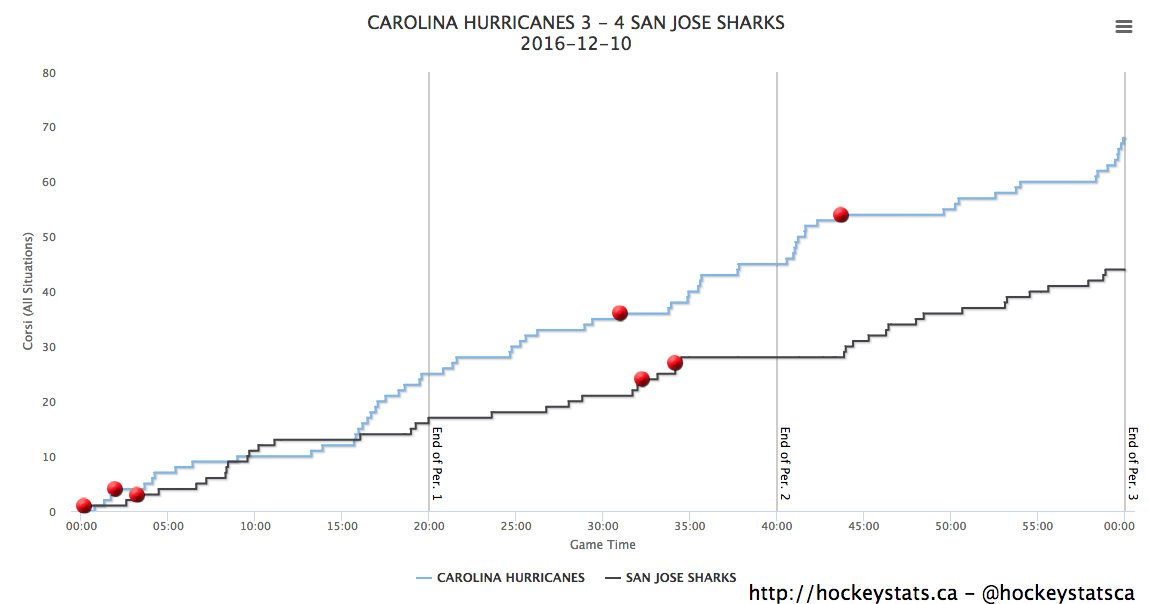