The Prince Albert Raiders, his team, made it into the WHL’s playoffs after a one-game playoff with the Red Deer Rebels. Sure, they lost in the first round, but they did so against the eventual Memorial Cup Champions (the Edmonton Oil Kings). And combined with the attention paid to his teammate Leon Draisaitl, a lot of eyeballs were on Gardiner all year long.

He finished the season ranked 29th among North American skaters by the NHL’s Central Scouting Service and 85th overall by Future Considerations.

Months later, with the preliminary watch list from Central Scouting released – with Gardiner’s name prominent on the list as a B-level player slated for the second or third round of the 2015 Draft – the forward remains focused on improving as a player.

“It was kind of a crappy thing to go through, but it motivated me a lot to work hard in the gym every time over the summer, to work hard on the ice every time,” said Gardiner of the disappointment of not getting drafted last summer. “Coming in [to this season], I had a chip on my shoulder and I wouldn’t say I wanted to prove some people wrong, but I just wanted to come in and work hard and things are going my way so far.”

The drafting of over-age players – guys who have gone through the draft once or twice prior – isn’t new, but it’s something that has become more common-place in recent years. Here’s a quick glance at some of the older players chosen in the 2014 Draft (Courtesy Hockey Reference). 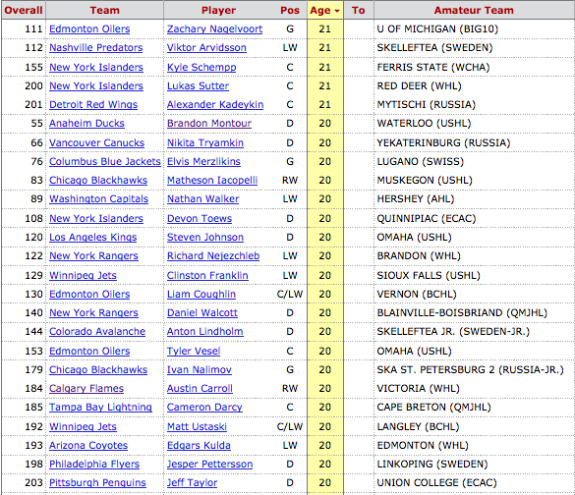 And this isn’t an exhaustive list. These are just the most senior of the over-age players selected in 2014.

Here’s the same list for the 2013 Draft (also via Hockey Reference): 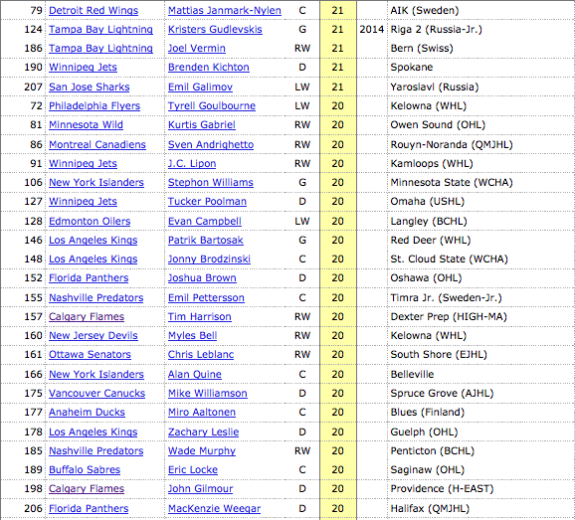 The 2012 Draft featured over-ager Tanner Pearson getting selected in the first round after being over-looked in the 2011 edition. Many other older prospects have been selected in recent years in the higher rounds. Gardiner noted that much of the advice he received following the draft snub was to remain focused and often pointed to players that made it to the NHL despite similar hardships.

“I think a few guys just said look at some of the guys in the NHL like Jamie Benn who were picked pretty late or not picked at all, and they’ve gone on to have successful NHL careers,” said Gardiner. “You know, the draft is not the be-all, end-all and I just think coming into this year, a lot of people are saying a lot of things to me, but I just wanted to go about and do my own way.”

The NHL Draft is no longer strictly the domain of the 18-year-olds of the hockey world. As for Gardiner, he’s approaching the remainder of the season with a simple, straight-forward attitude.

“I just want to keep pushing the pace every time I go to the gym or go to the rink, and keep having fun every day.”