At the conclusion of Wednesday’s game you watched as Nashville Predators’ captain Shea Weber slammed Henrik Zetterberg’s face into the glass. You witnessed a beloved and exceptional talent become the victim of a dangerous, gutless, and shameful act. You were understandably outraged by the incident. Concerned for the well-being of a key player to your team’s playoff advancement, you decried Weber’s actions as having no place in hockey. The assessment was valid. They don’t.

The insults and jeers sent Weber’s way immediately following the incident were, for the most part, acceptable. The assertion that the Preds’ leader was dirty, a disgrace, and the scum of the earth was expected. In that moment, he was.

The consensus of the hockey community seemed to be that Weber should receive a 1 game suspension for his reckless behavior (although some Red Wings fans were unrealistically calling for a series ban). When it was announced Thursday afternoon that he would go punished by only a $2,500 fine, again you were understandably upset. So was I.

Yet your outlet of those emotions, and the level of pure hatred you have expressed in the wake of the ruling is completely unacceptable. You have stooped to levels far lower than the incident you yourselves claim was so egregious in nature. It’s not just a small sect of you either. It seems to be the overwhelming majority, and that must change.

The number of online posts calling for retaliation is perhaps the most alarming. From message board discussions to meme creations, it has gotten out of hand. These posts aren’t merely calling for solid hits or perhaps a fight to take place. They wish great bodily injury upon Nashville Predators players, something I fail to understand.

From posts suggesting that Jonathan Ericsson should return the favor by slamming Alexander Radulov’s head into the board, to posts suggesting Todd Bertuzzi should recreate the infamous Steve Moore incident. It’s disgusting, and it must stop. 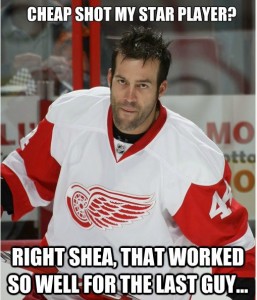 It is that last suggestion that gets me the most. You have welcomed Todd Bertuzzi to your team. You’ve watched him change as a player. You’ve seen the man behind the actions, and you’ve learned to forgive him for a momentary lapse in judgement. You’ve grown so akin to him that you’ll vehemently defend him from others. You know that choice in his past still haunts him today. My question is, where is the consistency?

If you can forgive Todd Bertuzzi for his actions, surely you can forgive Shea Weber for his? If you know Bertuzzi is better than his past, why would you suggest he return to it? It flat-out doesn’t make any sense.

As Red Wings fans we like to pride ourselves on the class and excellence of our team. None in the league are more respected than Nicklas Lidstrom and Pavel Datsyuk. The players themselves have made this clear in the results of player polls conducted this season. Yet those very same attributes we brag about our team possessing, today we do not exemplify.

To accuse someone of being the worst kind of human for their actions and then suggest that your own team should commit the same error in judgement is both hypocritical and lunatic. To bring up a situation from the past that you often defend a player for and urge that it happen again is more shameful and disgraceful than words are capable of expressing.

To be upset at Shea Weber’s stupidity and the NHL’s ensuing decision is one thing, but this has long ago crossed the line from upset to raving insanity. To wish harm upon a player is disgusting and has no place in the Red Wings community. The answer to the situation is not revenge, and whether you like it or not it wont be answered in that way. Detroit is far above that kind of lack of discipline.

Whether you want to believe it or not, Shea Weber is not the worst human being to grace the face of the earth. He’s a hockey player who reacted strongly in the heat of the moment. Do I think he deserved a suspension? Absolutely. But what’s done is done. The league has made its ruling and there is no changing that. We can have civilized discussions about why that decision was wrong, but to suggest player retribution, or more realistically, encourage it, is wrong.

That is why we wanted the suspension in the first place, is it not? To signify that such actions were not okay, so that they don’t happen again?

Furthermore to get upset enough to turn on one of your own former heroes because he ruled in a way you didn’t agree with is a slap in the face to everything the Red Wings organization is supposed to be about. Yet it’s happening. Droves of Red Wings fans are disowning Brendan Shanahan for not laying down the law in a manner they feel appropriate. Even the promoters of all things Detroit and its heritage, popular clothing design business Down With Detroit, had the audacity to suggest the creation of a shirt reading “Ban Shanahan” (thankfully they thought better of it after fan input). The man won 3 Stanley Cups here, and you’re ready to sail him down river because of one ruling? Ridiculous.

You’re out of line, Hockeytown. You look foolish, hypocritical, and insane. I understand passion, but you must keep it in check. You must emulate your team on the ice in classy behavior, and you must rise above such childish rhetoric.

18 thoughts on “Red Wings Fans, You’re Out Of Line”