Originally drafted 21st overall in the 2010 NHL Draft, Riley Sheahan is in a position to have a breakout offensive season for the Detroit Red Wings in 2016-17.

Sheahan scored a career-high 14 goals last season after coming on late in the year. In his last 22 games, he recorded seven goals and 12 points to go alongside a plus-8 rating.

Across a full 82-game season, those numbers translate to 26 goals and 44 points, which would again establish a new career in each category. While 26 goals is unlikely, Sheahan posting 44 points is certainly achievable.

Fans certainly expected the 6-foot-3, 222-pound forward to begin utilizing his size and start playing a power forward’s game in 2014-15. Over the course of a full season, Sheahan’s scoring pace dropped, but he still built on his rookie year with 13 goals and 36 points in 79 games.

In June, Sheahan signed a two-year bridge contract worth an annual $2.075 million. The deal gives Sheahan incentive—the ultimate reason for a bridge contact—to take the next step in his career and establish himself as a future piece of the Red Wings. Sheahan has shown solid offensive upside with some slick goals last season. 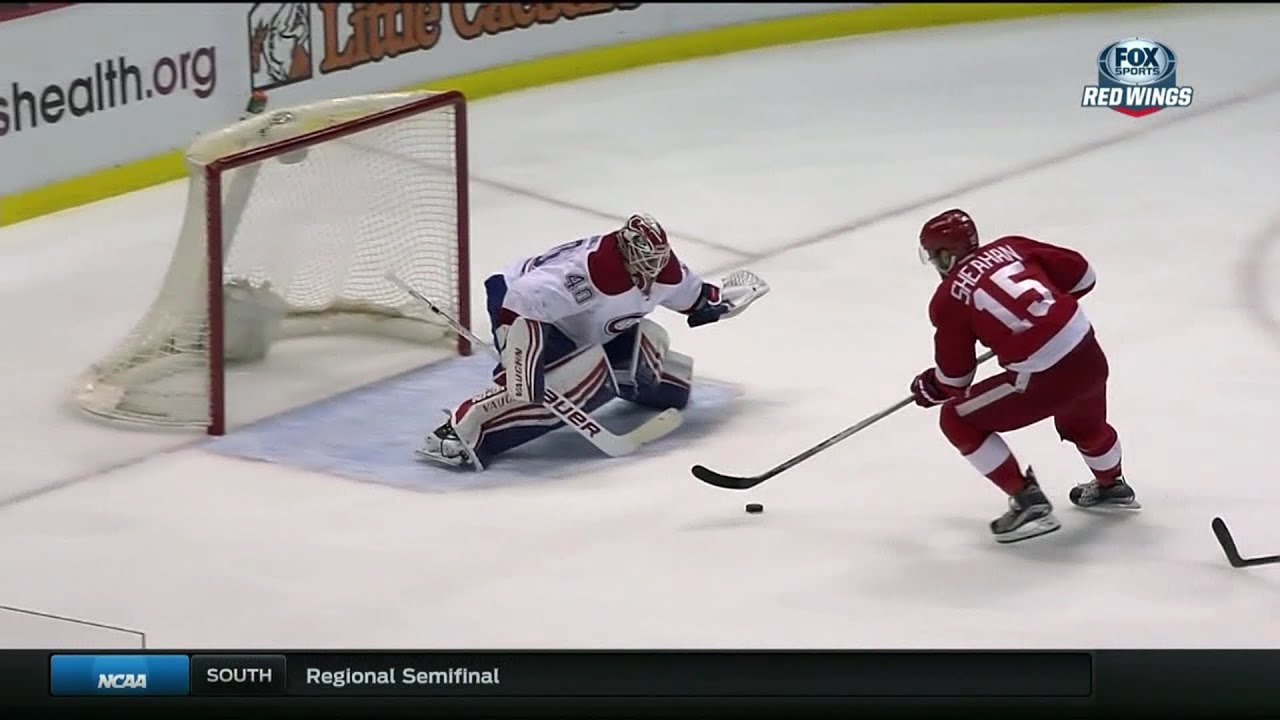 Recently, I outlined the need for the Red Wings to sort through their center depth, having eight natural centers signed ahead of October. In doing so, I pegged Sheahan as the likely third line center.

The biggest threat to Sheahan’s roster spot is fan-favorite Andreas Athanasiou. With his speed, stickhandling and tenacity, Athanasiou is a real threat to take over Sheahan’s center role.

With 15 forwards under contract, Ken Holland will seemingly operate from an area of depth and strength to bring in much-needed defensive help. But if a trade doesn’t come by October 13th, Athanasiou’s waiver-exempt status could leave him in Grand Rapids to start the season.

Since his offensive game hasn’t blossomed enough to break into the top-six, and Luke Glendening’s four-year extension sets him as the fourth line center until 2021, Sheahan is best used as a two-way center on the third line.

A breakout offensive season becomes even likelier for Sheahan with an increase in linemate quality. Going back to the aforementioned surplus of forwards, the Red Wings are operating with more depth than they had last season.

Sheahan is fixed to play with one or two of Darren Helm, Tomas Tatar, Gustav Nyquist, Andreas Athanasiou and newcomer Thomas Vanek.

While Helm’s highest point total is 33, the latter four options can bring real offense to Sheahan’s wing. Tatar and Nyquist have established chemistry with Sheahan from winning a Calder Cup together in 2013 to semi-regular time together in Detroit.

Athanasiou, 21, quickly gained love and trust from Hockeytown this season, but not so much with Jeff Blashill and the coaching staff. He was regularly sheltered, averaging just 9:01 per game regardless of his offensive upside.

Vanek, a four-time 30-goal scorer, signed a one-year deal in Detroit after posting career lows in goals and points last season. Used as a spare part in Minnesota, Holland believes he has “a motivated athlete” on a low-risk, high-reward contract.

Sitting below Tatar, Nyquist, Dylan Larkin, Frans Nielsen, Henrik Zetterberg and Justin Abdelkader on the depth chart, Vanek will most likely start with third line minutes, easily the best offensive threat Sheahan will have spent regular time with in his career.