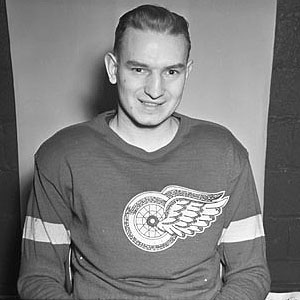 The 1942 Stanley Cup Final between the Toronto Maple Leafs and the Detroit Red Wings was the first Cup Final in NHL history to go to a seventh and deciding game. After losing the first three games, the Maple Leafs won the next four to win the series 4–3, a feat that has never been matched in finals history. Being on the winning squad brought fame for many Maple Leaf players.  During that time, many NHL players made the difficult decision to put their careers on hold in order to serve their country during World War 2 against their team’s wishes. With all of the success that followed the Maple Leafs and their players over the next twenty five years some of the players from the losing Red Wings squad have been forgotten but Roy “Gus” Giesebrecht should not be one of them.

Up until the time of his death in 2006, Gus was the last living member of that 1942 Red Wings squad.  He was also the only one of the five Giesebrecht boys to make it to the NHL as well as being the only player to have ever made it to the NHL having been raised in Petawawa, Ontario.  All five of the Giesebrecht boys played professional hockey in the 1930’s and 1940’s mainly in the QSHL, AHL and USHL but Gus; the oldest boy of the family was the only one to have a career in the NHL.  As a 15 year old, Gus’ sister was living in Ottawa so he moved down to the Ottawa area and played juniors there where he was scouted by the Detroit Red Wings.  He spent two years developing with the EHL’s Pittsburgh Yellow Jackets and the Detroit Pontiacs of the MOHL  before turning pro in 1938 playing for the Pittsburgh Hornets.  Half way into the 1938-1939 season he was called up and was lucky enough to score his first NHL goal in his first game against the Rangers in New York.  Before his rookie season was over he also scored his one and only NHL hat trick.  As part of a formidable line with Syd Howe and Hank Kilrea, Gus played a total of 135 games between 1938 and 1942 scoring 27 goals and 51 assists.  During his rookie season Gus finished third in Calder trophy voting behind winner Frank Brimsek and runner up Roy Conacher despite the venerable Conn Smythe insisting that he was the best rookie in the league and should have won.

Reaching the finals against the Maple Leafs 41-42 was the highlight of his career, the result of the series not so much.  Gus’ Red Wings finished in 4th and Toronto finished 1st; remember this was the six team era.  The underdog Red Wings beat the Canadiens and Bruins to reach the finals.  “We were actually within seven minutes of winning the cup before Toronto turned it around on us. At that point in the series we were supposed to steal it from them but we were so frustrated that we couldn’t finish it off.”  Following the season, Giesebrecht made the difficult but honourable decision and entered the military where he remained for the next five years.  Upon his return from War Giesebrecht actually turned down general manager Jack Adams’ offer to return to the Red Wings in favour of playing senior hockey for the QSHL Ottawa Senators and working for the family business which he eventually took over after his father died in 1952.  “At that point I wasn’t in shape to play in the NHL and I had the family business to run, the money in the NHL at that time wasn’t all too good either.”  Yes hockey fans, there was a time where it was easier to earn a good living in a regular job rather than playing in the NHL!  “As much as I wanted to win the Stanley Cup even after we got so close against the Leaf’s I figured it was my duty to serve my country first and that my hockey career could wait.”  Unfortunately for Giesebrecht the NHL didn’t wait for him and his Red Wings avenged their game seven loss and won the Stanley Cup in 1943.

Over the years Gus remained in touch with the Red Wings organization through a close personal friendship with long time team executive and Hall of Famer Jim Devellano.  Despite many people’s opinion that Wayne Gretzky was the greatest hockey player to have played the game, Giesebrecht thought that honour belonged to Bobby Orr and he considered Jean Beliveau to be hockey’s greatest ambassador.

Larry Berman is a Hockey History Correspondent for TheHockeyWriters.com. His work has also been featured in The Hockey Hall of Fame Legends Program, The Hockey News, Beckett Hockey Monthly, Canadianhockeyonline.ca and Canadian Sports Magazine. He was inspired to follow the Ottawa Senators by his Grandfather who grew up in Montreal and was a fan of the original Senators franchise. He is also an avid hockey card and memorabilia collector.