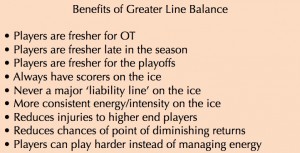 DeBoer is a big advocate of using his entire roster. He said he wanted to roll four lines and three defense pairs. While it took him a while to carry out this strategy, he did. He rolled four lines and three defense pairs for most of the second half of the season. It worked. The benefits include keeping players healthier and fresher over the course of a game and over the course of a season. It is the right strategy for the long haul. It was the perfect strategy for this Sharks team. It no longer is.

In the postseason, DeBoer has continued to deploy his players similarly to the regular season. In the playoffs, there is a bit more total ice time due to the nature of overtime games (five skaters instead of three and sudden death instead of the five minute limit). The added ice time is about four percent for San Jose, courtesy of the triple overtime game against Nashville in Rd. 2. This equates to about 45 seconds per 20 minutes of ice time.

Looking at the ice time differentials from the regular season to the playoffs, it is clear that DeBoer has made few only modest changes in ice time distribution. The change that stands out the most is Patrick Marleau, down over two minutes per night. But even here, the difference is less than meets the eye. DeBoer began cutting back on Marleau’s minutes in the regular season. In the season’s first 20 games, Marleau exceeded 20 minutes of ice time on nine occasions, in the last 20 games, just once.

Most other notable ice time changes come with straightforward explanations. The increased use of Tomas Hertl comes with his move to the top line. Logan Couture’s injuries in the early portions of the season required an extended period of modest ice time as he worked himself back into game shape. With Couture’s return to the lineup and steadily improved health, Joel Ward’s minutes reduced. All three players are actually close to their usage in the second half of the regular season. Perhaps the most surprising change is Brent Burns, who is averaging less ice time than in the regular season.

After doing such good work keeping the ice time balanced in the regular season and deep into the playoffs, it is time for DeBoer to scrap this perfect strategy.

Defensemen Roman Polak and Brenden Dillon can not keep up with Pittsburgh’s speed, they are liabilities and it is difficult to defend their current use in this series. Those 15+ minutes a night they are playing now? It is down a little bit from the regular season. It needs to be down a lot. Cut these guys back to 10 minutes or less. Pick their spots to limit their liability. Use them against fourth lines and third defensive pairs. Both have been good on the penalty kill and they’ll be plenty fresh for those critical minutes. The penalty kill doesn’t require much in the way of puck handling or controlled exits from the defensive zone, thus avoiding their crucial weakness. On the penalty kill, just get the puck and fire it down the ice. Perfect fit for them. I’d still consider moving Dylan DeMelo or Matt Tennyson into Polak’s spot because Polak and Dillon share the same weakness and the Penguins know how to exploit it. But if DeBoer isn’t going to change the pairing, he can use them a bunch less and in smarter ways. Meanwhile, Vlasic, Braun and Martin need to get up around 23-26 minutes a night. Burns can head up to 28-30+.

The fourth forward line can be cut back to a couple of shifts per period and the penalty kill. Six minutes a night. That leaves 18 minutes per player for the top three lines. It is very manageable in regulation and probably not an issue unless there are multiple overtimes. The Sharks fourth line players are pretty good at the penalty kill, so that is also a good fit.

What was the right strategy for the long haul no longer applies because there is no long haul left. It’s the kick to the finish. There are between two and five games left in the season. When it comes to things like travel and rest between games, San Jose has had a much easier schedule in the playoffs than they had during the regular season. It is no longer about anything ‘down the road,’ it is entirely about the present. It is about what each player can give on this shift, in this period and during this game. It is time for DeBoer to stop the rolling four lines and three defense pairs and concentrate the minutes among his best players.

For most of the season DeBoer’s approach of rolling four lines and three defense pairs was the perfect strategy. It no longer is.

I want to note the passing of Muhammad Ali. I was born after the end of Jackie Robinson’s professional career, making Ali the most influential athlete of my lifetime. As an athlete, he was remarkable and unique. Athletic success gave him a public platform for his social conscience. He was willing to risk years in jail as an objector to the Vietnam War. As controversial as he was, time has borne out what he stood for. In later years, as Parkinson’s Disease robbed him of his ability to communicate, it created a new focus on the potential dangers of boxing, especially neurological problems resulting from hits to the head. Lessons the NHL has been shockingly slow to learn. I’m not expert enough to know, but many consider him to be the greatest boxer ever. He transcended the boundary of sport and his contributions to societies around the world made him one of the most important individuals of the last 50 years.