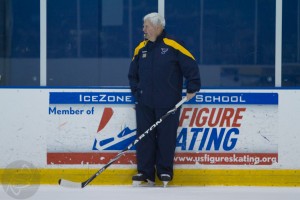 Hitchcock has shuffled the lines throughout the season, but not to a large extent (TSN Photography)

Former Head Coach Andy Murray was run out of town for shuffling the Blues’ lines too much as it was believed that he was throwing a wrench in the team’s chemistry.

All season long, Hitchcock has stuck to his guns and, for the most part, kept his lines intact.  The team’s top line from a season ago, which consisted of T.J. Oshie, David Backes and David Perron, was thrown back on the ice this season and stayed together through most of the team’s horrendous 0-3-1 home-stand in early February.  The line combined for just three goals and three assists while posting a minus-7 in the four-game stand, which Hitchcock appropriately coined “the home-stand from hell.”

The line wasn’t cutting it.  Since the start of February, the Blues have lost four key forwards to injuries (Vladimir Tarasenko, Andy McDonald, Alex Steen and Jamie Langenbrunner), while posting a measly 5-7-2 record from February 1 to March 5.  They also scored just eight goals in six games, including two shutouts, heading into Los Angeles Tuesday night.  Changes needed to be made to get the team gelling offensively again. 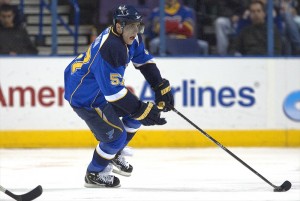 The struggling Blues went into The City of Angels winning only once in their last four games.  Hitchcock rolled out the same lines he put together that earned the Blues a 4-2 victory over the Edmonton Oilers last Friday.  Rookie Jaden Schwartz slid to the top line with Backes and Oshie, while Perron moved to the second line with arguably the Blues’ best forwards this season, Patrik Berglund and Chris Stewart.

The lines seemed to click through two periods.  The St. Louis team took a 4-2 lead to the locker room, striking vengeance on the team that ended their playoff hopes last May.  The Berglund line was particularly hitting a stride, as all three players combined for two goals and three assists.

The third period was quite the different story.  The King scored three goals in 4:36 early in the period en route to a 6-4 comeback victory.  The Blues were also outshot in the period, 15-4.

Despite the gut-wrenching loss, Hitchcock stuck with it.  He placed rookie goalie Jake Allen in goal and shook up the defense, but he kept the forward lines the same.  The team responded well as the second line proved to be the team’s top line.

The Blues will likely head into San Jose Saturday afternoon with the same lineup.  The Berglund line has been the driving force behind a rejuvenated Blues offense, who has posted 10 goals in the past two games against teams that were ranked in the top-five in lowest goals-against last season.

Hitchcock did shuffle the lines, but he has stuck to a formula that works; make the necessary changes and let the team find the chemistry themselves.