When last we examined the “State of the Union” for the New Jersey Devils, they were riding high and perched atop the Eastern Conference standings.  No team was hotter, save for the seemingly indestructible Chicago Blackhawks.  Alas, the Devils were not immune to the plight of the injury ninja.  Specifically one to the back of Martin Brodeur, along with the wrist of a guy who I believe is the most underrated Devil in Dainius Zubrus.

As a reference point, the 1995 Devils were 9-11-4 (22 points) at the midway mark.  So this group is ahead of their Stanley Cup winning fore bearers in that regard.  So while New Jersey is just 3-7-2 (8 points) in their last 12 contests, after an 8-1-3 (19 points) start in their first 12, they still appear to be displaying that “character” General Manager Lou Lamoriello spoke of, in their 3-2 comeback victory in a shootout, over the Buffalo Sabres.

Conversely on defence, the Devils penalty kill has slipped to 22nd, at 78.8%.  Although the club does rank atop the NHL in netting short handed goals, tallying six on the campaign.  New Jersey has also remained steadfast in limiting shots on goal, raking third at 25.7 per contest.

Pacing the squad in points is Patrik Elias.  On the year, Elias has 24 points in as many games and ranks tied for eleventh in the NHL in helpers, dishing out 17.  Elias also boasts a team leading +/- rating of +6.

Another pleasant addition has been that of Andrei Loktionov.  Since joining the Devils from the Los Angeles Kings and being recalled from the AHL Albany Devils, Loktionov has sported three goals and two assists in nine games thus far.

Speaking of pleasant surprises, Steve Bernier has six goals on the year and is third on the team in hits, totaling 35.  Plus his line-mate Stephen Gionta continues to lead the club in hits with 43 on the campaign.

Also on a tear of late is Adam Henrique.  Henrique has posted three goals in his last five games, including two of the short handed variety.  On the full season, Henrique has seven goals and three assists and like I mentioned, has been a terror on the penalty kill of late.

While their continued hustle and all around play may not always show up in the box score, I’m sure the Devils would like to see Travis Zajac, Ilya Kovalchuk and David Clarkson put the puck in the net with more frequency.  Although Clarkson still tops the team in goals (ten) and shots (89), he has just one marker in his last 12.  Kovalchuk has seven goals and 84 shots and while the Devils are desperate for a scoring punch, perhaps “less is more” with Ilya, as he ranks eleventh in the NHL in ice time, clocking in at 25:45 per contest.  As for Zajac, he’s been New Jersey’s best on draws and solid defensively but he needs to build on those four goals.

On defence, perhaps the most steady is Andy Greene.  Greene ranks second among Devils defencemen in points with nine and blocked shots with 43.

Marek Zidlicky has picked up  the pace offensively on the New Jersey blue line.  Zidlicky leads all Devils d-men in points with ten, shots (55) and hits (28).  Zidlicky has three goals on the year, including a recent two-goal effort at the Toronto Maple Leafs. 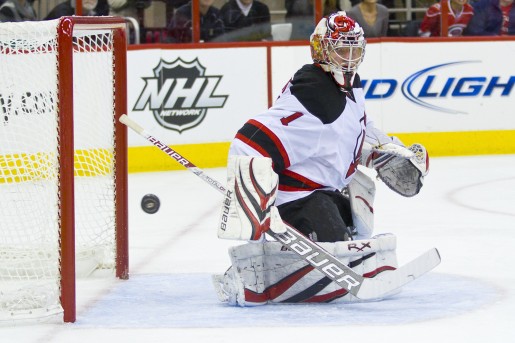 In net there are multiple ways to evaluate Johan Hedberg.  For one thing, “Moose” has a save percentage under .900 (.885).  Conversely the Devils have notched three-goals just once in regulation (a 4-3 shootout loss at Buffalo) since Hedberg took over the reins for an injured Brodeur.  Has Hedberg let in a few softies along the way?  A home game against the Winnipeg Jets and a road tilt at Toronto come to mind.  Yet it could just be an instance where the team is pressing without Brodeur.

Going forward the Devils have an even split of games at home and away.  It may be a second half which sees the Devils acquire a center who can setup Kovalchuk and is strong at the face-off dot.  Also coming down the pike could be another impact defenceman to shake things up.  If past is prologue, I can see the Devils character embracing their favorite character of all, that of a rugged underdog.