Though it establishes what has to be considered the most abysmal moniker in all of professional sports, the NHL’s new Metropolitan Division (hard to say it with a straight face, isn’t it?) will surely produce, maintain and intensify both new and existing rivalries between some of the league’s most exciting clubs.  While supporters of these newly aligned teams attempt to solve the mystery of how or why Gary Bettman et al settled on that title to encompass half of the Eastern Conference, fans can at least take comfort in knowing they’re likely to witness some incredibly entertaining hockey as these squads continue to cultivate and build upon their distaste for one another.

That’s because the league kept what was the Atlantic Division – the Devils, Flyers, Islanders, Penguins and Rangers – together while adding the Blue Jackets, Capitals and Hurricanes to the mix.  As a result, Pens’ fans in particular can still look forward to a heated intra-divisional rivalry with Philadelphia, Ray Shero will still be wishing the Islanders had moved to the Western Conference instead of Brooklyn (eventually) and Dan Bylsma and the rest of the Penguins will have three more formidable foes to worry about just a little bit more:

While the Hurricanes and Penguins don’t have much of a history with one another, there’s certainly enough there to build the foundation for a rivalry.  For starters, the 2012 NHL Entry Draft in Pittsburgh saw a dramatic trade take place in which part of the local club’s nucleus, Jordan Staal, was dealt to the Hurricanes in exchange for Brandon Sutter, Brian Dumoulin and the eighth overall selection.  And while there doesn’t seem to be all that much animosity over the deal, the swap provides the two clubs with a sense of familiarity for each other that can only grow from here on out.

In addition to the trade, the two squads met in a memorable 2009 Eastern Conference Final (for the Penguins, at least) that saw Evgeni Malkin almost single-handedly propel the Penguins to their second straight Finals appearance and their first Cup since 1992.  Without question, the memory must have left a sour taste in the Hurricanes’ collective mouths, something that surely haunts them anytime they see the replay of Geno putting his stamp on the series:

While the Hurricanes haven’t found a great deal of success in recent years, they are one of only two organizations (with the other being the Penguins) from the newly formed Metropolitan Division to capture the Stanley Cup since the 2004-’05 lockout.  And while last year saw the Canes miss out on the playoffs, one has to wonder how the club would have fared had it not been crippled by the injury bug.  Sure the team was atrocious in its own end and lacked the depth players truly needed to be successful but all wasn’t completely lost until until a rash of injuries plagued the squad and, in particular, Cam Ward was lost for the season in early March.

The coming season will see the Carolina faithful hoping for more than just a gimmick that showcases three siblings on the ice together as another campaign winds down.  For that to happen and for the Hurricanes to make a run at the playoffs, the team will need Cam Ward to bounce back strong from his knee injury and stay healthy in 2013-’14.  He’ll need to be sharp, as only Florida gave up more goals than the Hurricanes last year.  While the squad’s most prominent weak link can still be found within the defensive unit, Justin Faulk is quickly developing into a solid number one defenseman in the NHL.  Meanwhile, if everyone can stay healthy, Carolina should be able to count on the likes of Eric and Jordan Staal, Alexander Semin and Jeff Skinner to lead an attack that could potentially rival that of almost anyone.

Given that Columbus is coming over from the Western Conference, the Penguins and Blue Jackets don’t share much of a history with one another.  With the two cities a mere three hours apart, though, that’s likely to change fairly quickly now that the clubs are in the same division.  So what can Pittsburgh fans expect now that they’re going to be seeing more of their neighbors to the west?

Sergei Bobrovsky hopes to follow up his Vezina campaign by making some noise in the NHL’s new Metropolitan Division. (Rob Grabowski-USA TODAY Sports)

Despite the fact that the Jackets haven’t found much success in their relatively brief existence (the club has yet to win so much as a playoff game, let alone a series), they aren’t the pushovers they once were.  In fact, last season saw Sergei Bobrovsky take advantage of his exodus from the circus that is the Philadelphia crease as he simultaneously captured the Vezina Trophy as the league’s top goaltender and nearly dragged the Blue Jackets into the postseason.  Though Minnesota outlasted Columbus for the eighth and final playoff berth thanks to a tiebreaker, the Jackets proved they can’t be taken lightly anymore.

Moving forward, Columbus has much to be excited about.  Yes, Bobrovsky, represents a solid foundation in net but there’s more than that.  The Jackets are hoping Jack Johnson can continue to blossom into the defenseman the Hurricanes envisioned when they drafted him third overall in 2005; they’d also love to see Marian Gaborik continue to flourish after escaping John Tortorella and the Big Apple.  And while Columbus doesn’t possess as much star power as other teams in the division, they are able to rely on hard work and character guys to remain competitive.  What’s more, once the Blue Jackets’ newest acquisition, Nathan Horton, recovers from shoulder surgery, he’ll bring his clutch reputation and winning pedigree from Boston to an organization that’s virtually always been starved for that missing piece of the puzzle.  Once all that comes together, Columbus could prove to be a thorn in a lot of opponent’s sides.

Without a doubt, this is the “new” club that Penguins’ fans are most familiar with.  Indeed, going back to their old Patrick Division days in which the squads seemed to meet almost every year in the playoffs, the two teams share quite a history.  And while divisional realignment and a falling on hard times for both organizations temporarily put a damper on the rivalry, the intensity came back in full force with the arrival of Sidney Crosby and Alexander Ovechkin.  Since the two stars burst onto the scene in 2005, that rivalry has ebbed from the highs of one of the most exciting playoff series in recent memory and the wildly successful HBO series, “24/7”, to the lows of one star player being plagued with injuries while the other endured attacks over his perceived lack of character and heart.  Now that the Penguins and Capitals share a home within the Metropolitan Division, though, one can only assume that what is already one of the NHL’s greatest rivalries can only grow from here on out. 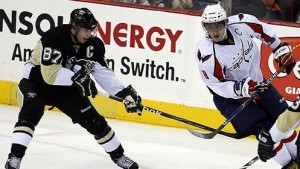 The Crosby-Ovechkin rivalry will surely intensify now that the two of them reside within the same division. (wstera2/Flickr)

While the Alexander Ovechkin era has provided Washington with a great deal of excitement and an equal amount of regular season success, not much of it has translated into the postseason.  In fact, the Caps haven’t advanced beyond the second round since “Ovie” arrived in town.  And while things seemed to hit an all-time low for Ovechkin as he struggled to adjust to playing on the right wing in the early stages of last year, the Capitals’ captain was able to emphatically rebound as he led Washington to yet another division title in route to capturing his third Hart Trophy since 2008.

It’s no secret the Capitals have been and have the potential to remain one of the NHL’s most potent clubs.  After all, with the likes of Ovechkin, Nicklas Backstrom and Mike Green, how could they not be?  That’s clearly way too much firepower to not rank among the league’s highest scoring squads.  And if Green can actually stay healthy, it will add yet another dimension to what is perennially one of the league’s most explosive power play units.  The return of Karl Alzner provides some stability on the blue line as he, along with John Carlson, will help anchor the defensive unit.  Between the pipes, the Caps need either Braden Holtby or Michal Neuvirth to step up more when it counts in the postseason but the duo will provide more than sufficient play in the Washington crease to keep the high powered club within striking distance.  Finally, while the departures of both Mike Ribeiro and Matt Hendricks hurt, the Capitals possess more than enough in the stable to make a run at the newly formed Metropolitan Division.

Regardless of where everyone finishes, though, it’ll sure be fun to watch all the rivalries unfold.  Even if it is called the Metropolitan Division.

The NHL regular season schedule was released on Friday. Check out our partners at TiqIQ for the best deals on Pittsburgh Penguins tickets for all 2013-14 games.