Even though 2016-17’s GF/game seems impressive relative to the Devils’ other seasons, it is still below average and must see a boost if the team expects to push for the playoffs. The onus of these issues ultimately falls on a few snake-bitten skaters who have struggled to carry their weight this season. Until Adam Henrique, Kyle Palmieri and P.A. Parenteau can return to their typical scoring rates, the Devils’ offense will cap out as a below-average unit.

It is easiest to start with Henrique, who many pegged to have a breakout 2016-17 campaign with the arrival of former juniors teammate Taylor Hall. Not only has Henrique not reaped the rewards of having better linemates, but his 2016-17 scoring rate (37 points in 82 games) is significantly lower than last year’s (50 points in 80 games) and his career average (48 points in 82 games). 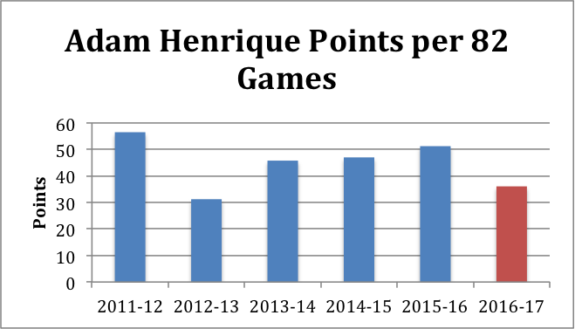 The graph above well explains just how cruel this 2016-17 campaign has been to Henrique. This is on pace to be the Ontario native’s worst performance since the lockout season and the second-worst in his six-year career. He’s currently on pace to tally 37 points in 2017 but his career average is 48 points per season.

Part of this can be explained by his rotating linemates. At first, he played with Michael Cammalleri and Kyle Palmieri, but both would wind up on the injury report shortly thereafter. When Cammalleri came back he was appropriated to the first line to fill in for the ailing Taylor Hall. Now that Hall is healthy, Henrique has gotten to play with his old linemates and could be ready to turn it around.

But there’s more to be said than linemates causing the center’s abnormal performance. Henrique’s shots/game, shooting percentage, and powerplay points are way down this season.

While these metrics are not necessarily related to one another, they also have a highly positive correlation to point totals. In fact, if Henrique shot as much as he did last season with this year’s shooting efficiency, he would not have been a 30- but a 20-goal scorer in 2015-16. All of these trends, if they continue for the season, will cost Henrique as much as 19 points, which could play a major role in the Devils’ quest for the playoffs.

Another developing star with a boatload of potential and high expectations, Kyle Palmieri has mostly disappointed in 2016-17. He has exclusively seen time in the top-six but is still on pace for a fall from grace this season. 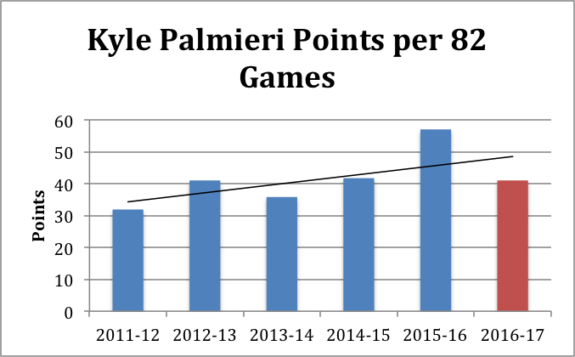 Unlike Henrique, Palmieri has not had an extensive resume of successes. In fact, the New Jersey-born winger is on pace for his second-best season. However, as can be seen from the trend-line above, Palmieri’s career trajectory seems to have taken a noticeable hit with his current performance. Even if last year’s point totals were unlikely to be repeated, the fit line still predicts him to reach 48 points this year.

The causes of Palmieri’s falter are rather unclear. His most common linemates last year were Reid Boucher and Travis Zajac. Now playing alongside Cammalleri and Henrique, Palmieri seems to have been awarded an upgrade, but he has struggled to carry his weight. Line chemistry could play a role in that, but another explanation may be his reduced ice time. Palmieri’s ice time has decreased by almost 1:30 this season.

Much like Henrique, Palmieri’s struggles can also be explained by a trio of variables: fewer shots per game, lower shooting percentage, and fewer power play points per game. All of those variables have cost Palmieri significantly in the points department. Assuming Palmieri can keep up with his career trajectory, he will need to start shooting the puck more and getting those pucks past the goalie.

No player has seen a more pronounced fall than P.A. Parenteau. The eight-year veteran is on pace for the worst production of his career. 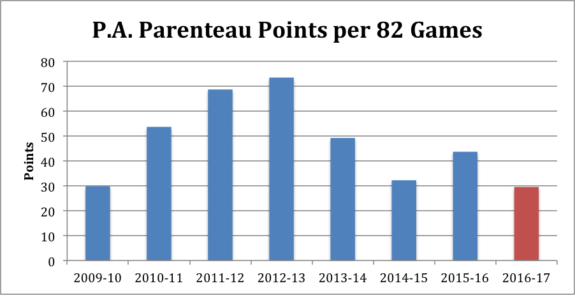 His average points per season is 52; this year, Parenteau is on pace for 27. His shooting percentage is lower but his shots per game average is equal to previous years. He has better linemates this year than he did last year in Toronto but is unlikely to match that performance. He’s still very sheltered for a top-six forward, but is not scoring well.

So what is it? In all likelihood, Parenteau’s regression could be an output of his reduced minutes but also the exit from his prime. Parenteau is seeing less time on ice this year than prior years. But reduced minutes is not the only explanation: for every minute of play, Parenteau scores 50% fewer points than he did over the rest of his career.

The only other major change for Parenteau is being another year older. Some players regress quickly and the Canadian winger could be one of that bunch. If the Devils are going to make a rush for the playoffs, Parenteau may need to slot into the third line to shelter the top scorers from his regression.