The Leaf Revolution by Christopher Ralph:

April Fools’ prank by Burkey? Not quite! It’s just Leafs GM Brian Burke being himself. This afternoon Burke was on the FAN590’s HockeyCentral with Nick Kypreos. Brian apologized to Nick if he seemed “sour”.

After officially being knocked out of the playoffs with the Canadiens’ win last night, Burke stated:

“It is a day of failure. The yardstick for success in this league is playoffs, and when you miss it that represents failure.”

So…tell me “How long has Burke honestly thought his beloved Leafs were still actually in the playoff hunt?!?” Has he even looked at the roster lately?

It is notably the first time in seven years that a Burke team has not made the playoffs, and he was quick to point that out to the HockeyCentral crew.

Burke also stated to the media today this…(that is, the Leafs officially being out of the playoffs):

“…Burns my butt! This is a somber day and (missing the playoffs in a hockey-mad city) was like a kick in the groin!”

Burke went on to provide some great insight on recently signed Christian Hanson. He descibes Dave Hanson’s (of the Slapshot movie fame) as a good sized all-around skilled top 6 forward. He reminds Burke of Blake Wheeler. He’s not a fighter, but can use his size effectively. He expected him to be in the lineup on the weekend.

When asked if the Leafs would continue to go the collegiate route for signing prospects given their flexibility with respect to the salary cap, Burke responded that this is always an option, but teams are on a level playing field given that it is entry level contracts these players sign, with only bonus system offered being different. The Leafs are rumoured to also be in the hunt for University of Denver star Tyler Bozak, who is expected to announce his signing in the near future. There were 20 teams apparently in the hunt for his services.

He did go on to say the Leafs can and will spend to the cap and will be looking to get back into the playoffs as soon as next season.

“Turning Over A New Leaf”: Other Leafs Headlines: 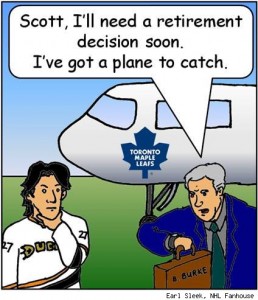 3 thoughts on ““Sour” Brian Burke Compares Leafs Missing Playoffs To “A Kick In The Groin!””