Vince Dunn and Mackenzie MacEachern also scored for the Blues, who have gone 11-4-1 in their last 16 and occupy the second wild-card spot in the Western Conference.

Binnington has started all five games during the streak and improved to 9-1-1 in his NHL career. 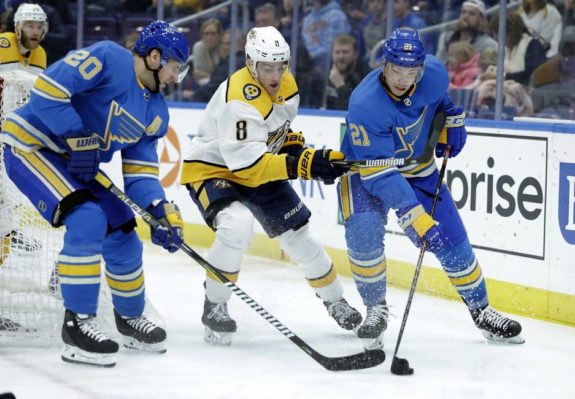 Pekka Rinne stopped 30 of 33 shots for Nashville, which had won five of six. The teams meet again Sunday in Nashville.

Dunn scored his seventh goal of the season when he roofed a rebound over Rinne 4:37 into the game.

That goal came 2 1/2 minutes after Cody McLeod confronted Pat Maroon at centre ice and fought him.

Tarasenko gave St. Louis a 2-0 lead when he one-timed a pass from Brayden Schenn past Rinne with 1:15 left in the first. Tarasenko has registered a point (four goals, five assists) in seven consecutive games.

Mattias Ekholm scored his seventh goal of the season on a power play when his shot bounced off Binnington’s glove to cut the St. Louis lead to 2-1. It was just Nashville’s second power-play goal in its last twelve games.

MacEachern answered with his second career goal when he poked a rebound past Rinne to restore St. Louis’ two-goal lead.

With Rinne pulled for an extra attacker late in the third, Nashville pulled within one when Ryan Johansen swatted Filip Forsberg’s rebound out of midair for his 11th goal of the season.

Tarasenko has 26 points (11 goals, 15 assists) in 30 games against Nashville since 2012-2013, tying Dallas’ Jamie Benn for second-most by an opposing player in that span. … St. Louis has outshot its opponent in 19 straight games. … Nashville has dropped two straight to St. Louis after winning five in a row dating to last season.

The teams head to Nashville for the second game of their back-to-back on Sunday.