You know that feeling that takes over your brain when you see your ex across the mall, holding hands with the new guy? It’s a disturbing feeling, because you instantly begin comparing yourself to the new mate. Whether it be the weight, the look or the personality, it’s something that you can’t stop thinking about.

This terrible reaction can be felt on the ice, too.

With former St. Louis Blues goalie Ryan Miller in town last Thursday, the Blues brass was hoping for a big victory, especially after a forgettable 3-0 loss to the Anaheim Ducks the Sunday prior. It was more of the same effort, as the Canucks defeated the Blues 4-1, with rookie Jake Allen between the pipes.

“We’re not playing the right way,” Blues head coach Ken Hitchcock said after the second home loss in three contests. “We’ve made a heck of a run here playing the right way; no odd-man rushes, no forced offense, don’t give the puck away and make hope-for plays offensively. We have had a shoot-first mentality that’s allowed us to be top-five in the League in scoring goals. But we don’t want to play the right way.”

The Blues had to picture that ex-girlfriend laughing in their faces, making snide comments to the new guy.

The Blues had to face a quick turnaround, as Brian Elliott received the start against the division-rival Chicago Blackhawks, who rolled into town getting points in six of their first seven games.

Things seemed grim early. Blackhawks forward Patrick Sharp converted on a five-on-three power play just 1:02 into the game. Lock the door, put the bed comforter over the window and blare mid-2000s rock for the rest of the night. The world has gotten the best of the Blues.

Jaden Schwartz changed the mood, though. He scored at 12:15 of the first period off of a fluttering shot to put the Blues on the board and tie the game. There’s a glimmer of light shining through between the comforter and the wall.

Ryan Reaves flashed open the window at 18:09 of the second period with his first of the season. Dmitrij Jaskin scored his second-career goal just 1:45 later to rip the door open and turn that emo rock into the best song you’ve ever heard. Although Blackhawks winger Kris Versteeg scored early in the third period, the Blues held on for a 3-2 win and lifted the spirits of Blues fans across the Gateway City.

In the victory, Elliott made 22 saves, including eight total saves against Jonathan Toews and Duncan Keith.

The Blues then traveled south to play the Dallas Stars. Facing a high-octane offense that included the likes of leading NHL scorer Tyler Seguin, Elliott had his work cut out for him.

He was up to the challenge, making 25 saves on 28 shots en route to winning his third game of the season. Thanks to Vladimir Tarasenko’s first career hat trick, the Blues left The Big D with a 4-3 overtime victory.

Elliott’s best save came with under 45 seconds remaining, when he cut across to stop a wrist shot from Seguin. 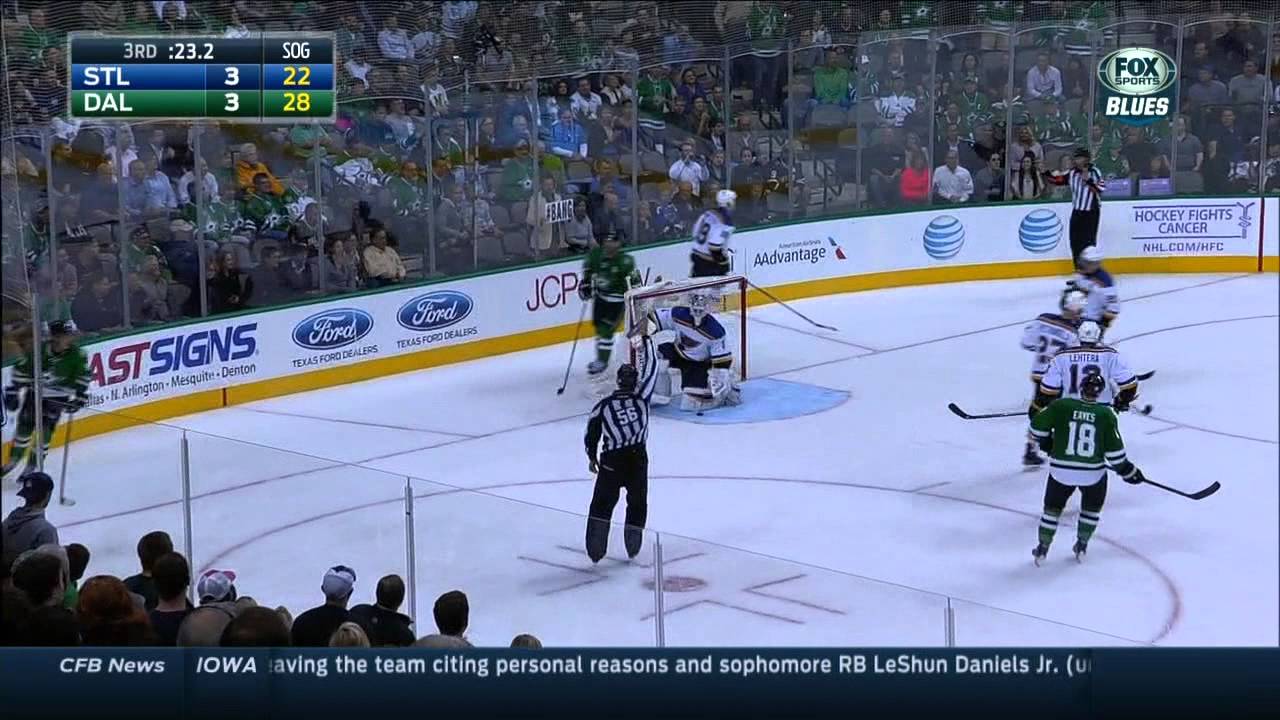 The bigger story came after the contest, when it was revealed that Blues forwards David Backes and T.J. Oshie would miss time with concussions. Forward Joakim Lindstrom was also suffering effects from a bacteria infection that hindered the Blues since their California road trip earlier in the month.

With the Ducks in town on Thursday, it was up to Allen to keep the streak going.

He did just that.

The New Brunswick native posted 24 saves and Alexander Steen and Ryan Reaves scored to thrust the Blues to their third straight victory. The 2-0 shutout win was Allen’s second of his career, but, more importantly, was the Blues’ first win against a southern California team since a 5-1 win against the Los Angeles Kings on Jan. 2 of this year.

“I felt really good this week in practice,” Allen said. “I didn’t know when I was going to get another start. I just want to be ready every time I can. (Elliott) played great Tuesday in Dallas and it was my job (tonight) to give us a chance to win.”

Just one week ago, coach Hitchcock was unhappy with his team’s play. On Thursday, he was raving about his roster – especially his goaltender.

“Jake was really solid,” he said in his postgame presser. “The feeling for me on the bench was that they weren’t going to score.”

Allen kept the Ducks scoreless with a big save on former Maurice Richard Trophy winner Corey Perry in the middle of the third period. Facing a five-on-three, Allen deflected a pass in front of the net with an outstretched stick. It bounced off Ducks winger Dany Heatley, before pinballing back to the slot with a waiting Perry ready to unload. Allen sprawled over and made a miraculous kick save.

Allen wasn’t about to take full credit for the victory. He also wasn’t ready to make excuses if his team suffered a loss.

“(We) lost those four key offensive additions and key parts to our team,” he said. “To be able to see guys from, my perspective, step up – like (Chris Porter),  (Maxim Lapierre) and (Ryan Reaves) –  and fill the other guys’ roles is pretty powerful to me and allows me to do my part.

“Every team in the league is going to have losses all season long. Unfortunately, we have them right now.”

The Blues will have to face another ex on Dec. 6 when Jaroslav Halak arrives in town with his latest team, the New York Islanders.

Elliott and Allen will be up to the task. The Blues will be ready this time to counter by showing off the good-looking tandem in net.