On Saturday, I did something I hadn’t had a chance to do in a long time. I didn’t take any notes, tweet, or analyze gameplay while watching a hockey game. The Stadium Series made it’s second appearance in California as the San Jose Sharks and Los Angeles Kings faced off in Levi’s Stadium in Santa Clara.

One Monstrosity of a Stage

If you have never heard of Levi’s Stadium, here’s a bit of a rundown.

Opening an hour before the gates, Spectator Plaza featured free giveaways and photo ops for the discerning fan. Kings and Sharks fans alike shared in some free stuff and contests before the game. Fans also posed in front of blown up jerseys and the disembodied Shark head. GoPro, Coors, food trucks, and more were all on hand to open the festivities.

Plenty of fans arrived early for the fan fest. The vast crowd would be an omen of things to come.

Walking into the stadium, the first thing I was dying to see was the rink. Of course, it is center stage. People swarmed the concourse. Black and grey sweaters were all over but it was overwhelmingly teal. The open environment is a far cry from the hockey cathedrals of the NHL. The lack of jumbo scoreboard floating in the sky was my first bit of culture shock.

Then, I looked up. Boy, oh boy. The biggest video screens you have ever seen (unless you’ve been to AT&T Stadium in Texas) towered on both ends of the stadium. Nearly 10,000 square feet and boasting the 24th spot in largest video screens in the world, the screens displayed crisp video. Even from my seat right on the center line, I’d prefer to watch TV at Levi’s than on my modest 32 inch screen at home (sorry Vizio).

There is a certain allure that hockey arenas have. The majority of stadiums in the NHL have capacities under 20,000. Levi’s united more than 3 and a half games worth of fans. For an away game, Kings fans were out in full throat as their number eclipsed five figures. A live orchestra brought in the anthem and the above flag was displayed. Never more has America tried to loom over the predominantly Canadian game.

We sat in the third tier of the stadium. Right on the blue line and in the first row, we had a great view. Sure, it was probably farther than most nosebleeds at hockey arenas, but the view of the grand stage was amazing.

But as the game rolled on, I began noticing a few glaring differences. Having played hockey almost my entire life, when I watched games indoors, I loved listening to the shouts and talk between coaches and players. The calls for the puck, the support from the bench, it was all so intimate. But in Levi’s Stadium, there was a strange sound that filled the air. It was an echo. To combat the lack of sound from the ice, the NHL tried to blast the sound over the stadium sound system. What resulted was a strange mix of bumps on the boards and the click of a puck hitting a stick. Twice.

Some fans around me complained of difficulty tracking the puck. Maybe my eye is more used to it, but I never felt there was an issue there. What I did notice was that the lowest tier of seats, and therefore the closest, did not enjoy the best view. Many of them, had no view at all. The low levels got a great shot of the players heads and torsos.

The Sharks traditional Jaws theme boomed through the stadium when the Kings took their first penalty. What a sight to see the entire crowd moving at once. This was even more impressive when the Sharks scored their lone goal of the game and approximately 50,000 people boomed a “HEY” in the celebration. Chills. The following video can’t do it justice. 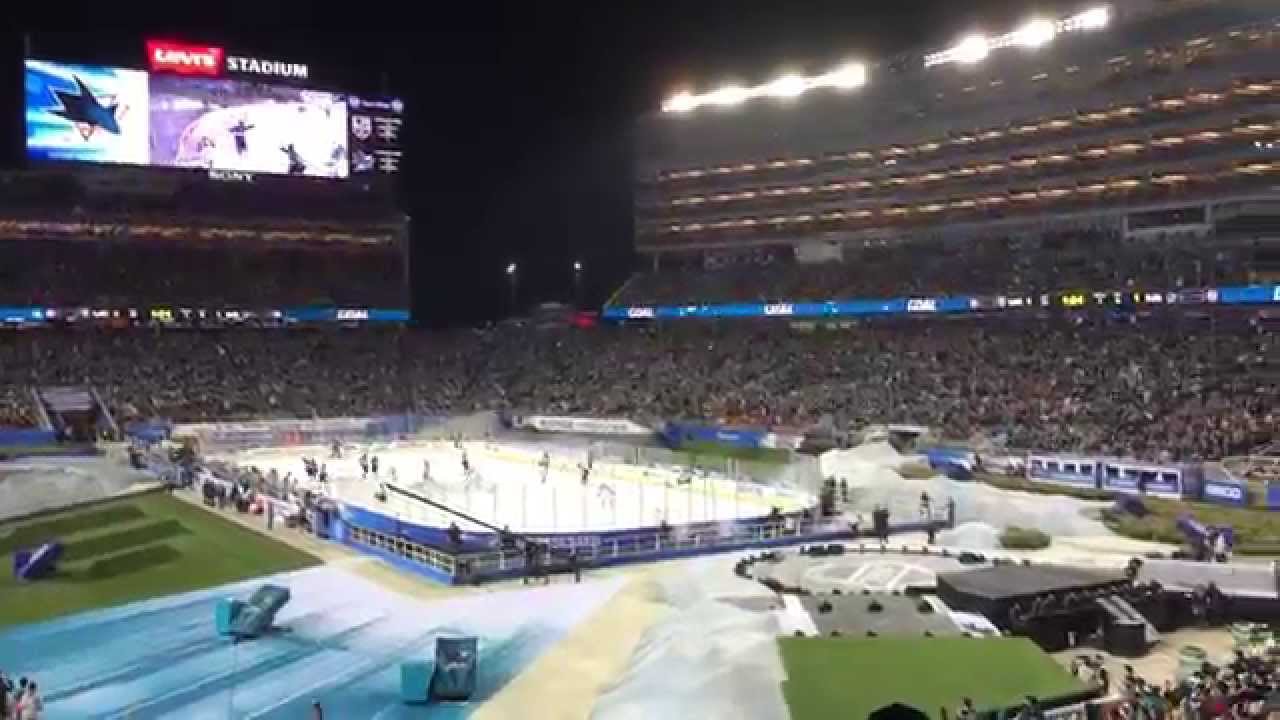 The intermissions were pleasant. Dimmed lights and concerts coupled with fireworks to make an entertaining break from the action. Here’s one picture you won’t be able to recreate indoors.

With the house lights off, the executive suites glowed like a skyscraper.

The game ended with a 2-1 Kings victory and about 50,000 disappointed fans (and 20,000 less disappointed) made their way to the exits. Here’s where the night took a turn.

At this point in the story, I am disappointed to say I had no more pictures of the days adventures. But that’s because the end of the game was the end of the fun. 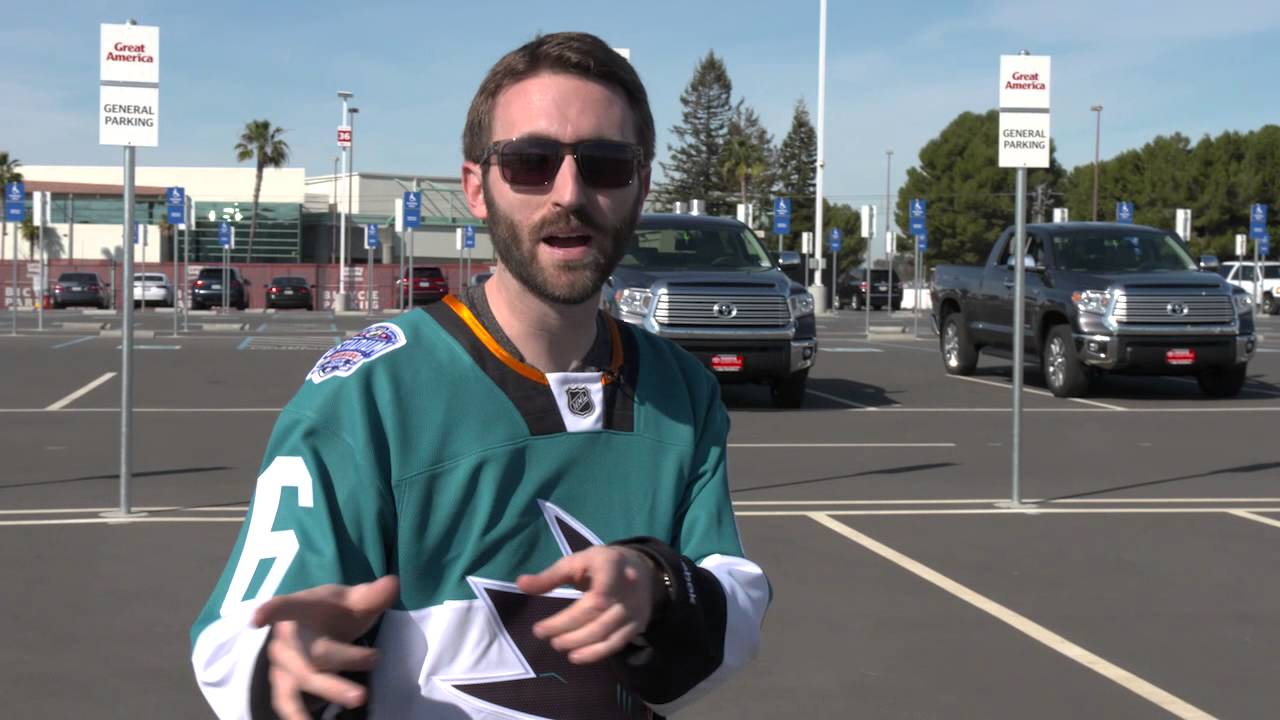 Levi’s has a problem. A very, slow problem. Fans were advised to take mass transit to get to the game (because 49er games clog surrounding freeways). A record 16,000 spectators took this advice and subsequently overwhelmed local transportation options. The game ended at around 10:00pm at night. I made it onto the train on the street outside the stadium at about 11. Wowzers.

Bigger Than One Game

The outdoor games have become showcases for the sport more than actual games. Experimental ice conditions, different lighting situations, and a completely different environment force players into new challenges. As a fan, don’t go into one of these games expecting a typical hockey game. There’s more hassle involved. The procedures aren’t as well practiced and there will be mistakes.

But, at the same time, you have to admire the spectacle. The lovely Kings fan couple sitting next to us mentioned how last year’s Dodger Stadium venue was a nightmare. They bemoaned terrible sight lines and awkward placement of the rink. They loved this year’s. Football stadiums seem to have the upper hand on that.

I loved the game, but I had the right expectations. Stadium Series is about celebrating our great sport. In what sport can they change the venue so drastically? No other major sport can adapt to change as much as the NHL can. A few of these outdoor games were played in near blizzard conditions! Baseball runs for cover at the sight of water. And basketball won’t even play outdoors despite being born on the black top! Enjoy the game folks, it really is beautiful.