When Steve Downie was signed in the off-season, the Penguins knew exactly what they were getting.  They were acquiring a gritty, toes-the-line forward who would add toughness that had been missing for several seasons.  The Penguins also knew they would get a depth scorer who has solid hands in tight and can chip in when the stars like Sidney Crosby and Evgeni Malkin are struggling.

Downie, on Tuesday night, scored his 13th goal of the season to put the Penguins ahead of the St. Louis Blues 2-0 midway through the second period.  Although the Penguins went on to lose the game, 3-2, just :35 into overtime, Downie’s play did not go unnoticed.  Despite his minus-1 rating, Downie was aggressive on the forecheck and showed great skill with his goal in tight. 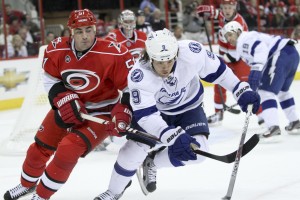 It’s hard to argue that Steve Downie has not been an important member of this Pittsburgh Penguins team this season.  He has done everything he’s been asked to, yet still gets criticized for his lack of discipline.  After all, he does lead the NHL in penalty minutes with a whopping 223; a career high.  His previous best was in 2009-10 with the Tampa Bay Lightning (208), which was also his best season in the NHL to date.

His current run with the Penguins is his best season of the last five campaigns and continues to impress.

Downie has 27 points in depth role that he has excelled at throughout the season.  He is second behind Evgeni Malkin in shooting percentage (14.3%), seventh in goals (13), and eighth in points.  Those are pretty good numbers considering he averages just over 12 minutes a game.

Despite his propensity to take multiple penalties a game, Downie has proven to be a vital member of the Penguins and looking forward to the playoffs, will have to be a key contributor.  He has the ability to influence the game, whether it be negatively with his penalties or positively with his offense.