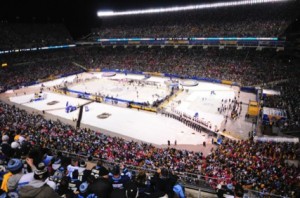 It’s a weathered cliché, all too familiar for anyone with even the most basic business training. And yet, somewhere around 2004, the NHL’s head office lost sight of that message.

It was during the ‘04-05 lock-out that the league began making adjustments to the rule book in an attempt to speed up the game, encourage more scoring, and ultimately widen its appeal to a waning American fan-base.

The neutral zone was opened up with the removal of two-line passes, puck-handling goaltenders were reigned in and chained to their trapezoids, and clutching and grabbing were replaced with full-speed, open-ice head shots.

It was decided that tie games would no longer be decided by actually playing hockey, but rather by a  shoot-out style skills competition; essentially hockey’s answer to the homerun derby.

The NHL didn’t like the sizzle, so it changed the steak…

Fast-forward seven years, and the countdown to this year’s Winter Classic is coming to a close, with millions of viewers from across North America preparing to tune in to what has become the league’s premier mid-season event.

The New York Rangers and Philadelphia Flyers will collide at 3 pm this afternoon at Citizens Bank Park in Philadelphia, marking the fifth consecutive sell-out for the annual outdoor game, which was launched in 2008.

Once again fuelling this year’s media hype is the wildly popular HBO series, 24/7, which documents the participating teams and their respective regular seasons as they prepare to face off in the NHL’s newest New Year’s tradition.

And fan interest couldn’t be better. Ratings have been so good, in fact, that four of the five most-watched regular season games in NHL history are now Winter Classic match-ups.

The funny thing is…for all the changes made to speed up the game, the most successful event of the season is also, by far, the slowest game of the season.

Approximately 43,000 fans will file into Citizens Bank Park this afternoon, along with another 4.5 million television viewers, to watch the puck grind to a halt on a slushy ice surface located so far from the stands, a FoxTrax glowing orb couldn’t make it visible.

And they will love every second of it.

Not because the score will be 7-6 (although with Philly’s offensive flair and patented disappearing goalie trick, it very well could be), but because they were sold on the romanticism of the game.

They were given access to the players and coaches like never before and were shown the passion and integrity with which the world of hockey operates.

They were given a new sizzle.

In just four years, and without trickery or cheap gimmicks, the Winter Classic has achieved for the National Hockey League what years of fundamental rule changes never could; relevancy in the American market.

The league would be wise to take heed of this example moving forward.

With further rule changes inevitable in light of the recent concussion epidemic, the solution for improving player safety without sacrificing U.S. marketability almost definitely lies in a combination of slowing the game back down while providing an in-depth and unique fan experience.

After seeing the hype and romanticism of an outdoor game, fans are now lining up in record numbers to watch a game which will undoubtedly be significantly slower than most pre-lockout games ever were. The steak is average, but the sizzle is spectacular.

Rather than continuously changing the game itself and infuriating purists and players alike along the way, perhaps the time has come for the NHL to simply change up its approach to marketing and take the lead in terms of behind-the-scenes access for its fans.

It is the emotional connection to outdoor hockey and the “humongous-big” personalities which have made the Winter Classic such a fan-favourite, drawing in more new fans along the way than smaller goalie equipment and more holding penalities ever could.

And even if the National Hockey League fails to recognize all of this, there is at least one basic lesson to be learned about the American viewing audience from its Winter Classic experience;

If all else fails, just make a reality show.