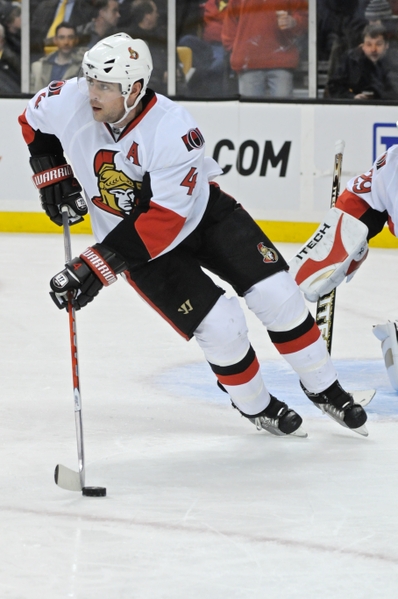 Chris Phillips recently played in his 1,000th career NHL game with the Ottawa Senators. In recognition of this accomplishment, let’s take a walk down memory lane and look back on ten career highlights from Chris Phillips.

1. Phillips was selected with the first overall pick in the NHL entry draft in 1996 by the Ottawa Senators. The ’96 draft was a rather weak draft as the first rounds other most notable names were players such as Andrei Zyuzin, Jean-Pierre Dumont who were selected second and third. Ruslan Salei, Dainius Zubrus, Derek Morris were also first round choices. The Winnipeg Jets who five days later became the Phoenix Coyotes selected Daniel Briere with the 24th selection. Hidden gems from that draft included Zdeno Chara in the third round by the New York Islanders, Pavel Kubina in the seventh round by the Tampa bay lightning, and Tomas Kaberle in the eighth round by the Toronto Maple Leafs.

2. Phillips returned for another year of junior hockey and finished that season with the Lethbridge Hurricanes where he helped the team win the Western Hockey League Championship Presidents Cup by scoring 25 points. Phillips won the Bill Hunter Memorial trophy as top defenseman in the WHL and the team finished second in the Canadian Hockey leagues memorial Cup tournament.

3. In 1996, and 1997 Phillips was part of Team Canada in the IIHF World Junior Championship Tournament and Canada won Gold both years.

4. In 1997 Chris Phillips made his NHL debut with the Senators. In that season he played in 72 games scoring five goals and 16 assists in his rookie season.

5. In the 2002-2003 season the Senators won the presidents Trophy and had a successful playoff run going all the way to the Eastern Conference finals. In the Finals the Senators lost to New Jersey but Phillips scored on of the biggest goals of his career. Facing elimination in game six, the game went to over-time and Chris Phillips was the hero scoring the game winning goal to stave off elimination for one more game.

6. At the commencement of the 2006 season Phillips received the honor of being named as one of the Senators alternate captains. During that season, he reached his milestone career 500th game in the NHL with the Ottawa Senators.

8. Chris Phillips represented Canada again on the international stage when he played in the 2000, 2005 and 2009 World Championship earning the Silver medal in both ’05, and ’09.

9. In 2007 Phillips was within two wins of the Stanley Cup as the Senators lost the Cup finals in game five to the Anaheim Ducks.

10. On February ninth 2012 Chris Phillips played in his 1,000th career NHL game at home versus the Nashville Predators. He has played his entire career with the Ottawa Senators. Chris became only the 25th player in NHL history to achieve this milestone playing his entire career with one team. In the game, he scored his first goal of the season, and in a feel good storyline he scored again doubling his goal total from a forgettable previous season.

Last season was a difficult year for both Phillips and the Senators. The team suffered a miserable season and saw GM Bryan Murray trade away several players kick starting a rebuild. Despite trading players such as Mike Fisher, Chris Kelly, and Alex Kovalev Murray opted not to trade Phillips who was set to become an unrestricted free agent. Instead, Phillips resigned to remain with the only team he has played for. Chris Phillips and Captain Daniel Alfredsson will play out their career in Ottawa and be the first players in the teams’ modern history to see their numbers one day hanging in honor from the top of Scotia Bank Place in Kanata.

Devils Can Find Goaltending Help Deep in the Draft

Kraken Missed Out on Laviolette for Head Coach Job