Training camp is just over a month away and the anticipation is building. The Detroit Red Wings’ roster is largely set, aside from Daniel Alfredsson’s decision and the re-signing of Danny DeKeyser. The Red Wings are one of the few teams in the NHL that have a variety of possible outcomes this year. They have the potential to come together and make a deep playoff run. They may follow last season’s path and barely scrape their way into the playoffs. Or, the most frightening thought, they could miss the playoffs for the first time in 24 years. There are a significant number of variables that will affect the final outcome, including but not limited to, injuries, how the veterans hold up, and how the youngsters prosper. In particular, there is one player’s development who may influence the outcomes more than anything else. That player is defenseman Brendan Smith.

Smith’s play will impact a large number of potential decisions for Ken Holland and Mike Babcock. If Smith is able to take his game to the next level, his play impacts whether or not the Wings bring up Xavier Ouellett or Ryan Sproul and potentially rush their development. It impacts whether or not the Wings sacrifice a young offensive player such as Gustav Nyquist or Tomas Tatar in order to acquire a defenseman in a trade. Ultimately, Smith’s play dictates the future of a number of different players as well as the future of Detroit’s playoff streak.

In reviewing Smith’s numbers, you can clearly see that the 25-year old defenseman made significant improvements from start to finish. Below, you will see a graph of Smith’s game-by-game 5-on-5 Corsi For%, representing how well Detroit possessed the puck when Smith was on the ice. 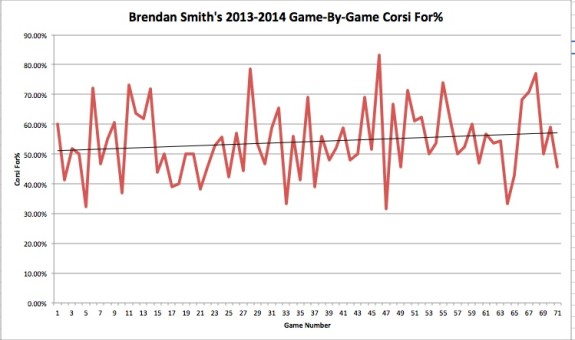 I’ve added a linear trendline to the graph so you can appreciate how Smith’s possession numbers improved as the season went along. To further illustrate this point, if you focus on Smith’s number pre-Olympic break and post-Olympic break, there is a stark contrast in his 5-on-5 Corsi For%. Smith appeared in 47 games prior to the Olympic Break and registered an average 5-on-5 Corsi For% of 52.70%. In the 24 games following the Olympic break, Smith posted a strong Corsi For% of 56.98%. Granted this is a very small sample size, but it compares favorably to the full season numbers of the NHL’s elite offensive defensemen such as Duncan Keith (56.6%), P.K. Subban (49.9%), and Drew Doughty (58.5%). While Smith did face a lower quality of competition than these guys, it’s still worth noting his exceptional improvement over the 2nd half of the season. 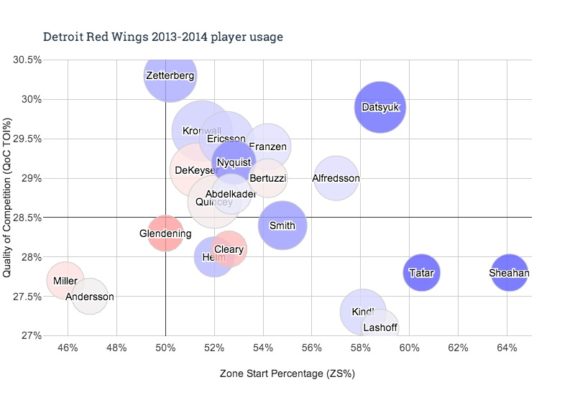 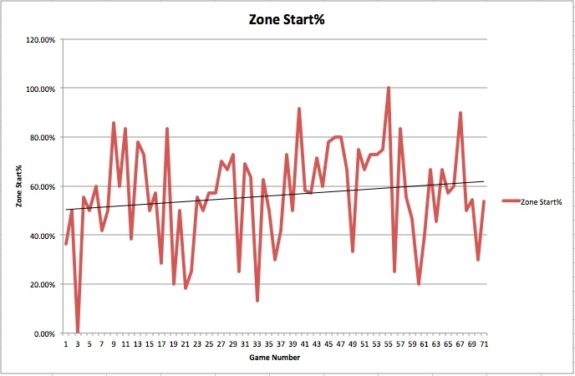 Looking at Smith’s zone-starts, we can definitely see that as the season went on, Mike Babcock decided to deploy Smith in the offensive zone far more frequently. We can see that this trendline correlates very nicely with the trendline established in the Corsi For% graph. In terms of raw numbers, Smith’s average zone start% prior to the Olympic break was 54.84% compared to 58.63% following the break. This could definitely factor in to Smith’s possession numbers looking better. However, Smith’s quality of competition remained consistent throughout the season. This is to be expected as Smith was not really used against higher levels of competition early on. It was clear throughout the season that Smith will be a 2nd or 3rd pairing defenseman and that is where he remained throughout the season.

Using statistics over at Hockey Analysis, we can see how Brendan Smith impacted the goals for above expected and the goals given up above expected. Smith had a HARO rating of 9.5 at 5-on-5 , indicating that when Smith was on the ice, his team had 9.5% more goals than expected. In addition, Smith had a HARD rating of -2.8, indicating that when he was on the ice, the Wings gave up 2.8% more goals than expected. This gives him an average HART rating of 3.3 (averages HARO + HARD). The 3.3 HART rating was one of the best ratings on the Wings, trailing only Jakub Kindl and Danny DeKeyser. However, when you plot each players’ HART vs. the HART of their competition, we can get a picture of how each player performed against the quality of competition they faced. Better data points will be towards the upper righthand corner of the chart. 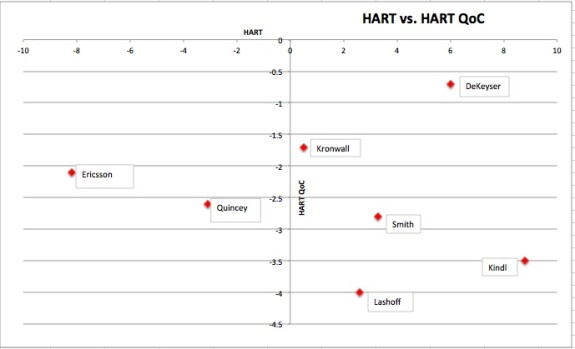 On the x-axis is each player’s HART rating and the Y-axis is their HART QoC. We can see that although Kindl posted the highest HART of any of the Wings, he also faced the 2nd lowest level of competition. DeKeyser on the other hand faced the toughest competition and posted the 2nd highest HART rating, indicating that he had a strong season. Smith is right in the middle of the pack on this chart, and we’ll have to see how he improves as he faces higher levels of competition.

All of this data is only good if we can use it to figure out a way to make Smith more impactful. At 25 years of age, Smith should be entering his prime as a defenseman and people will be looking for him to take the next step this season. There are a few things the Red Wings’ coaching staff can do to put Smith in the proper situations. First, let’s take a look at Smith’s ice time with different defensive partners this season (data obtained from Hockey Analysis)

The table shown above depicts how Brendan Smith performed at 5-on-5 when paired with each player. From this table we can see that Smith was most effective when paired with Niklas Kronwall. In absolute measures, the team generate four more shot attempts per 20 minutes when these guys were on the ice together. That absolute difference is the same as what happened when Boston paired Dougie Hamilton with Zdeno Chara (played 575 minutes together). One thing the Wings could consider would be to try and pair Smith with Kronwall more frequently. If you think about it, that pairing makes sense. Smith is the offensive run-and-gun and at his advancing age, Kronwall is much better suited as a stay-at-home defenseman. This pairing reminds me of what former Red Wings’ great Nicklas Lidstrom said about his defensive pairings when he was young. Lidstrom mentioned that he was paired with the late Brad McCrimmon. McCrimmon was such a great stay-at-home defenseman that Lidstrom could join the rush and put his offensive skills to work. Smith might benefit from a similar principle. While some will argue that this will expose Smith to a higher quality of competition, I would argue that by being paired with a more reliable defensive defenseman, Smith will be able to relax and play his game.

Aside from line combinations, we can see that by increasing the percentage of shifts that started in the offensive zone, Smith’s possession game improved. If Babcock can keep Smith’s zone start% similar to where it ended last year, that will offer Smith more opportunities to contribute offensively. It would be naive to think that Smith will become a great defensive defenseman. To me, he most closely resembles the Ottawa Senators’ Erik Karlsson. Early in his career, Karlsson was much maligned for his defensive miscues, pinching too often, and forcing the play too much. However, in his third full season, Karlsson was able to put it all together and win the Norris Trophy. By no means am I suggesting that Smith will win the Norris Trophy next season, but Smith has the potential to take his game up a notch. I personally believe that a successful season for Smith will be 12-15 goals and 40-45 points. He is definitely capable of that, and with help from Mike Babcock and his teammates, he’ll have the opportunity to put his skills to work. The Wings will certainly be counting on him, as he may hold the key to their playoff streak.