In Boston, the name “Ray Bourque” carries a lot of weight. Fans remember his devotion to the organization over the course of 21 seasons. He is also known for memorable moments such as his unveiling of the No. 77 jersey when Phil Esposito’s No. 7 was retired, the number that Bourque bore at the time.

Wayne Gretzky was expected to slip into the 1979 NHL Entry Draft due to the required draft age being dropped. Gretzky, however, was under contract with Edmonton Oilers owner Peter Pocklington and decided to stay with the team. The Oilers agreed to trickle down to the bottom of the draft order in exchange for keeping “The Great One.”

Bourque, selected eighth overall by the Boston Bruins in the 1979 NHL Entry Draft, went on to see greatness himself. Bourque played 1,518 games for Boston, compiling 395 goals and 1,111 assists. The Hall-of-Famer eventually played for the Colorado Avalanche, helping them win the Cup in 2001, and bringing his career totals to 410 goals and 1,169 assists in 1,612 games. Bourque finished with a career plus-minus rating of plus-528. In his last season with the Bruins, Bourque averaged nearly 30 minutes of ice time per game while appearing in 81 contests.

Three defensemen were selected prior to Bourque joining Boston via the eighth overall pick of the draft. They were Rob Ramage, Craig Hartsburg, and Keith Brown. Though all three defensemen led successful NHL careers, none of them would be selected before Bourque if their respective teams had a mulligan.

Selected first overall in the 1979 NHL Entry Draft, Rob Ramage brought hope to a struggling Colorado Rockies team. In his rookie season, Ramage managed eight goals and 20 assists while his plus-minus plummeted to a minus-40. 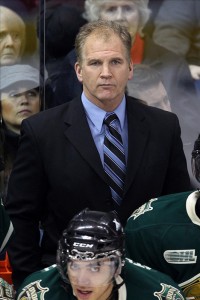 The Ontario-native followed up this performance with 20 goals and 42 assists in his sophomore season. Over half of those goals came on the power play while three were game-winners. Ramage would continue to contribute offensively for the Rockies, but his plus-minus rating did not improve until he found himself in St. Louis.

Ramage was a four-time NHL All-Star and a two-time Stanley Cup champion as a member of the 1989 Calgary Flames and the 1993 Montreal Canadiens. Though Ramage found himself in the conversation for the Norris Trophy a number of times, more people seemed to be talking about Bourque. In fact, while Bourque won the award for best defenseman five times, Ramage failed to claim the title even once.

Ramage ended his NHL career with 139 goals and 425 assists through 1,044 appearances.

Hartsburg was drafted sixth overall in the 1979 NHL Entry Draft by the Minnesota North Stars, playing all 10 seasons of his career with the team. In his rookie season, Hartsburg lit up the scoreboard for 14 goals and 30 assists. His best performance offensively came in the 1981-82 season when he put up 77 points in 76 games.

Hartsburg was never part of a Stanley Cup championship team, though he came close in 1981. The North Stars found themselves against the New York Islanders in the Stanley Cup Final. The Islanders went on to win the series four games to one, marking their second of four consecutive Stanley Cup victories.

Hartsburg produced 15 points in 19 games during the 1981 playoffs, while his playoff totals rest at 42 points in 61 games.

After hanging up the skates, Hartsburg took a stab at coaching. Ranging seven years, Hartsburg’s coaching career resulted in a record of 201-208-82, earning 484 points. He made the playoffs twice with the Chicago Blackhawks and once with the Mighty Ducks of Anaheim, though he failed to win the Stanley Cup from behind the bench.

Drafted seventh overall by the Chicago Black Hawks in 1979, Brown spent 14 out of his 16 NHL seasons in the Windy City. As a 19-year-old, in his rookie season, Brown put up two goals – both game-winners – and 18 assists for 20 points. He doubled down the following season, notching 43 points in 80 games.

As a member of Chicago’s club, Brown appeared in the playoffs every year from 1980 to 1993. During that time, Brown scored four goals and 32 assists in 103 matches.

At the tail end of his career, Brown was traded to the Florida Panthers for winger Darin Kimble. With the Panthers, Brown totaled just 12 points in 64 games spanning two seasons.

Though he missed games due to injury a handful of times, Brown was still able to manage 68 goals and 274 assists in the 876 games he appeared in. He finished a season with a negative plus-minus rating only three times.

It didn’t take long for seven NHL teams to realize they let a great player slip through their grasps. In his rookie season, Bourque was awarded the Calder Trophy for rookie of the year. This was likely due to his impressive 17 goals and 48 assists and a plus-minus rating of plus-52 through 80 games.

Now, the number 77 hangs valiantly from the rafters of TD Garden in Boston.

Maybe that’s why Bourque is a 19-time All-Star, a five-time Norris Trophy winner, and a Hockey Hall-of-Famer.