Hockey is a game of inches. Split-second judgments by players, and close calls by officials can, and have had, a tremendous impact on the game throughout the years. With the game being played at an ever-faster pace with bigger, strong, better trained players, controversy has naturally followed. Mention one of the following NHL controversies at your local sports bar, and it’s bound to set off a serious debate.

Down 3-1-1 in the 1972 Summit Series, the Canadian team needed something to change their luck and avoid giving up the title of the greatest hockey nation in the world. In Games 1-5, Valeri Kharlamov had been a consistent thorn in the side of the Canadians. His blinding speed and clever stickhandling allowed him to score 3 goals and assist on 3 others in the first 5 games. If the Canadians were to avoid defeat, they had to do something other than finish their checks against Kharlamov.

Bobby Clarke was a warrior on the ice that would do anything it took to win. Anything. In Game 6, with Kharlamov streaking down the ice into the Canadian zone, Clarke wound up and gave Kharlamov a powerful two-handed slash to his ankle. Clarke was given a two minute minor and ten minute misconduct. Kharlamov stayed in the game, but the damage was done. Clarke reportedly fractured Kharlamov’s ankle. Kharlamov would miss Game 7, a 4-3 Canadian win, and returned for Game 8, but with his abilities noticeably limited by the injury. The slash clearly worked, as Kharlamov had just one assist combined in the rest of Game 6 and Game 8.

The Summit Series was not just a series of hockey games, but a political war. Clarke was willing to find a way to slow down Kharlamov by any means necessary. But, did he cross the line between a passion to win, and brutality?

It was May 27th, 1993. The Toronto Maple Leafs led the LA Kings 3-2 in the series that would decide the Campbell Conference Finals. The game was tied 4-4, and was headed into overtime. With the Kings on the power play, Gretzky took a shot from the circle, and after he re-gained his balance from his follow through, he clipped the Leafs’ Doug Gilmour in the face with his stick. 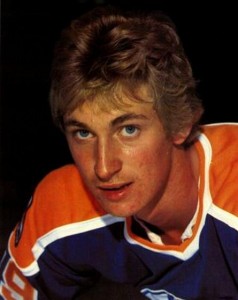 Gilmour went down in a heap, and was visibly bleeding from his chin. In 1993, a high sticking penalty that drew blood was grounds for a five minute penalty and game misconduct. The referee, Kerry Fraser, claimed to not have seen the play and convened with his fellow officials before making a ruling on whether to penalize Gretzky. Meanwhile, Gretzky skated around nervously with a concerned look on his face. After their conference, no penalty was assigned to Gretzky, much to the shock of the Leafs. The Kings remained on the power play, and Gretzky scored the overtime game winner shortly after.

Did none of the officials really see the play? Or were they afraid to give the greatest player on earth a 5 and a game in overtime of a game where his team could be eliminated? Years later, Fraser has admitted he blew the call. Gretzky would turn in one of the greatest individual performances of his career in Game 7, scoring three goals and assisting on another, bringing the Kings to their first ever Stanley Cup final.

Billy Coutu was a solid hockey player in his day. He was able to win a Stanley Cup in 1923-24, and was the captain of the Montreal Canadiens in 1925-26. A defenseman, Coutu was a large player for his day at 5’11” 190 lbs., and a rough customer that finished in the top 10 in penalty minutes five times, leading the league in 1920-21. Among NHL controversies, Coutu might be the least well known.

In the 1927 Stanley Cup final, the Montreal Canadiens had defeated Coutu’s Boston Bruins 2-0 in a best of three series. At the end of the game, at the request of coach Art Ross, Coutu incited a brawl by assaulting referees Jerry Laflamme and Billy Bell. He beat Laflamme and punched him while he was on the ground, then tackled Bell when he attempted to come to the aid of Laflamme. Disgusted with Coutu’s behavior, commissioner Frank Calder banned Coutu from the NHL for life. To this day, Coutu is the only player to have ever been suspended for life from the NHL. The ban was lifted two years later, but he would never play in the NHL again.

Maurice Richard was a legendary goalscorer with a powerful shot, and an even more powerful temper. When angered, Richard could turn into one of the most feared, dangerous fighters of his day. On March 13th, Richard received a high stick from Bruins defenseman Hal Laycoe. Referee Frank Udvari put his arm up, but when the whistle blew Richard went over to Laycoe and hit him in the head with his stick. A fight ensued, and as linesman Cliff Thompson tried to pull Richard away, Richard beat him unconscious with two punches. Richard was given a match penalty, and league president Colin Campbell suspended him for the remainder of the regular season, and the playoffs, the longest suspension Campbell ever laid down.

Canadiens fans cried foul, and when Campbell attended a Red Wings vs. Canadiens game in Montreal a few days later, chaos ensued. Fans pelted Campbell with food and trash, and one fan managed to hit him. A tear gas bomb was set off inside the arena, the fans evacuated, and the Canadiens forfeited the game. The fans took to the streets in anger, rioting and causing over $800,000 in today’s dollars worth of damage. The Canadiens would lose to the Red Wings in 7 games in the Stanley Cup Finals.

Canadiens fans say the punishment was too harsh. If Richard wasn’t suspended, there’s a good chance he pushes them to win the Cup that year. Outsiders say Richard was lucky to not be suspended longer, and point to Coutu’s similar actions receiving a life suspension. When one considers the Rocket’s previous dust-ups with officials, it’s clear that he was lucky to not be suspended longer.

In the 1992-93 regular season, Pierre Turgeon enjoyed a breakout season. He scored 58 goals, and assisted on 74 others to give himself 132 points, good for fifth in the whole league. A sublime passer and playmaker, Turgeon’s game-breaking offensive talents looked like they would vault him into NHL stardom. In Game 6 of the Patrick Division semi-finals, Turgeon scored a goal to put the Islanders up 5-1, and on track to win the series. Dale Hunter, the man from whom Turgeon had stolen the puck, laid Turgeon out mid-celebration.

Turgeon separated his shoulder on the play, and missed six of seven games in the next round. Hunter was suspended 21 games for the hit. For Turgeon, it ended up being a career-altering hit. He never turned into the superstar he was poised to be, and it was because of that hit. He remained a dynamic offensive talent, but visibly shied away from contact and was unwilling to participate in the physical elements of the game. He was still a successful offensive player, but not the superstar he could have been.

On February 16th, Markus Naslund was concussed on a hit by Steve Moore. Canucks GM Brian Burke called it a “headhunting hit”, Brad May put a bounty on Moore’s head, and Bertuzzi called Moore a “piece of ****”. In their next game, the Avalanche and Canucks played to a tie without any significant incidents, possibly because commissioner Gary Bettman was in attendance. 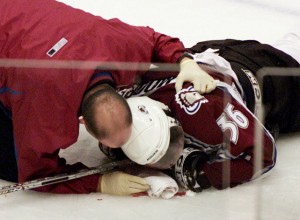 But in their next match, there were four fights in the first period alone as the Avalanche jumped to an early 5-0 lead. By the third period, the lead was extended to 8-2, and Todd Bertuzzi began following Steve Moore around the ice, trying to goad him into a fight. Moore, who had already fought Matt Cooke in the first, didn’t bite. Frustrated, Bertuzzi jumped on Moore’s back and drove his face into the ice, as players from both teams jumped onto the dogpile.

From the attack, Moore suffered three fractured vertebrae in his neck, a grade three concussion, vertebral ligament damage, stretching of the brachial plexus nerves, and facial lacerations. He would never play professional hockey again. Bertuzzi was suspended for 20 games, and a lawsuit against Bertuzzi regarding the incident is still in the court system.

In the NHL, there is something to be said for defending your star players. If an opponent takes liberties with them, you have to respond. But in this case, Bertuzzi took it entirely too far.

After 100 minutes of hockey, three regulation periods and two overtimes, the Dallas Stars and Buffalo Sabres remained tied at 1 in Game 6 of the Stanley Cup Finals. The Stars led the series 3-2, and were looking to clinch their first cup in team history.

At 34 years old, Brett Hull had the third highest goals-per-game in NHL history. However, he had never made it past the second round of the playoffs in his career, until 1999.

Dominik Hasek, the Vezina Trophy winner that season, had turned away 48 of 49 Stars shots. However, it was the 50th shot that would finally beat him. In the most famous of NHL controversies, Brett Hull scored in triple overtime to win the cup. However, his left skate was in the crease, which was illegal at the time.

The NHL defended the ruling by saying Hull’s two shots on goal counted as a single possession, and that Hull had possession of the puck when he entered the crease. Buffalo fans disagreed, pointing to similar plays that were waved off during the regular season. The NHL would eventually eliminate the “foot in the crease” rule to avoid further controversy.