Wouldn’t it be nice to have a crystal ball to see what your team would look like five years from now, ten years from now? Knowing how your draft picks would pan out? (Instead of taking David Legwand second overall in 1998, how about Pavel Datsyuk?) And thus, knowing who to pick for your fantasy team or for Proline?

Unless you’re Marty McFly and have a Sports Almanac from the future, this may be the next best thing; an educated guess from a seasoned fan. I’ve compiled the starting lineup, barring no trades or disastrous injuries, of the 2017 Buffalo Sabres. Write these down and put them in your safety deposit box for the next half-a-decade.

Taken in the 6th Round in the 2009 NHL Entry Draft, the Western New York native had a 1.95 GAA in 84 games at Miami University.  It was his time as a RedHawk that he perfected the three P’s of goaltending: positioning, poise and patience; those three earned him the title of Central Collegiate Hockey Association Goaltender of The Year. At 6’6, Knapp would be the second tallest goalie in the NHL, only behind Ben Bishop of the Senators. Knapp was signed to a two-year entry-level contract back in April, and played his first AHL game last week. He recorded an impressive 30 saves in his debut (but the Americans lost 4-3).

Quite an impressive resume: a member of Team Canada’s 2009 U18 team, captain of the Kootenay Ice, All Star appearances in the WHL and AHL, but McNabb caused much controversy for his elbow to Joey Hishon during the 2011 Memorial Cup Playoffs, and was thought to be a filthy player. His coaches are looking forward, and have remarked on other aspects of his play, citing that McNabb knows how to hit and can be useful in different situations, including the man advantage. Another giant at 6’4, he could be the twin tower to Tyler Myers, whom he played prep school hockey with at Athol Murray College of Notre Dame. Drafted 66th overall in 2009, the Saskatchewan farm boy signed an entry-level contract in 2011, splitting last season with the Sabres and the Amerks.

He grew up about a three-hour drive from the Badgers in Madison, and played with highly sought Justin Schultz. McCabe respectably earned 9 points in 26 games as a freshman at Wisconsin—not really a points producer, but valuable at both ends. He sees the ice well, has great skating ability, and is an absolute pest for offensive opponents. After winning gold with the United States at the 2011 U18 World Junior Championship, the Sabres took him as their second pick in 2012. His confidence shined through his two years with the United States National Development Program, “I’m a two-way defenseman. I’m used in all situations, I’m comfortable in all situations. I think I’m a leader. I’m out there blocking shots for my teammates, and that’s what I enjoy doing. I’m a competitor, that’s when I’m at my best.” 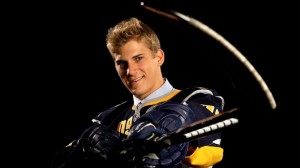 Though brother Nick plays for the Columbus Blue Jackets, the hometown boy’s father Mike Foligno, played for the Sabres back in the 80’s. Buffalo scouts saw Foligno’s greatness with the Sudbury Wolves for four seasons, in which the last he gathered 59 points in 47 games.  The captain of the Wolves was taken 104th overall in 2009, and locked into a three year entry-level contract in 2011. Earlier that year, as a dual citizenship Canandian-American, he earned silver with Team Canada at the World Juniors. A couple months later, he was named the NHL’s Rookie of the Month with 11 points in 11 games with the Sabres. Foligno can score in dire situations but is much more effective with his defensive game. The energetic leader with great size (6’3, 222 lbs.) is leading the Amerks so far this season in points.

The Finnish first round pick from 2011 is supposedly the next Thomas Vanek scoring sensation. Using his 6’3 frame, he’s a strong stick-handler and powerful heading to the net—especially on the power play. He’s eager for the puck, either to make plays or finish them with his deadly wrist shot. Coaches of Assat-Pori in the Finnish league rave of his hard work towards improving all aspects of his game. Armia represented Finland for the U18s and the U20s at the 2011 World Juniors, and was signed by the Sabres this past June to an entry-level deal.

The 12th overall pick at the 2012 Draft was part of silver-winning Russians at last year’s World Juniors, as well as the bronze 2011 U18 squad. Grigorenko finished off with 85 points in 59 games last year with the QMJHL’s Quebec Ramparts, and is off to a strong start this season—31 points in 16 games. His long frame allows him to protect the puck well, but it’s his offensive game that’s truly impressive: he can shoot, he can pass—proven by winning the title of CHL Rookie of The Year 2011. Buffalo quickly jumped and signed him to a three-year entry-level contract in July, with high hopes.

Of course my crystal ball is as grey as Dominik Hasek’s sideburns. If these predictions don’t pan out exactly as shown I can only blame my lack of Delorean. Though thankfully, the bright future of the Sabres isn’t the least bit foggy.