A Veterans Day matinee at the Times Union Center, saw a seesaw battle between the Norfolk Admirals and Albany Devils.  The lone AHL contest on the Monday slate, encompassed a plethora of scoring.

Norfolk got on the ledger first in the first.  On a 2-on-1 break, a Luca Caputi pass intended for Chris Wagner, went off the stick of Devils defenceman Alexander Urbom and past netminder Jeff Frazee.  It was Caputi’s first of the year and gave the Admirals a 1-0 lead.

Albany would strike back soon thereafter.  Steve Zalewski was able to drive to the net, where Chad Wiseman was able to pound a loose puck past Frederik Andersen, to knot it at one.  For Wiseman it was his second of the season and first since opening night.

Midway though the second, with each team skating four aside, Brandon Burlon sent a pass the length of the ice on the left side to Zalewski, who hit his fellow Central New York native teammate, Tim Sestito.  Sestito summarily lifted a backhander into the Ads net, posting his first marker of the year and putting Albany up 2-1.

Yet in the third, momentum took a huge steer in Norfolk’s direction, especially on the power play.  Battling behind the net, Devante Smith-Pelly hit a wide open Peter Holland in the slot.  Holland drilled home his sixth of the year and just 32 seconds into the period, the game was squared at two.

Not long after, the Admirals revved up the offense again on a 5-on-3 power play.  Just three seconds in to the first minor, Holland won the draw back to Sami Vatanen, who fed Kyle Palmieri for a one-timer howitzer goal.  Palmieri’s fifth, lifted the Ads back in front.  Still up a man, Norfolk didn’t waste any time doubling that advantage.  Pressuring the puck around the boards, Vatanen sent the puck behind to Caputi, who made a sharp backhand drop pass to the hard charging Palmieri for the goal.  Palmieri’s top-shelf tally was his second power play goal on the afternoon and sixth of the season.

As the period progressed, Norfolk was once again up a man and appeared to have a firm grip on the low scoring Devils.  Albany continued to chip away though and made things happen.  With a scramble in front, Norfolk almost looked to freeze as the lay loose behind their keeper.  That’s when Matt Anderson jumped and put the biscuit in the net for the shorty and his third goal of the year.

Then in the waning minutes of regulation, with the teams skating 4-on-4, the Devils were able to move the puck again.  That’s when defenceman Adam Larsson (who doesn’t shoot nearly enough for the kind of shot he has, in this writer’s opinion) slapped one home from just beyond the right circle, besting Andersen with a high riser over the right shoulder.  Larsson’s equalizer was enough to help push the game into overtime at 4-4.

While neither team registered a shot in the extra session, Norfolk’s Vatanen whistled one off the crossbar.

During the shootout, Joe Whitney recorded the lone Albany goal, while Holland and Patrick Maroon helped to put one in the left column for Norfolk. 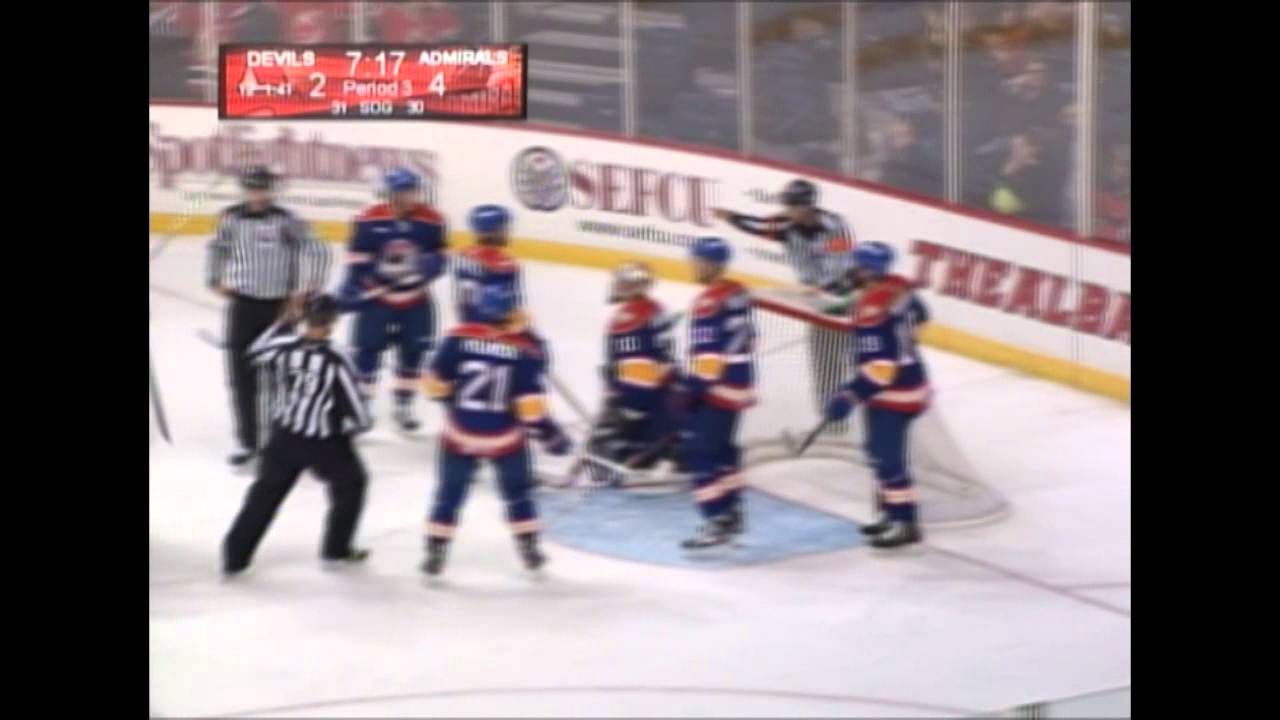