Part 1 of Religion in Hockey

More and more elite athletes are opening up about the role of religion in their chosen sport and recently also becoming vocal about their beliefs. One hockey player in this category is the longest serving current Windsor Spitfire OHL player and captain Saverio Posa.

A quick look at his twitter page shows the quote “Everyday presents a new challenge and I don’t know what tomorrow holds… But I do know who holds tomorrow and that’s My Lord and Saviour Jesus Christ”, providing a good insight into the players beliefs. Saverio recently participated in a Q&A with THW, talking about his hockey career so far and how religion has contributed to his game.

Growing up in Grand Blanc- Michigan, when did you start playing hockey? Was your father Victor, a former NHL player for the Blackhawks, a big influence in getting you involved in the sport?

Well I started playing organized hockey when I was about 5 years old so I wasn’t that good at the start by any means so I just played hockey right next to my house. And yeah my dad was a huge part because ever since I could hold a stick in my hand my dad has always pushed me to play the game and took the time to help me develop so then it started to grow on me the better I got.

Which team did you grow up cheering for and who were your hockey/sporting idols?

Well when I was really young I used to be an Anaheim Mighty Ducks fan but only because I liked the animal. Then I started to be a fan of the Wings but seeing how big of a fan my dads family was of the Leafs, I started to become a Leafs fan and it’s been the same ever since. When I was younger I used to really look up to my dad and just seeing everything he had to go through to make it to the top. Now I am also a big fan of Tim Tebow and how hard he follows his faith and how he handles himself on and off the field, he is definitely someone I try to model myself after.

What was your hockey background before being selected by the Windsor Spitfires in the 15th round of the OHL draft in 2008? Did you have any idea you would be selected and make such an impact in the league so soon?

Before I got drafted, I played in the triple A program for about 6 years, 2 years with Belle Tire and then 4 with Little Caesars but I knew I wanted to play in the OHL the second I got drafted. I always knew I could go back to school so I spent numerous times praying that God will allow me to be a part of such a great organization and my workout routines became even more intense because I knew I wanted this. Then sure enough I made the team and I have never looked back

In 2011, you were selected to participate in the LA Kings training camp. How was that experience for you? 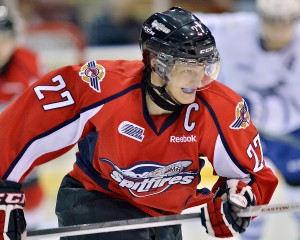 It was was quite an honor. The team has such history in their past and to be able just to represent the crown on the front of the jersey was definitely a blessing and something I will never forget.

Who would you say was the best player you ever played with? Which team-mates have been the biggest influences on your development?

I don’t think its a big secret that Taylor Hall was probably the best player I have had the privilege to play with but it was a guy like Adam Henrique who really showed me the true definition of puck poise and reading the play. I also played with a kid in the triple A program named Rocco Grimaldi who showed me the definition of hard work and that size doesn’t matter.

You are very open about your Christian faith, was religion a big part of your life growing up?

To be honest Christianity was always something I just kind of went through the motions with until I was about 13 when I saw my buddy Rocco Grimaldi use Christianity in his everyday life and so seeing how big and important it was to him, I knew there was something more to serving God than what I was doing.

How have your beliefs helped mould you into the successful player/leader you have become today? Have they made you a stronger person, which translated directly into your game?

It’s the biggest part of my life. I like to base all my decisions off what God would like me to do. I think of that every time I am on the ice. It helps push me to my peak because I know that’s what God would want from me. So one thing people would know when I hit that ice is that I am going to give 110% every time I am out there. And I think that’s a way for the other guys on the team to push themselves.

While many Christian players have been drafted into the hockey world, it seems there is currently an influx of players such as yourself, Rocco Grimaldi and J.C. Campagna to name a few, that are very vocal with their beliefs when speaking to the media. Do you see this as a new trend in hockey? Do you think players in other sports such as Tim Tebow have paved a path for young Christians to feel more secure in vocalizing their beliefs?

I think so personally. Even though there are many athletes who vocalize their beliefs, I am learning of more and more current athletes who have given themselves over to God. Just seeing guys like Tim being so open about their beliefs, it helps you realize you are not alone in this and you also pick things up on guys like that and it provides confidence when you voice your opinions yourself.

There are many Christian hockey stars playing in the NHL today including Mike Fisher, Shane Doan, Jarome Iginla, David Booth and Dan Hamhuis. Do you see these players as role models and is it a goal of yours to emulate their achievements?

Absolutely. I have seen guys like Mike Fisher making books about his faith so it helps push myself to be a better Christian and a better hockey player every time I see it. The way these guys control themselves around people and different temptations that come with hockey, it’s definitely a learning experience.

There are many Christian charities, such as Hockey Ministries International (HMI) who work with young players overseas, teaching them hockey skills as well as religion through pro-hockey instructors. How important do you think programs like these are and is this something you, as a young Christian hockey player, will aspire to be a part of?

I think the importance is very big because especially for young Christian athletes who haven’t got a taste of what temptations lie ahead, they need to know that serving God is most important and if they can withstand the temptations for something better, it is all worth it in the end. So being a part of this and stressing the importance to upcoming athletes is something I am more than willing to do.

While not known as a fighter, you have a few bouts to your name in the OHL. Generally, fighting and religion don’t go hand-in-hand, is this something that goes through your mind when sticking up for a team-mate?

Well it says right in the Bible to be meek not weak. Of course I take God wherever I go but if I feel its time to stand up for myself or one of my team-mates I am certainly going to do it.

What has been the best moment of your hockey career so far?

My best moment probably comes down to two things, either winning the Memorial Cup in my first year in the OHL or winning my first national championship back when I was playing for Little Caesars, both very successful years.

Lastly, as one of the best stay-at-home defenseman in the OHL and a leader of the Spitfire team, where do you see your career progressing after next season? What is your ultimate goal in hockey?

It’s really hard to tell at this point. I am certainly going to try and have a really good last season in the OHL and make it hard for the NHL teams not to sign me. I am going to give it everything I got and leave the rest with the Big Man.

As a Memorial Cup champion, Spitfires’ captain and known as one of the most consistent blue-liners in the OHL, Saverio is just another athlete proving that having faith, mixed with discipline and hard-work in your everyday life can lead to great things. We wish Saverio the best of luck in his final OHL year and hope to see him in the NHL soon!