A Couple of Giants on Ice.

There’s a little known hockey club in Ontario called The Guelph Giants, who played in the Special Hockey International tournament at Kitchener a couple of weeks ago that got a huge shout out from Don Cherry on Coach’s Corner on Saturday night March 23. I sat in awe watching this tiny kid on the video, skating on single blades slowly make his way to the pipes to shoot what will forever be one of my favorite hockey goals of all time. Don Cherry may seem crusty, but he has to have a heart of gold to have shared this valuable achievement on Coach’s Corner. Dig out your box of tissues before watching this. You might need them.

The Beginning of a Thousand Goals Begins With a Single Step

This wonderful video lead me to find out the story behind the Guelph Giants and Special Hockey International. It began much the same way all things begin-a little boy sitting in the stands watching older brother play and wanting to do the same. I never really thought about watching an older brother or sister do things and wanting to do the same, as I’m the oldest. I finally comprehended this last month when my younger sister was making a decision to do something, and told me that she figured if I could do it, surely she could. It never occurred to me that my brother or sister might want to do what I do. It just so happens that is a very normal thing. So what if that younger sibling, single, older child or an adult wants to follow in big brother, big sister, mom, dad’s or Wayne Gretzky’s or even Sidney Crosby’s footsteps-only they had a developmental disability? Hockey has a huge learning curve, and normal kids’ and adult leagues aren’t always prepared to work with a child or adult who deserves time and patience.

This is where organizations like The Guelph Giants are working hard to fill a need. Special Hockey International was born in 1992 by a gentleman named Pat Flick who was a minor league hockey player. He started out with two deserving children and formed the Grandravine Tonadoes. Reading about Mr. Flick’s endeavor in an airport, Tony Sansone picked up on the dream and worked two years to find ice time and launched St. Louis’ Gateway Locomotives and invited The Tornadoes to a tournament. This began a wave of programs helping challenged children and adults play hockey in towns like Guelph. 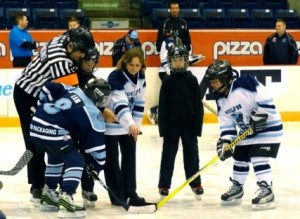 Flash forward to today and we find more than a dozen teams and a yearly four day tournament for these handicapable children and adults through Special Hockey International. This year’s tournament was held in Kitchener, and it was an amazing success. One of the many secrets behind this remarkable achievement in hockey for all is people like Derek Brodie, the Guelph Giants Charity’s President. He works to get people into the program in Guelph, to “Create a culture of hockey for life.” For people of all ages. It’s about “fulfilling potential” said Mr. Brodie.

Standing On Your Own Two Feet

Each person who signs on to this wonderful program formulated under the Canadian Special Hockey Association and American Special Hockey Association, gets to play. I asked Mr. Brodie if the kids used double blades, and he told me, no. “Double blades gives a false sense of security.” They play, learning the same way the pros learn. From the beginning. They learn to stand on the skates for however long it takes, and then they take steps, and then skate, and so on. All at their own rate of ability. It may take someone a while to learn-a long while, and parents are told it’s individualized, everyone has to stand, before they skate as in life. All participants play in all games and, no scores are kept. They don’t engage in contact, and no one serves penalties. They play for the joy of it. They have fun, and make many friends. Each child gets to shine in their own right and level of play. Derek Brodie told me the boy who the video centers on worked more than a year to get to the point where he was able to make his own goal. Fortunately for us, it was caught on video at this year’s tournament.

The Beauty of the Background Sounds

This is the same video without the background music, but with the background sounds of the parents and fans in the rink. Believe me when I say it’s worth a second look just to hear how happy the family is to see their son who had been working on just standing on skates, move beyond that out on the ice and make his way to scoring a goal. For the parents of this awesome child, this goal without doubt was every bit as precious to them as Sidney Crosby’s parents likely felt upon his making his first goal in the NHL.

In talking with Derek Brodie of the Guelph Giants, I learned how important hockey is for the people who this valuable program exists. The biggest challenge is getting even one more person to know about it and to get more kids and adults with special needs on the ice. Brodie put it best, “It’s about the bigger win for all of us.” When one person succeeds we are all better for it. These hockey programs change lives, they create good overall gross motor skills and encourage self esteem. Happier children and adults are healthier, it’s a fact. And another fact that seems like a question, but we hockey lovers know isn’t, is who doesn’t want to play hockey? I know I do, but I’d have to learn to stand before I skate. The Guelph Giants is the perfect safe place for someone who is challenged by the world to find a place to have fun and make friends while playing Canada’s and my favorite game.

The hard fact about such a wonderful program like the Guelph Giants is that they do need our help. Just like the young boy and the awesome goalie helping the smaller boy in the video, we need to support these programs. This is a lesson from Mr. Rogers, that when in need, look for the helpers, you will always find people who are helping like Mr. Brodie. These life altering programs rely on volunteers to help with coaching and support, providing new or gently used equipment in all sizes, and charitable donations. If you donate to anything this year, donate to this group. I was impressed that Mr. Brodie called me back and took time to do an interview, all for the love of a great program. While the Guelph Giants scored one goal of sublime satisfaction caught on video, there are many more goals to be made. Help to make Derek Brodie’s goal of hockey for life for all desiring people come true. Take a note from Mr. Rogers, you can be a helper here. You can volunteer, help, or donate to the The Guelph Giants by contacting guelphgiantshockey@gmail.com or mail: The Guelph Giants, Attention to: Derek Brodie, 7 Summit Crescent, Guelph ON N1H 1S2. All donations from Canada will receive a charitable tax receipt.
All photos and videos are provided courtesy of The Guelph Giants Hockey Ca.